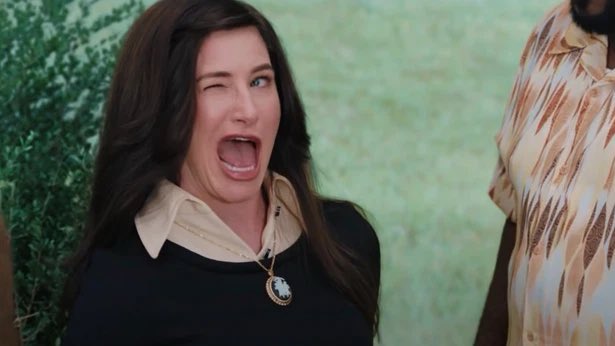 Fans of Marvel’s WandaVision are calling for a Kathryn Hahn Emmy nomination. The actress is proving to be a huge hit with viewers for her role as Agnes: Westview’s nosey neighbor. Since the latest WandaVision episode, Twitter has been ablaze with commenters calling for a nomination for the actress.

Kathryn Hahn has been a hit with Marvel fans since WandaVision episode one. Her role as Wanda Maximoff and Vision’s intruding neighbor has certainly resonated with people. However, it was episode seven that changed everything.

When Hahn was revealed to be playing long-time Marvel villain Agatha Harkness, she really came into her own. Fans on Twitter took note and praised the actress. One fan @redromancva said:

Twitter user @jjman920 had this to say about Kathryn:

Even pop culture news outlet BuzzFeed got in on the action:

We will have to wait and see if Kathryn Hahn gets an Emmy Nomination. However, according to the Emmy website, the eligibility period isn’t up until May 31, 2021. This means if the organization takes note, she could well be nominated for the award!

Who is Kathryn Hahn?

Hahn has made waves thanks to her performance as Agnes in WandaVision. She has featured in every episode so far, and her spooky demeanor led many to think there was more to her character than meets the eye. This became increasingly obvious when she wore a witch costume in the Halloween episode.

Agnes has always been full of personality and always appeared right at the correct moment. She was seemingly aware of Wanda (Elizabeth Olsen) and Vision’s (Paul Bettany) powers, and now we know why.

Episode seven revealed her to be Agatha Harkness, a Marvel Comics villain that has tangled with both The Avengers and The Fantastic Four. Notably, the character often refers to her husband “Ralph”. This has led some to think that she may be working with the demon Mephisto, while others think “Ralph” could actually be Ultron.

Why does Hahn deserve an Emmy award?

While none of the Twitter users outright say it, it’s clear that Hahn’s versatile performance has won their hearts. The Agnes actor is no stranger to stardom and has featured in several well-known television series and movies including Bad Moms, The Secret Life of Walter Mitty, and Anchorman: The Legend of Ron Burgundy. Marvel fans will also remember her as Doctor Octopus in Spider-Man: Into the Spider-Verse.

Notably, she also starred in comedy series Parks and Recreation. Basically, Hollywood and the red carpet are not new concepts to this lady and she has played a diverse set of characters, proving her acting chops time and again.

Indeed, her step into the Marvel Cinematic Universe has shot her into the mainstream and showed everyone what she’s capable of. Hahn’s Agnes is one of the many fantastic elements of this revolutionary show that has endeared fans towards WandaVision.

She’s helped prove that Marvel is capable of doing television, and can produce a stellar drama series (with a little comedy thrown in) as well as excellent movies. While the whole cast and crew are stellar, for many fans, Hahn is a clear standout.

Yes, she’s become a beloved character already and stands alongside fan favorites like Monica Rambeau, Jimmy Woo, and Darcy Lewis. Oh, and Wanda and Vision, of course. And Pietro. And Tommy and Billy. Ok, the cast is just amazing all around.

More Agatha to come in WandaVision episodes eight and nine

The twist ending of WandaVision episode seven was an expected surprise, but still a great one. Agatha Harkness is now looking to be the main antagonist of the series, potentially alongside Pietro Maximoff (Evan Peters).

However, something tells us all isn’t as it seems with Pietro. With the hint towards the Nexus‘ introduction, we’re still not certain that he isn’t the Fox X-Men universe version and is just under Agnes’ mind control.

With all of this evil magic in Westview, perhaps the crazy cameo that Elizabeth Olsen was referring to wasn’t Peters (as he was on the IMDb cast list, but someone else). If there is a magical disturbance, it stands to reason that Doctor Strange (Benedict Cumberbatch) would be there to sort it out. Olsen is due to star in The Multiverse of Madness alongside him, after all.

Regardless, we hope there is more Agatha Harkness and far more Kathryn Hahn still to come.

WandaVision is a Disney+ exclusive series that stars Paul Bettany as Vision, Elizabeth Olsen as Wanda Maximoff, Kat Dennings as Darcy Lewis, Randall Park as Jimmy Woo, and Teyonah Parris as Monica Rambeau. If you are not yet signed up for the streaming service, you can get started here.

Is a Kathryn Hahn Emmy nomination likely? Let us know in the comments below.