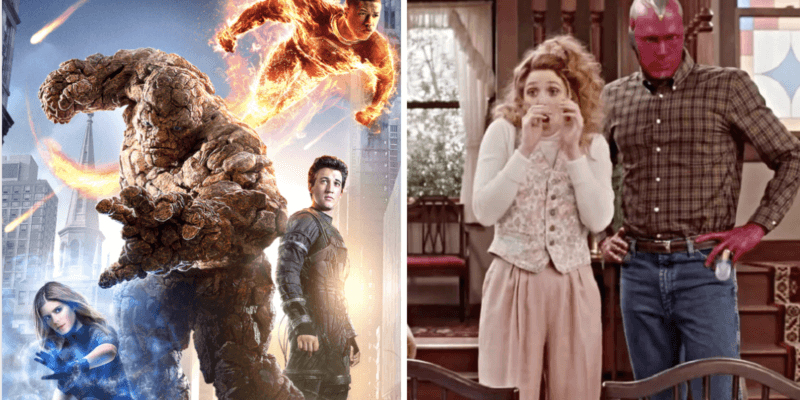 Marvel Studio’s first Disney + series, WandaVision, has taken the MCU fandom by storm. Last week’s viewership topped the world. Marvel fans digest every moment of the show hunting for every Easter egg and WandaVision has not let audiences down. Every episode reveals a little more about what is going in Westview.

Wanda Maximoff/ Scarlett Witch (Elizabeth Olsen) has a created her own hexagon-shaped reality over the town to live out  idealized suburban lives with her deceased husband, Vision (Paul Bettany).

All the while, a team of S.W.O.R.D. agents, led by Director Hayward (Josh Stamberg), have been trying to figure out how to take down Wanda. Monica Rambeau (Teyonah Parris), FBI Agent Jimmy Woo (Randall Park), and Darcy Lewis (Kat Dennings) are working against the clock to find out what, exactly, is going on.

In episode five, “On a Very Special Episode…“, Monica and Darcy tried to figure out how to get back inside “the Hex” without falling under Wanda’s control. They came up with a “10,000-pound fallout shelter comprised of lead for photons, cadmium for neutrons, and tantalum for seismic blasts, on wheels.” It is a tough challenge, but in what appeared as a throwaway line, Rambeau revealed she knew an aerospace engineer who might be up to the task.

And, so, the theories dropped and spread across the internet. Speculation ran wild and many fans believed the unnamed engineer might not even be mentioned again. Then, in episode six of WandaVision, “All-New Halloween”, Monica mentioned that the engineer was headed their way to meet-up and try to get back inside the Hex.

Seemingly, this character will be showing up in this week’s episode and with all of this build-up, the engineer is likely to be a major player from the Marvel Cinematic Universe or the comic books. So, who could it be?

Related: Next Big ‘WandaVision’ Cameo Might Be A Familiar Avenger

The first name to rise to the top of many lists is Mister Fantastic, the leader of The Fantastic Four. Fans have been clamoring for the MCU to take on Marvel’s First Family ever since the rights were returned to Marvel Studios. Marvel has announced that The Fantastic Four will be getting a movie in this phase of the MCU, directed by Jon Watts (Spider-Man: Homecoming), but no release date has been announced at this time.

Marvel Studios head Kevin Feige and his team have always taken their time to set up characters and build each chapter of the MCU. It would not be out of the question for them to introduce some Fantastic Four characters before they star in their own movie. Episode five even had a sly reference to The Incredibles, a Pixar movie that many compare to The Fantastic Four.

Another Fantastic Four character with an engineering background is Dr. Doom. While Dr. Doom is a villain in The Fantastic Four, he has often taken on the role of anti-hero in comics, and he has his own connection with Wanda. After the ‘House of M’ comic book storyline that inspired WandaVision, the Scarlet Witch moved in with Dr. Doom to recover.

Dr. Doom is also a master of the mystic arts, on top of being one of the smartest scientists in the Marvel Universe. He could bridge the gap between science and magic and get Monica back inside “the Hex” to help Wanda.

It is not necessarily a Fantastic Four character coming to rescue. While WandaVision has been an undeniable success for Marvel and Disney, it is already doing a lot to set up the Doctor Strange in the Multiverse of Madness film that is set to come out in 2022. It is quite a heavy load to have this nine-episode mini-series also introduce The Fantastic Four. So perhaps WandaVision could use a familiar face.

James Rhodes has been underutilized since his introduction in Iron Man (2008). War Machine (Don Cheadle) will be returning to Marvel Cinematic Universe with his own Disney+ series, Armor Wars, in 2022. He could be stopping by WandaVision in the meantime.

The Skrulls are a highly advanced race of aliens with engineering skills to turn a plane into a spaceship. In the post-credits scene of Spider-Man: Far From Home (2019), it was revealed that Soren and Talos (and presumably their daughter) are still on Earth.

One of the smartest X-Men, Hank McCoy/Beast, has a history with S.W.O.R.D. in the comics so a lot of fans are speculating that he could be Monica’s engineer friend. In the comics, Hank is a geneticist and not an engineer, but that does mean that they cannot change that for the MCU.

WandaVision has already put in the effort to introduce some X-Men characters like Evan Peters’s version of Quicksilver/ Pietro. Monica Rambeau’s C-ray also hineds that Wanda’s “Hex” could create mutants in the MCU. The X-Men rights have also recently returned to Marvel Studios, but no plans have been confirmed.

While Beast is a fan favorite X-Men both from the comics and Fox’s film franchise, there is another mutant who more aptly fits the bill. If there is any character in Marvel Comics (besides those already mentioned here and the now-deceased Iron Man/Tony Stark (Robert Downey Jr.) who can build a 10,000-pound rolling fallout shelter, it would be Forge.

His mutant ability is a nebulously defined perception of mechanical energy, and he also possesses magic shaman powers. The combination gives the talent of being able to invent and build any device he needs, including a time machine. While Forge’s appearance might not be a “Skywalker” level cameo, the rumor surrounding that could have been about Evan Peters.

WandaVision has definitely been referencing Wanda’s mutant origins more and more as the show progresses. It has even hinted that Monica may become a mutant before the end of the series. So introducing another potential would fit in the story.

Related: Is ‘WandaVision’ Setting Up A Superpowered Monica Rambeau?

Who do you think Monica’s aerospace engineer could be? What are you looking forward to most in the final episodes of WandaVision? Let us know in the comments below.

Comments Off on Could Marvel’s New Engineer Be Linked to Fantastic Four?