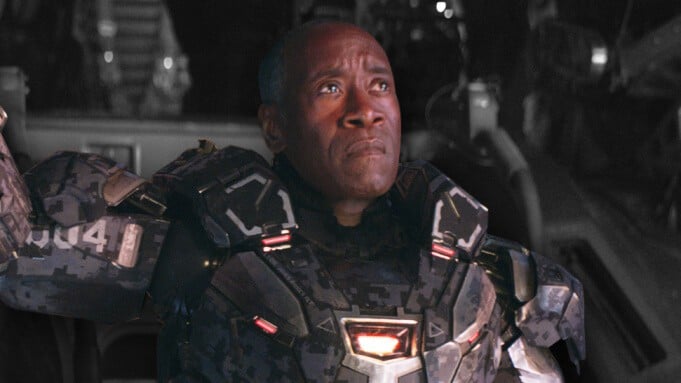 Actor Don Cheadle, who plays Rhodey/War Machine in the Marvel Cinematic Universe, has confirmed that the Marvel Avengers character will return much sooner than many fans expected — perhaps as soon as next month, in fact!

At one point, some Marvel fans thought that Rhodey had exited the MCU for good after rumors about a War Machine movie came to nothing. We did, however, discover this was not the case when the upcoming Armor Wars series was announced.

Now, Cheadle himself has made clear that War Machine is still very much part of the Marvel universe.

In a recent interview with BroBible, Cheadle shared the following:

“It’s really a fun and interesting and, by all imagination, completely open-ended — this can go anywhere. It’s great, I can’t wait to get in the room with the writers and figure out how all those things [connecting Armor Wars to the MCU] happen. You know, Rhodey shows up in Winter Soldier and Falcon’s show. So, it can be a lot.”

Although Cheadle did not yet share exactly how Rhodey will play into The Falcon and the Winter Soldier story — or which episode(s) the character will be in — fans will only have to wait until March 19 to start learning more. Given Rhodey’s American military background, it’s relatively unsurprising that Kevin Feige’s studio decided to have him make a The Falcon and the Winter Solider cameo.

The official Disney+ description of The Falcon and the Winter Soldier reads:

Following the events of Avengers: Endgame, Sam Wilson/Falcon (Anthony Mackie) and Buckey Barnes/Winter Soldier (Sebastian Stan) team up in a global adventure that tests their abilities — and their patience — in Marvel Studios’ The Falcon and the Winter Soldier. The all-new series is directed by Kari Skogland; Malcom Spellman is the head writer. Coming 2021.

Are you looking forward to seeing Don Cheadle’s return to the MCU?