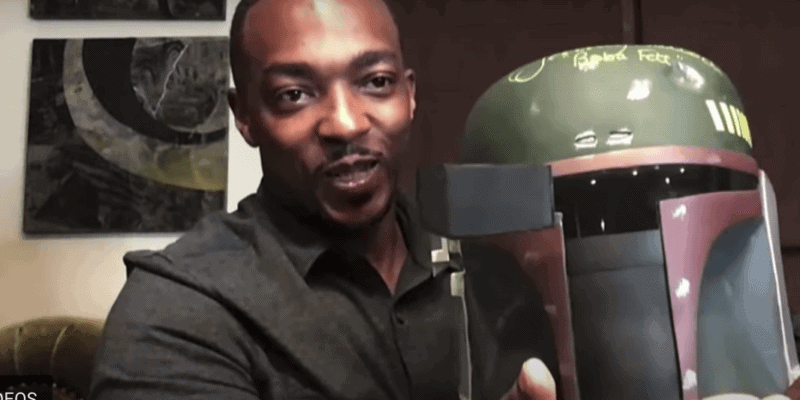 Although Marvel Cinematic Universe star Anthony Mackie might play a different kind of Falcon, the actor clearly loves the galaxy that gave us the Millennium Falcon as well.

Mackie — who recently shared a hilarious story about getting punched in the face by superstar Will Smith, while handing him a birthday cake, of all things — is currently making the rounds doing press for his upcoming film Outside the Wire ahead of the March 19 of highly anticipated Marvel series The Falcon and the Winter Soldier on Disney+.

Now, during a virtual interview on The Late Late Show With James Corden, Mackie has shared a glimpse into his personal Star Wars fandom. Spoiler alert: He LOVES bounty hunter Boba Fett.

In the video [above], Mackie shows off his wild Boba Fett helmet collection, which includes a number of amazing Star Wars collectibles, including a helmet signed by original Boba Fett actor, Jeremy Bulloch, who recently passed away. Bulloch appeared as the iconic beskar armor-clad Star Wars character in the original trilogy films Star Wars: Episode V – The Empire Strikes Back (1980) and Star Wars: Episode IV – The Return of the Jedi (1983) — yes, that was Bulloch during the Sarlacc pit scene with Han Solo (Harrison Ford).

Today, Fett is played by New Zealand-born actor Temuera Morrison in The Mandalorian saga. Morrison is rumored to be filming at least three Star Wars series this year as various Jango Fett clones — Boba’s father, Jango, was the genetic template for the Clone Army of the Republic and for Boba himself.

ComicBook.com shared these details about Mackie’s interview with Corden:

…he also has a motorcycle helmet that was custom made to look like the protective gear of the character. Whether this will lead to Mackie making an appearance in the upcoming Star Wars: The Book of Boba Fett is yet to be seen.

“I pulled this off the shelf, man. My friends who’ve been over have seen this, but no one has ever seen this, it’s never been out of the case, okay?” Mackie shared while appearing on the show. “So, true story, I met a guy who idolized as a kid and I wanted to be this character my entire career. When they recently made a show about him, I told my manager, ‘If I’m not cast as that character, I will never talk to you again, you’ll be eating pork and beans in West Hollywood.’ I wasn’t cast as that character. So I met this actor named [Jeremy], and [Jeremy Bulloch] was the original Boba Fett. I have an autographed helmet, autographed helmet by [Jeremy] himself, as Boba Fett. How cool is that?”

Mackie continued with this story about his custom Boba Fett motorcycle helmet:

From the sounds of things, Mandalorian saga creator Jon Favreau and executive producer Dave Filoni wouldn’t have to pull Mackie’s leg to get him to sign on to appear in their corner of the Star Wars universe, whether in The Book of Boba Fett or another spinoff, such as Rangers of the New Republic or Ahsoka.

Related: Can Marvel’s Feige Bring the Force Back to ‘Star Wars’?

As for Mackie’s next Marvel Studios foray, Disney officially describes The Falcon and the Winter Solider — which is also set to feature Sebastian Stan reprising his role as Winter Soldier/Bucky Barnes — as:

What do you think? Would you like to see Anthony Mackie make the move to a galaxy far, far away?