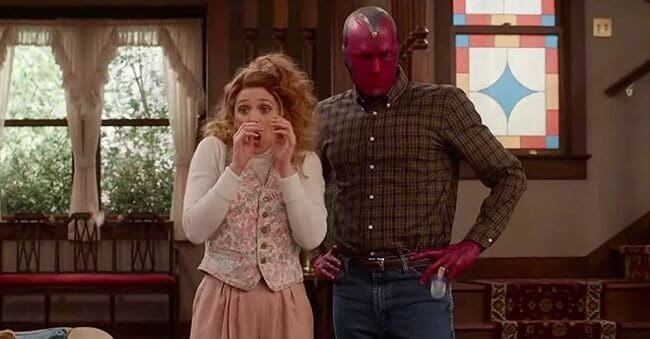 WandaVision — the first project from Marvel Studios to grace screens in nearly 600 days — has taken Disney+ by storm. The love letter to retro television about the Avengers’ seemingly idealized suburban lives has both confused and entranced audiences from the very first episode.

While we’re still not sure exactly what is happening in Westview, Episode 4 (“We Interrupt This Program”) of the TV series finally started giving us some answers.

Dr. Darcy Lewis (Kat Dennings) and Agent Jimmy Woo (Randall Park) began piecing together some of what has occurred in the first three episodes of the new Marvel series by rewatching the sitcoms on a vintage television set.

Lewis and Woo saw everything fans have seen, from Wanda Maximoff/Scarlet Witch (Elizabeth Olsen) and Vision (Paul Bettany) hosting a dinner party in the 1950s to Wanda discovering her neighbor “Geraldine” — actually Monica Rambeau played by Teyonah Parris — knows who Ultron is.

As things begin to come together at the mid-point of the eight-episode first season, Olsen shared in a recent interview that WandaVision is gearing-up for a cameo on the level of Luke Skywalker (Mark Hamill) in The Mandalorian Season 2 season finale episode (“Chapter 16: The Rescue”).

Now, filmmaker, director, actor, and all-around-geek-culture icon Kevin Smith has shared his thoughts on who, exactly, that cameo could be within the Marvel Cinematic Universe.

I know the popular guess for the @wandavision Luke-level cameo is Pietro [Wanda’s twin, Pietro Maximoff/Quicksilver played by Evan Peters] or Dr. Strange [Dr. Stephen Strange played by Benedict Cumberbatch will next appear in Doctor Strange and the Multiverse of Madness] , but my guess is THANOS. The Mad Titan killed Vision, so there’s a chance Wanda might wanna try to kill him again, like she almost did in Infinity War. Could be… inevitable..

I know the popular guess for the @wandavision Luke-level cameo is Pietro or Dr. Strange, but my guess is THANOS. The Mad Titan killed Vision, so there’s a chance Wanda might wanna try to kill him again, like she almost did in Infinity War. Could be… inevitable. https://t.co/SnI8zZ4aij

This actually makes a lot of sense, all things considered. There have even been recent rumors that Thanos could return in Marvel’s Eternals, but Smith’s idea of a WandaVision cameo also tracks.

At this point — particularly given the flashback to Vision’s dead form — it seems as though Wanda herself could be keeping everyone trapped in the alternate reality of Westview in order to give herself and Vision the “classic sitcom” life she (possibly even subconsciously) believes they should have had together.

No matter what happens in the second half of the season, it seems as though Marvel fans are in for a wild ride as we continue our journey through classic television.

Who do you think the Luke Skywalker-level cameo is going to be in Marvel Studios’ WandaVision?

Remember, this is just the first of many new Marvel TV shows coming to Disney+ in the near future. Next up is The Falcon and The Winter Soldier starring Sebastian Stan as Bucky Barnes/Winter Soldier and Anthony Mackie as Sam Wilson/Falcon. The series is currently filming and debuts on March 19.