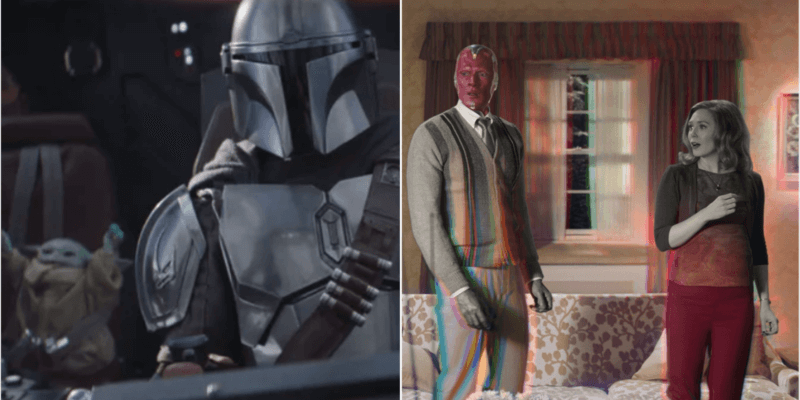 When Jon Favreau and Dave Filoni’s The Mandalorian debuted on the Disney+ streaming service on November 12, 2019, it began changing the face of Star Wars from the very first episode.

All of a sudden, Star Wars — the franchise that had long intimidated newcomers thanks to hardcore fans who saw Star Wars: Episode IV – A New Hope in theaters in 1977 and held too many opinions to count — was accessible to everyone.

The adorable “Baby Yoda,” who we now know is an Order 66 survivor named Grogu, became a pop culture sensation, appearing on everything from cereal boxes to ugly Christmas sweaters. Title beskar armor-clad bounty hunter Din Djarin (Pedro Pascal) provided fans with a Star Wars character to root for as his relationship with little Grogu — and therefore, his entire worldview — has evolved over two seasons.

Showrunner Favreau and executive producer Filoni almost instantly mastered the challenging balance between fan service and telling a brand new story within the Star Wars universe. Since viewers see everything that happens through the eyes of Djarin and Grogu, even old characters are made new again for those who might have never seen the Skywalker Saga original trilogy or animated series like Star Wars: The Clone Wars and Star Wars Rebels.

The series didn’t even deign to assume that all Mandalorian fans knew who Star Wars franchise icon Luke Skwyalker (CGI de-aged Mark Hamill, in this case) was when he made a shocking cameo appearance in The Mandalorian Season 2 finale episode (“Chapter 16: The Rescue”).

Djarin, who is still trying to complete his quest of delivering Force-sensitive Grogu to the Jedi Order after saving him from Moff Gideon’s (Giancarlo Esposito) Imperial remnant, asks Luke, “Are you a Jedi?” to which the lightsaber-wielding Skywalker simply responds, “I am.”

This moment meant the world to longtime Star Wars fans — and, as it turns out, to Mark Hamill — but it was also easy to follow for those who didn’t necessarily care about the Star Wars story whatsoever until “Baby Yoda” came along and changed the face of current American popular culture.

Star Wars: The Clone Wars and Star Wars Rebels’ character Ahsoka Tano’s (Rosario Dawson) live-action debut in Season 2, Episode 5 (“Chapter 13: The Jedi”) was similarly explained in a way that made it simple for both “Star Wars people” and brand new fans to understand what was happening in the plot.

The show, however, hasn’t been as much of a hit with the general public — at least when compared to The Mandalorian.

Forbes offered a full analytical breakdown of the two series, both of which cater to huge, passionate fandoms. Their report noted:

But for general audiences? I also get why it’s [WandaVision] not nearly as accessible as The Mandalorian, which is a straight adventure story while WandaVision is…what, exactly? No one really seems to be sure.

If you’re completely uninitiated, you really can’t just stumble into WandaVision and appreciate what’s going on if you have no clue about the backstory of these characters or what they might be setting up in this Pleasantville-ish, unreal utopia. Meanwhile, it’s easy for even non-Star Wars fans to hop into The Mandalorian and still get on board relatively quickly.

But even if you are an MCU fan, WandaVision is still a bit of a stretch, as it’s wildly different than anything we’ve seen in that universe.

The MCU show, which features Paul Bettany as Vision and Elizabeth Olsen as Scarlet Witch/Wanda Maximoff is certainly intriguing, but lacks the wide appeal that The Mandalorian had from day one — we aren’t going to be seeing “Baby Tommy” plushes on store shelves anytime soon, for example.

The people I probably see appreciating WandaVision the most are comic-readers who are at least familiar with some of the stories this is based on, House of M and Tom King’s Vision, and know where this might be headed, whether it has to do with hints about SWORD, AIM, Mephisto, Wiccan, Speed and a whole bunch of other stuff as we head toward the “multiverse” era of the MCU for the next few years.

In short, no matter how passionate people are about their respective fandoms — and no matter how popular WandaVision ultimately ends up being — the Marvel series doesn’t seem like it will be able to achieve the biggest thing The Mandalorian has been able to do, bring brand new fans into a franchise and hold their attention for the long run.

The Mandalorian Season 3 has been confirmed, but has no official release date at this time. Two of the new season’s spinoffs, Ahsoka and Rangers of the New Republic also have known debut dates.

A third spinoff, The Book of Boba Fett, featuring Temuera Morrison (and Boba’s iconic Mandalorian armor) reprising his role from the second season of The Mandalorian, will premiere in December 2021. The series is set to showcase Jango Fett‘s son after overtaking Jabba the Hutt’s former palace on Tatooine — maybe we’ll even see another Krayt dragon and the return of Marshal Cobb Vanth (Timothy Olyphant).

Subscribe to our newsletter below for all the latest Marvel Studios and Lucasfilm news.