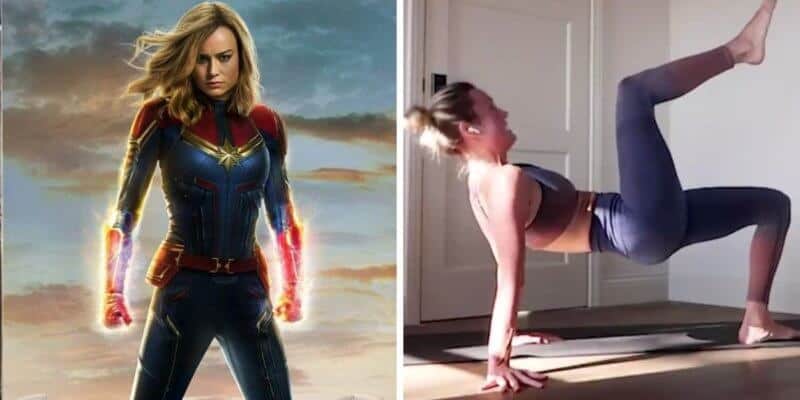 Have you ever wanted to train like a superhero? Well, if so — You are in luck because Captain Marvel herself just shared a workout routine that she likes to follow to help her stay in shape.

Brie Larson, known for playing Captain Marvel in the 2019 MCU film of the same name, recently took to social media to share her very first workout since quarantine began and boy does it look tiring.

The Captain Marvel actress took to Twitter and wrote “Who else records their first workout in months and puts it on YouTube? Come watch (or don’t!)

Who else records their first workout in months and puts it on YouTube?

If you actually watch the YouTube video she posted within the tweet, you will see her go through the workout routine with her trainer Jason Walsh (You may also catch a glimpse of her just eating a cookie instead. Because we all need some motivation, right?)

Her video on YouTube was posted with the following caption:

Hey friends! Thanks for joining. Don’t let this fool you, this was the first time I worked out all quarantine. Big thanks to Jason for virtually getting my muscles to ache (and letting me eat a ? as my pre-workout)! Be sure to follow him below! If you have any suggestions on what you’d like to see me do next, let me know in the comments below!

Related: Train Like Mulan with this 20-Minute Disney HIIT Workout

All joking aside, once Larson and Walsh actually begin the workout (after her pre-workout cookie), they work extremely hard to push themselves to their limits. From sumo stance squats to body saws, these two definitely got their sweat in!

Brie Larson is known for playing Captain Marvel in the 2019 MCU movie of the same name. If you aren’t familiar with the film, the official description reads:

Do you plan on following along with Brie Larson’s workout routine? Let us know in the comments below.