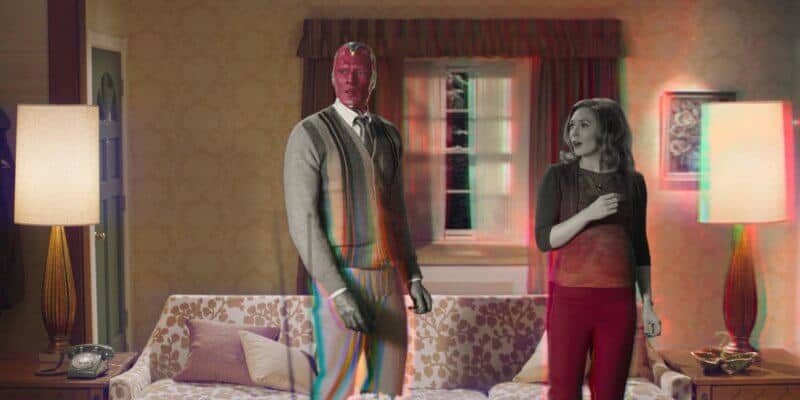 A new day rises — and so does a new theory about Marvel Studio’s first Disney Plus series, WandaVision.

Each episode provides the audience with new clues while adding new layers to the mystery. Eagle-eyed Marvel Cinematic Universe fans latch onto any hints hidden in the series. Fitting with the sitcom motif, WandaVision has given fans pseudo-commercials full of Easter eggs. Marvel fans painstakingly analyze each commercial to determine its meaning. Now there is a new theory that each commercial could be a reference to one of the infinity stones.

The stones were last seen in Avengers: Endgame (2019) when Thanos used the stones to destroy the stones so that no one could use them to undo his infamous snap, which wiped out half the universe. However, destroying the stones might not have destroyed their cosmic powers. Each time the stones have been destroyed in the comics, they have been recreated one way or another.

According to The Collector (Benicio del Toro) in Guardians of the Galaxy (2014), six singularities existed before the creation of the Universe, and it was the Big Bang that transformed their energy into the familiar stones.

In Avengers: Endgame, The Ancient One (Tilda Swinton) tells the Hulk/Bruce Banner (Mark Ruffalo) that “The Infinity stones create what you experience as the flow of time.” Yet time continued to flow after Thanos destroyed the stones, suggesting that while the stones may be gone, the singularities contained within them might still exist.

According to ComicBook.com the commercials each feature an infinity stone:

The first commercial for the Stark smart toaster […] represents the living computer that is the Mind Stone. Episode two’s Strucker Watches commercial is the Time Stone; the HYDRA Soak bath bar that mentally “transports” a housewife to paradise is the Space Stone, and the latest commercial for Lagos paper towels featured a spilled red liquid and themes of fixing a painful reality that speaks to the Reality Stone.

It might seem like a bit of a stretch as the commercials in WandaVision also seem to reference major events in Wanda’s life, but they could be serving a dual purpose.

In The Vision (2015-2016) by Tom King and Gabriel Walta, when Vision moves to a suburban community, a neighbor calls him and his family “fancy, red toasters.” This storyline is one of the major inspirations behind WandaVision. The HYDRA Soak also comes in a blue cube box, like the Tesseract that housed the Space Stone.

The effects of the Infinity Stones still linger in the MCU. Wanda herself got her powers from the Mind Stone in Avengers: Age of Ultron (2015). Then in Infinity War (2018) she was able to destroy it precisely because she was so connected to it.

Carol Danvers/Captain Marvel (Brie Larson) gained her superpowers after exposure to the Space Stone. And the Tesseract will most likely play a part in the upcoming Loki TV series after he escaped with it.

It is also confirmed that Jane Foster (Natalie Portman) with take up the mantel of the Mighty Thor in the upcoming Thor: Love and Thunder. Will she be able to wield Mjölnir because of her previous infection by the Reality Stone in Thor: The Dark World (2013)?

There are still many questions waiting on answers, not just about WandaVision but also what is in store for the future of the MCU as it moves beyond the Infinity Saga.

Do you think the commercials in the last four episodes of WandaVision will reference the Soul or Power Stones?