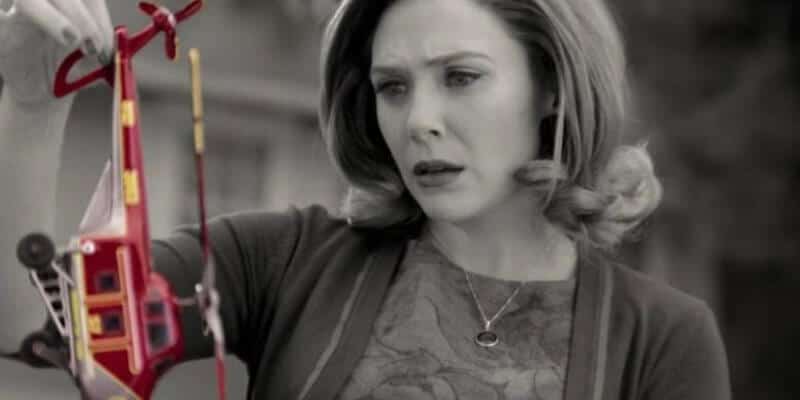 Glued to your TV every Friday when a new episode of WandaVision releases? We are too. If you are like us, then you probably spend time after the episode pondering the possible outcome of the series. Thankfully, Marvel Comics have long served as inspiration for their films and series. One Marvel Comic series that many people are pointing to as inspiration for WandaVision is House of M.

Elizabeth Olsen is of course the actress who portrays Wanda Maximoff, or the Scarlet Witch. Wanda made her first MCU appearance in Captain America: The Winter Soldier, and the character has continued to appear in Marvel films. Now Wanda and Vision have their own series on Disney+ and fans cannot get enough!

An interview from a previous Marvel press tour shows Elizabeth Olsen talking about how she never thought Marvel would follow the House of M storyline!

Related: Does ‘WandaVision’ Have a Villain? Olsen Hints There May Not Be One!

This interview was posted to TikTok by user @alexgregxry and shows Olsen laughing and joking about the House of M storyline and saying how she would like to see the comic series come to life:

Not even the actors had any idea what was coming

Curious about what the House of M storyline and other Wanda Maximoff tales are in the comics? Don’t have time to read up? Elizabeth Olsen has your back!

Related: A Post-Credit Scene For ‘WandaVision’ Could Be Coming

Olsen did an interview four years ago with Allure where she explains Scarlet Witch’s origin story. In this interview, she gives a break down of many potential story arcs for Wanda! It is clear that she has great interest in her character:

We love seeing these interviews from a few years ago! They definitely give us inspiration for more theories about WandaVision, and the possible outcomes for the series.

We know that WandaVision is pulling from multiple comic series, not just the House of M storyline. In the Marvel Cinematic Universe, not everything is exactly the same as the Marvel Comic counterparts. It is great to see a blending of these intricate comic storylines that make WandaVision the perfect mystery for fans!

What Marvel Comic storyline do you think is the main inspiration for WandaVision? Let us know in the comments!