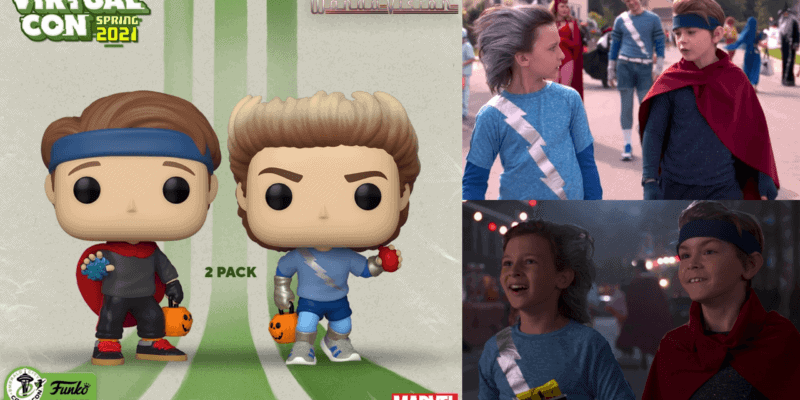 Just like The Mandalorian before it, WandaVision is further proof that Disney knows what they’re doing when it comes to creating gripping television for Disney+. The show has created a huge level of discussion online after every episode and there’s no way you can turn to social media platforms until you’ve watched the latest episode in fear of spoilers!

We always knew that as the show went on, Funko would likely be revealing more Funko POPs to go alongside the MCU series.

**SPOILERS For ‘WandaVision’ Episode 6 Ahead**

In the latest episode, we saw Evan Peters playing Wanda’s brother, Pietro Maximoff/Quicksilver, in a move that we must confess, we don’t quite understand yet. There are a lot of theories as to why Pietro looks like his counterpart from the Fox — now 20th Century Studios — X-Men movies, but we have a feeling that Kevin Feige and the team are going to keep us guessing for a few episodes longer.

We also see Wanda and Vision’s kids, Billy and Tommy, dress-up as their superhero counterparts from the comic books, Wiccan and Speed. In the comics, these two go on to star in the Young Avengers, something we’re pretty sure that Marvel is working on for the MCU. Expect to see these two continue to grow…although nothing has been confirmed.

Thanks to the team at Funko, you can now look forward to owning Wiccan and Speed in their Funko POP form when they release later this year. Details about an exact release date have not been announced for the two vinyl figures, but we think you’ll agree, they look pretty incredible.

All we know for sure so far is that the two-pack of Marvel Funko POPs will be part of Emerald City Comic Con’s Virtual Con this spring.

Will you be picking up Billy and Tommy dressed as Wiccan and Speed when they release later this year? Let us know in the comments below!