'WandaVision' Funko Pops Launch and They Look Incredible! - Inside the Magic 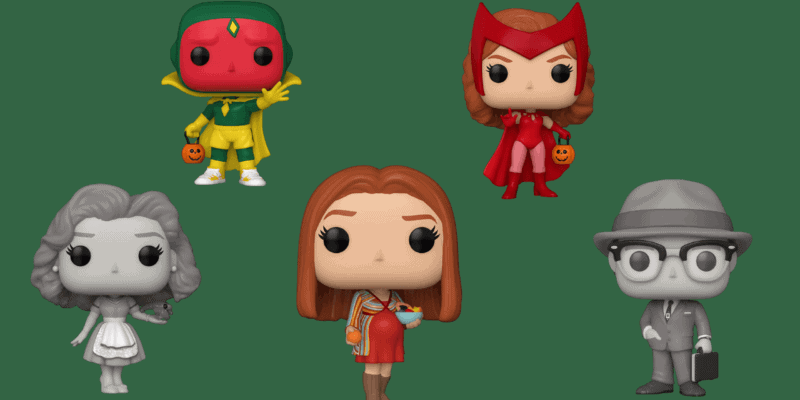 WandaVision is, in theory, just a few months away now with Disney confirming that the upcoming series is set to be released in 2020. Our thinking is that the first episode will drop just after the last episode of The Mandalorian season 2 finishes in order to keep people interested in Disney+ over the holiday season.

The Funko Pops for the show has just launched and they are surprisingly varied and bring to life some of the scenes that we have seen from the trailers and images from the show. Let’s take a look at some of the ones on offer…

We absolutely love the retro feel of Wanda rendered in monochromatic shades of grey in this 1950s-style vinyl Funko Pop. Wanda is priced at $12.99.

There are two versions of the Vision retro Funko Pop, the standard one where we see a normal-looking Vision in the 50s and then a rare Chase variant of the figure that sees Vision in his traditional form but in black and white and in a suit. Vision is also placed at $12.99.

This one sees Wanda in her classic comic book Scarlet Witch outfit holding a Jack-o’-lantern bucket. We absolutely love the classic Scarlet Witch costume and we’re really pleased they managed to get it into the show. Halloween Wanda is also priced at $12.99.

Vision also appears in his classic costume as he first appeared in Avengers issue 57 that was released back in 1963! He also matches Halloween Wanda by holding a Jack-o’-lantern bucket and is priced at $12.99.

The final two figures are straight out of the 70s and while you can currently purchase the Wanda version from Amazon, the exclusive GameStop Vision figure is yet to go live.

All of these figures are available for pre-order either now or in the coming days and will be released at the end of December.

WandaVision marks the first Marvel show arriving on Disney+ but there are many more to come and include:

Will you be purchasing one (or more) of the WandaVision Funko Pops? Let us know in the comments below!

Comments Off on ‘WandaVision’ Funko Pops Launch and They Look Incredible!