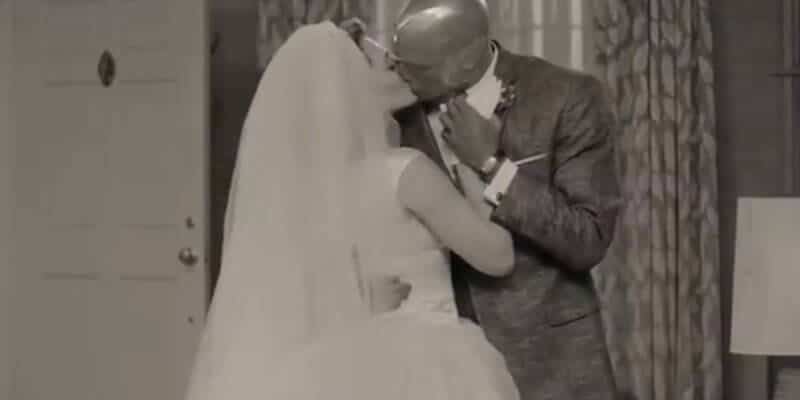 Disney+ has been developing Marvel’s WandaVision for some time now and the debut is almost here. Although the series had faced some minor production setbacks sue to the ongoing pandemic, they have decided to move forward with a December 2020 release.

Marvel fans got a closer look at the upcoming series in the form of a teaser trailer during the 72nd Primetime Emmy Awards broadcast. However, it seems like this trailer has raised more questions than provided answers.

What Is The Series About?

The series has had a very retro look from when fans got a first look at the concept art. During today’s trailer, the retro theme remained the same but with a bit of a twist. The trailer begins with Wanda Maximoff and Vision married, seemingly the perfect couple next door. Then the trailer shows Wanda projecting sparks of what looks like a Bewitched or I Dream of Genie-esque magic, which is fitting of the retro theme. Check out the official trailer from Marvel Studios below:

The trailer then takes a turn as Wanda and Vision are probed with questions from another couple about their past and how they met. The black and white retro look then gets distorted and we catch a glimpse of the couple throughout a a handful of different timelines as well. As not much of this series synopsis is known, this gave us quite the insight of what to expect from the series

What the Future Holds for WandaVision?

We think it’s safe to say to get used to seeing Wanda and Vision explore different decades both in their superhero form and not. We think it’s also safe to say to get ready for a lot of Katheryn Hahn who will be playing nosey neighbor and villain, Agatha Harkness. There’s still a lot we don’t know about the WandaVision series, but we’re excited to see just what direction it will take Marvel fans.

Related: Agatha Harkness might get a major villain role in “WandaVision” Disney+ series

Are you excited for the new WandaVision series? What do you think this series is about? Let us know in the comments!