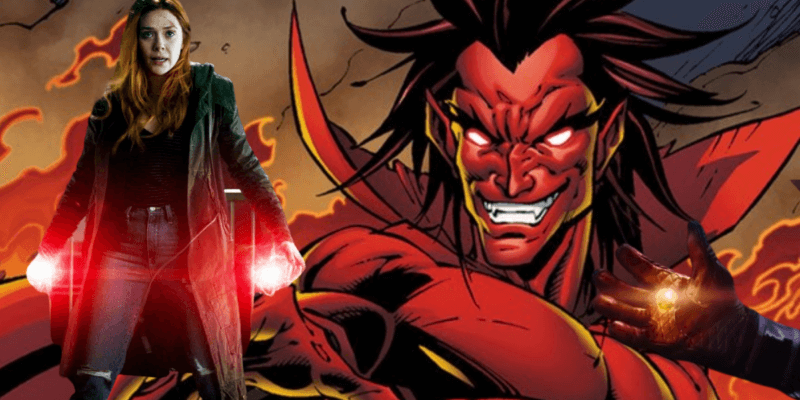 The sixth episode of WandaVision dropped a pretty big hint that we’ll be seeing Marvel’s answer to the devil: Mephisto.

This Faustian character has been a part of several Marvel Comics storylines.

However, there are a few theories as to what the newest commercial in the Disney+ streaming series could really mean.

WandaVision‘s commercials hint to Wanda’s past

As we’ve already seen, the short commercials in each episode have some relation to Wanda Maximoff (Elizabeth Olsen). We’ve seen things like a Stark Industries Toaster and a Baron Strucker watch.

Strucker notably turned Wanda and Pietro (Aaron Taylor Johnson) into Scarlet Witch and Quicksilver. Similarly, Tony Stark was indirectly responsible for the death of their parents in Sokovia.

Some of the commercials are a little less obvious, but they all seem to either refer to Wanda’s past or hint at a future plot point.

What is the commercial in WandaVision episode six?

WandaVision episode six had, by far, the most ambiguous commercial yet. It featured a boy stranded on a desert island who was so hungry he’d “eat anything”. A shark wearing sunglasses then popped up and recalled a time when he was hungry. He then offered the boy “Yo Magic” yogurt, which he said gave him plenty of time to “hang fin”. The commercial seemed to perfectly mimic 1990s Saturday morning cartoon ad spots.

However, things took a dark turn when the boy asks if he could have some “Yo Magic”, to which the Shark replied, “Sure”. He threw the child a container, but the boy was unable to open it. He tried day and night, but eventually wasted away into a skeleton reminiscent of the ending of Indiana Jones and the Last Crusade.

So, what does this tell us about the future of WandaVision?

Nothing concrete, but it does offer some strong grounds for speculation. The shark encounter seemed to a pretty clear metaphor for a Faustian bargain. The boy gave up everything in desperation and the shark told him that he could help him out. But, as with all deals with the devil, it’s never that simple.

While it may all just be a metaphor for Wanda’s loneliness and desire to create Westview and resurrect both Vision (Paul Bettany) and Quicksilver (Evan Peters), we think there’s something more at play. The events of Avengers: Infinity War (2018) and Avengers: Endgame (2019) left Wanda with nobody. It stands to reason that she’d use her magic — “Yo Magic” — to resolve the problem herself, but what if the shark is literally supposed to be a devil?

We’ve never seen Wanda wield such power before. Who’s to say she wasn’t given a devilish boost of extra magic following an unfortunate deal?

Mephisto has yet to make his Marvel Cinematic Universe debut. In the comics, the character is a powerful villain who basically acts as the Marvel Comics version of the devil. He was the one responsible for the infamous deal with Peter Parker which saw Spidey sacrifice his marriage to save Aunt May’s life.

If there were to be a character to strike up a deadly bargain with Wanda, it would probably be Mephisto. In fact, there is precedent for this from the Marvel comics. Tommy and Billy, (Wanda and Vision’s sons) are in fact revealed to be creations by the demonic entity, which sends Wanda over the edge. The witch, Agatha Harkness, wipes her mind to stop her trauma but she eventually suffers a breakdown during the House of M saga.

This concludes with Wanda wishing for “no more mutants“, which decimated the mutant population. Now, of course the MCU currently doesn’t have any mutants (with the possible exception of Peters’ Quicksilver). However, it stands to reason that the advert seen in WandaVision episode six may foreshadow a much bigger villain and some potentially lasting consequences of Wanda’s attack on reality.

It’s also thought that Agnes might actually be Agatha Harkness, a morally ambiguous witch from Marvel Comics. With all of her talk about her unseen husband Ralph, what if he’s actually Mephisto and the two are pulling the strings behind Wanda’s back?

Other theories for what WandaVision episode six could mean

Of course, Mephisto is only one option. Marvel fans may also point to other comic book demons like Dormammu, who we already met in 2016’s Doctor Strange.

We know for a fact that WandaVision will directly tie into the events of Doctor Strange in the Multiverse of Madness, so it seems an appearance from the Sorcerer Supreme is quite likely. In fact, if fans are right and Agnes is actually Agatha Harkness, we may see Strange called upon to pick up the pieces of Wanda’s shattered reality. She’s playing with bigger magic than we’ve ever seen her use and also people’s lives. It’s likely that the former keeper of the Time Stone will have something to say about it.

However, another theory states that the Shark commercial in WandaVision episode six may be referring to the Soul Stone. For those who don’t recall, this infinity stone required a sacrifice of the thing most dearly treasured. Thanos murdered his daughter Gamora to obtain it, while Black Widow sacrificed herself to give it to Hawkeye in Avengers: Endgame.

The return of the infinity stones via the multiverse has been rumored for some time. Perhaps the Soul Stone will have a part to play in how WandaVision concludes. Perhaps the Mind Stone will also see Vision revived for good. We can only wait and see.

Comments Off on ‘WandaVision’ Hints At Mephisto, Soul Stone Return