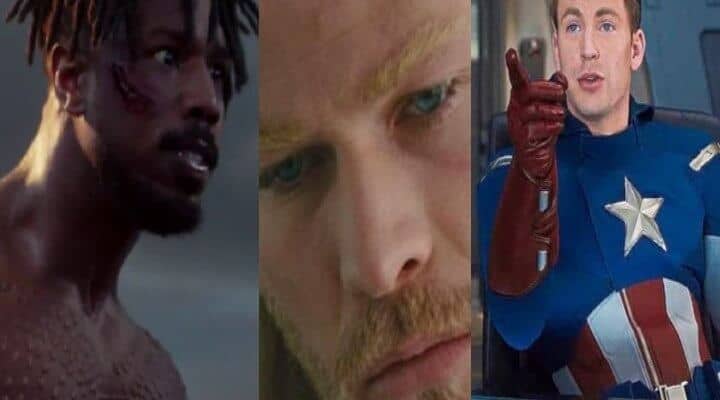 Oh boy. This one is going to be spicy. In honor of both the one year anniversary of Avengers: Endgame (April 25th) and the original release date of Black Widow (May 1st), I thought the best thing to do would be to rank every single Marvel Cinematic Universe movie so far. Every superhero movie made by Marvel is a great movie with its own perks

1) With 23 movies to get through, we’re not going to be able to say a lot about each film; so it’s gonna be snappy.

2) This is an opinion piece. It’s not the ‘correct’ ranking, just one Marvel lovers’ choice. Let us know your list in the comments, but please keep it civil (war).

Often thought to be better than its sequel, Kenneth Branagh’s Shakespearean take on the God of thunder is bland and by the numbers. Good casting can’t save this snooze fest and its weird dutch angles. AND WHAT ARE THOSE EYEBROWS. Chris Hemsworth, I am so sorry they did this to you. Let’s just forget about this scary movie.

Poor Thor. Thank goodness for Thor: Ragnarok Director Taika Waititi because gosh darn it, were Thor’s films dull beforehand. The Dark World keeps the same good cast but pointlessly wastes Christopher Ecclestone as Malekith. Not even a brilliant turn from Tom Hiddleston as Loki can save this film. Next.

The weird stepchild of the MCU / Universal Pictures actually has some things going for it. Though it’s difficult to imagine the character as anybody but Mark Ruffalo, Edward Norton is solid as Bruce Banner / Hulk and the film boasts a surprisingly great soundtrack. It also introduces William Hurt as the brilliant General Ross. Shame about the dodgy CGI though. That Iron Man cameo will never be forgotten; this really signalled the beginning of something more than a sequel; a cinematic universe.

The worst Iron Man by far and I won’t hear otherwise. Mickey Rourke is thoroughly underwhelming as Whiplash and the whole Tony Stark dying plot is redundant. It’s notable for nicely introducing Black Widow and further developing S.H.I.E.L.D, though.

A victim of the insane success of the epic cliffhanger that proceeded it, Ant Man and the Wasp does very little that Ant Man didn’t already do. Also suffers from BMVS, or ‘boring Marvel villain syndrome’.

The first female-led MCU movie is sadly a bit underwhelming. A lack of creative vision leads to a climax without much buildup and a hero who is creatively yanked in a thousand directions. Great work by Ben Mendelsohn though, and it’s important for what it represents in terms of wider representation. The additions of wider cinematic universe characters like a de-aged Nick Fury is also awesome.

Some love it; I think it’s fine. Excellent visuals and a clever subversion of the stereotypical Marvel finale aside, it’s a pretty bog-standard origin story and is largely interchangeable with number 18. Even Benedict Cumberbatch is somewhat dull, though he’s fixed and firing on all cylinders by Infinity War.

Much the same as Doctor Strange and Captain Marvel but ten times as funny. Paul Rudd is a genius addition as Scott Lang and the supporting cast of Michael Douglas and Evangeline Lily are excellent. Another victim of BMVS though, regrettably.

I think I like this one more than most. Largely carried by best man in the universe Chris Evans, this one nicely sets up themes and motifs for future installments and has a surprisingly emotional finale. Also, it actually has a decent villain in Hugo Weaving’s Red Skull! Yes!

I know from my previous OpEd that even having this at number 14 will be controversial. I love Iron Man 3 and you can read why here. In short: Tony Stark’s mental health, leitmotifs, plot subversions, Robert Downey Jr’s performance, and CHRISTMAS.

Everyone agrees this is the worst Avengers movie, but hey, I think it’s still pretty solid. Though it has the most ‘comic booky’ plot of perhaps the entire MCU, just seeing these characters interact always makes this movie worthwhile in my book. James Spader’s Ultron is intimidating, if a little hammy, addition too.

Oh boy; we owe so much to this movie. Iron Man / Tony Stark’s first outing is one of the MCU’s most solid origin movies and its creative risks eventually led us to the formation of a living, breathing universe that many would try to replicate, but only Feige would master. Need I even mention the casting of Robert Downey Jr? Respect.

The most recent entry is a solid one, with a great villain, some amazing, comic book-inspired visuals and a nice use of extended Spider-Man lore. Holland’s Peter Parker is at his absolute best, making for a sensational entry into this cinematic universe that proved that MCU films and this superhero in particular is here to stay. As that woman in Spider-Man 2 shouts; ‘go Spidey, go!’.

Fun fact: this is my favorite MCU movie. But even I can admit that it’s pretty flawed in some places and is far inferior to the original GoTG. However, an amazing score, a beautiful finale, and KURT RUSSELL really work in this one’s favor. Also, it might be the funniest movie Marvel’s ever made.

Thank you Marvel Studios for fixing a character so mistreated by Sony. Tom Holland’s Spider Man is just what we needed; he’s young, he’s hip, and he’s finally making good use of that rogues gallery. Having Iron Man / Tony Stark in a supporting role certainly doesn’t hurt either!

Sort of an Avengers: 2.5, this is where the Russo Brothers really cemented themselves as power players at Marvel Studios. Balancing so many characters, introducing Black Panther, while still keeping the focus on Captain America seems like it’d be impossible; but they managed it. It’s only slightly let down by a somewhat underwhelming villain.

Best. Villain. Ever. (Except maybe Thanos). Ryan Coogler’s vision for Wakanda is stunningly realized, and without the hassle of an origin, we can get straight down to business. The main cast led by Chadwick Boseman is wonderful as Black Panther, but are largely overshadowed by Michael B. Jordan’s charismatic and compelling villain, Erik Killmonger. Needless to say, it’s also perhaps the most important film Marvel has made for giving voice to a cast and crew that needed to be heard.

They actually did it. It’s amazing that Avengers even exists; let alone that it’s tight, funny, and consistently engaging, plus it introduces now veteran Mark Ruffalo to the series! Yes, it looks like it’s a made for tv movie, but who cares. That moment where the camera pans around the team and the Alan Silvestri score kicks in will stay with me forever. As much as I love every character that came next, The Avengers for me will always be Iron Man, Captain America, Thor, Hulk, Black Widow, and Hawkeye. And Phil. Everyone loves Phil. What a stunning pay off to a huge risk!

Talking of taking risks…wow. Indie darling James Gunn, a semi-known pro wrestler, Vin Diesel saying three words, and the guy from Parks and Recreation in a Space Opera comedy? Literally, how did this work? I don’t know, but its fantastic and will always, always cheer me up when I feel sad. I love this movie (3000).

Without a doubt, the greatest cinematic moment of my life will be the opening night crowd’s reaction to the Avengers assembling. This film did it all and so much more. Most amazingly, it concluded the Infinity Saga in a truly satisfying way. Urgh, and that ending for Steve Rogers / Captain America gets me every-time. We laughed, we cried, and we came together as a community. Thank you for this movie, Marvel, truly!

Captain America meets James Bond in a superhero-spy thriller? Ok then! What seemed set to be a pretty standard sequel soon cemented itself as one of the absolute best solo Marvel movies. It’s fun. It’s exciting. It’s thrilling; it’s everything you want from a comic book movie and a stand-out movie in the Marvel Cinematic Universe. I for one can’t wait to see The Winter Soldier back in action on the small screen in The Falcon and the Winter Soldier!

Wow. When you weigh up the positioning of this one compared to Thor and The Dark World, it really hits home how amazingly Director Taika Waititi was able to revive this ailing sub-franchise. Taking Thor out of both Earth and Asgard and into a space-pirate infested hell hole while simultaneously turning him into a huge goofball were the best things to happen to the character as, spoilers; Chris Hemsworth is pretty dang funny! Throw in Hulk and you have an instant classic that is (in my opinion) the absolute best solo Marvel movie. And with the stunning array of MCU movies, that’s high praise indeed.

What? Not Endgame?! Yes, as much as I adore Endgame, if you ask me, Infinity War is the tighter movie. With a firmer emphasis on a core conflict without the complications of time travel, its story is all the more slick and succinct. The first real crossover to present us with a truly interconnected comic book world, Infinity War was a total game-changer. And how can we forget Josh Brolin’s Thanos, who along with Killmonger (and rare early exceptions like Loki) solved Marvel’s villain problem. Bringing back Alan Silvestri as a composer was also a genius move that still makes Infinity War the greatest movie that Marvel Studios has ever made. Roll on the next ten years!

Do you agree with our MCU ranking? Where do you think Black Widow will rank? Which Marvel Cinematic Universe movie is your favorite? Do you love Thor the Dark World? Or are Avengers Infinity War and Avengers Endgame the best in your books? Is Tom Hiddleston’s Loki the best villain around or do you prefer Thanos or Erik Killmonger? Let us know your thoughts and your list in the comments below.

Read Next: How To Watch The Marvel Movies in Order