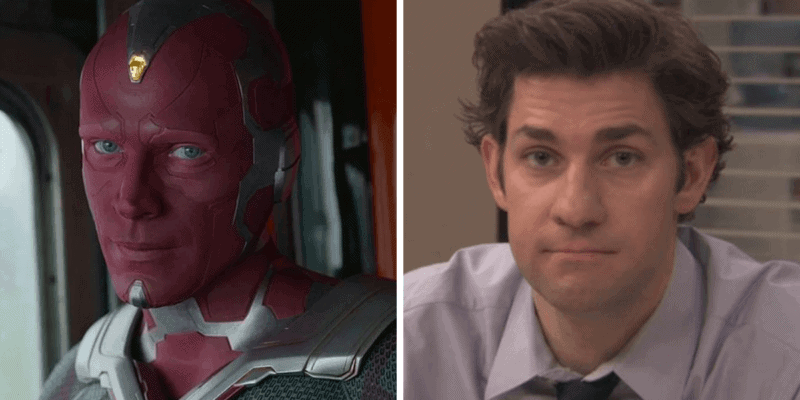 WandaVision had some cracking references to The Office in Episode 7. Most fans noticed that the Disney+ exclusive paid a heck of a lot of lip service to another 2000s comedy — Modern Family.

However, the Dunphy family clearly was not the only influence on the Marvel series. This week also saw several homages to The Office (the US version).

Ok, so we didn’t get the characters in an office like Dunder Mufflin, but the influence was clear.

How did WandaVision reference The Office?

First up, let’s talk about the obvious technique the episode uses. Episode 7 is literally called “Breaking the Fourth Wall”, and for a good reason.

Many of the characters speak directly to the camera, including Wanda / Scarlet Witch (Elizabeth Olsen) and Vision (Paul Bettany). This is a classic homage to The Office, as the series is famous for its face to camera interview segments. Notably, the show is also known for its more organic moments, as characters like Angela Martin (Angela Kinsey), Jim Halpert and Pam Beesly will react to Dwight Shrute (Rainn Wilson) and Michael Scott’s crazy antics by staring into the camera directly for several seconds.

Vision definitely has one of these moments when driving the circus truck with Darcy Lewis (Kat Dennings). Finally, Agnes (Kathyrn Hahn) also looks directly into the camera with glee as she reveals herself to be Agatha Harkness.

However, both Modern Family and The Office are known for breaking the fourth wall, so it isn’t exclusively a reference to Michael Scott (Steve Carell) and the gang. Instead, you may have missed a more subtle reference to the show.

The period-specific theme song for WandaVision Episode 7 reeks of the iconic The Office theme. It uses a blend of synth instruments, a harmonica, and a gentle piano intro.

Consider that it finishes with a suspiciously similar font in lower case, and you have a killer and subtle reference to the awkward mockumentary sitcom.

Marvel fans debated for weeks whether the “modern era” would take after Modern Family or The Office. Well, it turns out it uses both. WandaVision Episode 7 takes us to the present day with style and leaves us guessing what Episode 8 and 9 might look like.

Where could WandaVision Episode 8 go?

Westview is in turmoil. The series revealed Kathryn Hahn as the witch Agatha Harkness and Evan Peters may or may not be Pietro Maximoff. Furthermore, Monica Rambeau is now in the Hex while seemingly resisting Wanda’s spell. Also, she has powers now!

Episode 8 and 9 of WandaVision have a lot to resolve before the miniseries finally concludes. As Wanda’s grip on the Hex seems to be loosening, and characters like Director Hayward (who we still totally think is Ultron) are getting closer, don’t be surprised if things go south for the strongest Avenger (sorry, Captain Marvel and Thor!)

However, we still haven’t seen the return of Benedict Cumberbatch’s Doctor Strange yet. While not confirmed, the actor has been heavily rumored to appear in the series. As we know, Elizabeth Olsen will co-star as Wanda Maximoff in the upcoming Doctor Strange the Multiverse of Madness.

Marvel fans are convinced he’s got to show up to help Wanda and Vision beat Agnes, and maybe even Mephisto. If Pietro / Quicksilver actually is from the Fox X-Men universe, this sets up the movie perfectly. Additionally, the most recent advert segment also hinted at the inclusion of “The Nexus”.

WandaVision loves its iconic sitcoms – from The Office to Bewitched

If you thought the WandaVision Office references were an isolated incident – think again! The show has stood itself out from the rest of the Marvel Cinematic Universe by putting a quirky spin on the formula.

However, it’s also parodied many iconic sitcoms, taking a different direction with each episode. Viewers noticed many parallels in the first episode to the famous sitcom Bewitched. However, there have been many, many influences on the show such as classic sitcoms like The Brady Bunch and even popular horror/thriller The Twilight Zone.

Vision actor Paul Bettany has even said his performance has been influenced by legendary sitcom star and all-around genius Dick Van Dyke. Of course, none of this is new to star Elizabeth Olsen. Her sisters Mary-Kate and Ashley Olsen famously starred in Full House, another classic 80s-90s sitcom.

Which sitcom will they parody next? Whatever happens, we’ll be watching with bated breath!

WandaVision is a Disney+ exclusive series that stars Paul Bettany as Vision, Elizabeth Olsen as Wanda Maximoff, Kat Dennings as Darcy Lewis, Randall Park as Jimmy Woo, and Teyonah Parris as Monica Rambeau. If you are not yet signed up for the streaming service, you can get started here.

Did you catch all the The Office references in Episode 7 of WandaVision? Let us know in the comments below.

Comments Off on Every ‘The Office’ Reference in ‘WandaVision’ Episode 7