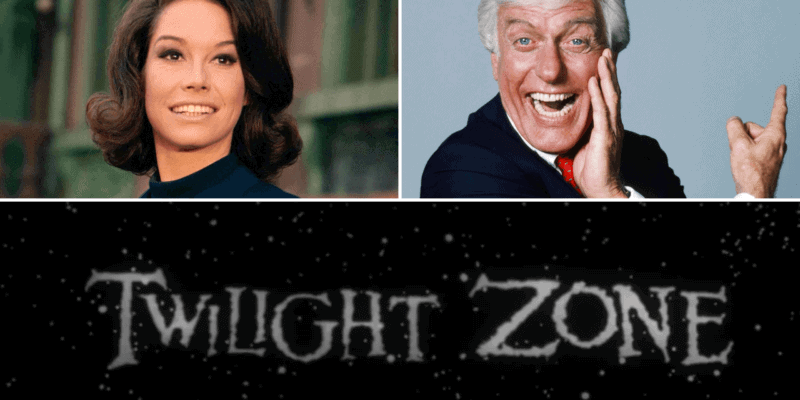 We all know that several classic comedies have inspired WandaVision. But what else were the cast and crew inspired by? Check out all of the WandaVision influences that inspired individual performances and the overall direction of the show.

These revelations come straight from the source as Inside the Magic attended a press conference to promote the launch of the Disney+ original which included the likes of Elizabeth Olsen (Wanda Maximoff), Paul Bettany (Vision), Teyonah Parris (Monica Rambeau), and Kathryn Hahn (Agnes), as well as Matt Shakman (Director/Executive Producer), Jac Schaeffer (Writer/Executive Producer), and Kevin Feige (Producer).

A lot of great information came out of this session, including Kevin Feige’s opinions on Disney+ and The Mandalorian. However, the most exciting part to us at Inside the Magic was hearing Paul Bettany and Elizabeth Olsen discuss how classic television had changed their takes on Scarlet Witch and Vision.

As we all know by now, WandaVision is heavily influenced by sitcoms like That 70s Show, I Love Lucy, and The Brady Bunch. However, when asked about her personal influences, Elizabeth Olsen revealed three classic actors that had shaped her brand new portrayal of strongest avenger Scarlet Witch / Wanda Maximoff. Olsen shared:

“I think it was like an amalgamation of Mary Tyler Moore and Elizabeth  Montgomery, and I think I accidentally threw in some Lucy [Lucille Ball] in the 70s just because there was so much physical comedy.”

These influences aren’t particularly surprising given the first two episodes’ aesthetic, which seems to be set in the 50s and 60s respectively. Vision actor Paul Bettany’s influences drew from classic sitcom antics, as he based elements of his performance on the legendary Dick Van Dyke. However, he also was inspired by an actor closer to home; British native Hugh Laurie, known for British sitcom Blackadder and of course, House. Bettany said:

“He’s  Jarvis, he’s part Ultron, he’s part Tony Stark, and he’s omnipotent but he’s also this sort of naive ingenue. Uh, it, uh, uh, and then I realized, well, I’ll just throw a little bit of Dick Van Dyke in there and a little bit of Hugh Laurie […] little smidges, you know.”

However, it wasn’t just the lead actors on the call. Marvel Studios Boss Kevin Feige attended and was joined by Director Matt Shakman and Head Writer and Executive Producer Jac Schaeffer. Feige and Schaeffer drew attention to a very different kind of show, but one that definitely makes sense as a point of inspiration for WandaVision.

As we can see from the first few episodes, something isn’t right in Wanda and Vision’s world. There is a spooky undercurrent running through every episode and strangeness in all of the characters. Feige and Schaeffer both cite The Twilight Zone, a sci-fi/horror anthology show as one of the most important WandaVision influences.

“Well, we often talked about, when we were in our period sitcoms, that when something shifted from say a Dick Van Dyke or an I Love Lucy style into something that was outside of that that it was going into kind of a Twilight  Zone. You know, we were thinking about what were the period shows that addressed, you know, the odd and the strange, and how could we embrace that? So that’s a little bit about how we approached the-the shooting of it initially, and the look of it.”

Jac Schaeffer cites The Twilight Zone as an inspiration for her own work on the show:

“Absolutely, Twilight Zone is an enormous influence on me personally. Um, I really think that’s  actually kind of how I learned to tell stories.”

Additionally, show director Matt Shakman spoke of a few additional sitcoms you may not have picked up on. Wanda’s powers are definitely used in a similar way to the powers in Bewitched, and the influence of The Dick Van Dyke Show is clear in the show’s tone and Bettany’s performance.

“Lucille Ball, you know, I Love Lucy, Dick Van Dyke.  You can feel the energy of that sort of theatrical performance working with the audience. And then when you get into 60s shows like Bewitched or I Dream of Jeannie, it is a forth wall and all of a sudden it’s much more like doing a movie these days, and that laugh track is all canned and brought in.”

So, there you have it. The coolest project Marvel has taken on has some appropriately eclectic influences.

Related: Sony Pictures Has Its Marvel Universe Name and It’s a Mouthful

Which of these WandaVision influences was your favorite? Let us know in the comments below.