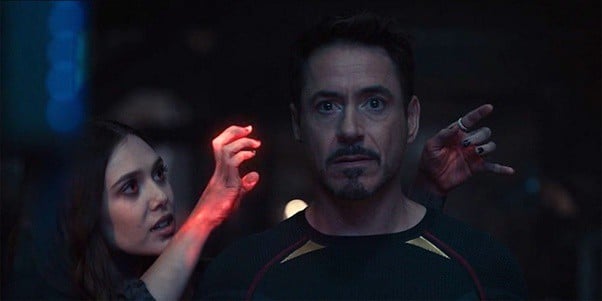 Tony Stark and Wanda Maximoff have had a tricky relationship, to say the least.

The MCU forgot what Tony Stark did to Wanda Maximoff

Lest we forget that the entire reason Wanda and Pietro / Quicksilver (Aaron Taylor Johnson) joined HYDRA was to get back at Stark. The pair watched their parents die as their house in Sokovia fell to pieces around them.

Last week’s episode of WandaVision showed this for the first time. However, it’s easy to forget about Iron Man’s role in all of this. Wanda Maximoff (Elizabeth Olsen) hated Tony Stark (Robert Downey Jr) for the longest time. Indeed, in Avengers: Age of Ultron, Ultron, Scarlet Witch, and Quicksilver are bound by their contempt for him.

It’s only when the twins realize how insane Ultron is and how he plans to destroy the planet do they join the Avengers. However, even then, it isn’t smooth sailing for Tony Stark and Wanda Maximoff. In Captain America: Civil War, Wanda’s lover Vision (Paul Bettany) takes his creator’s side, pitting the two against each other once more.

WandaVision could have resolved this plot point

Look, we know Robert Downey Jr is done with the Marvel Cinematic Universe. Probably. However, Iron Man is an essential part of both Vision (Paul Bettany) and Wanda’s past. With the series getting so reflective in the past episode, it seems sad to not even pay lip service to Stark.

A short scene showing the pair reconciling before the events of Avengers: Infinity War would’ve been ideal. However, even an acknowledgement from Wanda that she and Stark buried the hatchet would’ve sufficed.

Unfortunately, the episode’s only reference to Tony was the ‘Stark Industries‘ logo on the missile. It did, however, give us a glimpse of a young Wanda and Pietro and explained the Scarlet Witch’s fascination with classic American sitcoms like The Dick Van Dyke Show.

Many Marvel fans hotly anticipated the return of Aaron Taylor Johnson’s take on Pietro Maximoff or a glimpse of Tony Stark, but it wasn’t meant to be. Evan Peters’ Pietro is set to return in the finale, however.

How WandaVision refers to the past

Tony Stark and Wanda Maximoff may not have had their relationship resolved, but WandaVision is still intent on looking back. Of course, it’s also looking forward, but a dive into the past is no bad thing.

Several prominent Marvel Studios properties have been referred to, including Captain Marvel and Thanos. Indeed, Jimmy Woo, Monica Rambeau, and Darcy Lewis had a great time discussing who the strongest Avenger is like regular old Marvel fans. They decided that Scarlet Witch was indeed the best, as she would’ve destroyed Thanos had he not called an entire bombardment down from the sky.

Equally, however, the “commercial” segments also reference the past. Stark Industries appeared on a toaster advert, whilst Baron Strucker was referenced via a neat watch commercial. Interestingly, though Stark Industries has appeared a handful of times, no references to the man himself have yet popped up. This is a little odd as he’s basically Vision’s father!

Perhaps episode nine will feature some kind of reference to Iron Man and Vision’s other “dads”: Bruce Banner and Ultron.

However, Tony and Wanda aren’t the only characters who have had a conflict discarded by Marvel Studios. When Avengers: Endgame released, many fans were sad to see that the Incredible Hulk (Mark Ruffalo) never got his rematch with Thanos.

The Mad Titan took down the green giant during the prologue of Avengers: Infinity War. In fact, Thanos beat the Hulk so badly that he was afraid to show his face again. Fans expected a return of the Hulk, stronger than ever to come and whoop Thanos in Avengers: Endgame. Sadly, this never happened. At least we got to see Wanda prove herself as the strongest Avenger, though.

Speaking of the Hulk, we also never got an answer to what happened with Samuel Sterns, AKA The Leader. Hardcore Marvel fans might remember this character from The Incredible Hulk. Marvel fans last saw him mutating after being exposed to some of the Hulk’s blood. He was briefly mentioned in a prequel comic to The Avengers, but we’ve never seen him take on the villainous role hinted at.

In the case of Tony Stark and Wanda Maximoff, it’s unlikely that we’ll see a resolution. Still, there’s always episode nine. We’ve got a feeling it’s going to be a whopper.

What will happen in WandaVision episode nine?

Though it’s unlikely that we’ll see a return of Tony Stark / Iron Man, it isn’t totally out of the question. In fact, some Marvel fans think he may be the “Luke Skywalker level cameo” that has been hinted at by people like Elizabeth Olsen.

Many felt that Evan Peters’ return as Quicksilver / Pietro might be the biggest cameo that we can expect, but we’re still not convinced. Disney and Marvel Studios have a lot of people up their sleeves. We also won’t be surprised to see the return of Benedict Cumberbatch as Doctor Strange, especially as we know that Wanda is now facing the magical Agatha Harkness. Also, we know that Olsen will return as the Scarlet Witch in Doctor Strange in the Multiverse of Madness, so it makes sense.

Furthermore, we want to know why/how Monica Rambeau now has superpowers! The hero has been an Avenger known as Spectrum in the comics, but we wouldn’t be surprised if her powers are related to Captain Marvel.

At any rate, don’t be surprised if the finale of WandaVision dives deep into the multiverse and brings out someone totally unexpected. Loki? Bucky Barnes? Thanos? Taylor Johnson’s Pietro? Who knows. But don’t rule out a return of Robert Downey Jr as Iron Man just yet.

The Marvel Universe is full of surprises, and the X-Men universe’s Pietro may just be the beginning.

The legacy of Tony Stark

It isn’t easy to believe that it’s nearly been two years since we last saw Iron Man in an MCU project. Robert Downey Jr started it all way back in 2008 when he came out with that iconic line. Poetically, he then ended his time with the same phrase in Avengers: Endgame.

Tony was the one to take out Thanos during the climactic battle at the Avengers facility, a battle that the Scarlet Witch was also present for. Sadly, as we’ve mentioned, Tony and Wanda never formally resolved their differences. However, Marvel fans can take solace that she was present at Stark’s funeral, hinting that she had forgiven him for his past deeds.

Robert Downey Jr appeared in 10 movies, not counting archive footage in Spider-Man: Far From Home or the unreleased Black Widow. The actor has made conflicting reports on whether he’ll ever return to the Marvel Cinematic Universe.

Wouldn’t it be wonderful if WandaVision‘s finale surprised us all with one final appearance that settled things between Tony Stark and Wanda Maximoff for good?

Marvel Studios’ WandaVision is a Disney+ exclusive series that stars Paul Bettany as Vision, Elizabeth Olsen as Wanda Maximoff, Kat Dennings as Darcy Lewis, Randall Park as Jimmy Woo, and Teyonah Parris as Monica Rambeau. If you are not yet signed up for the streaming service, you can get started here.

Comments Off on Why Did Marvel Ignore Tony Stark and Wanda Maximoff Relationship Plot?