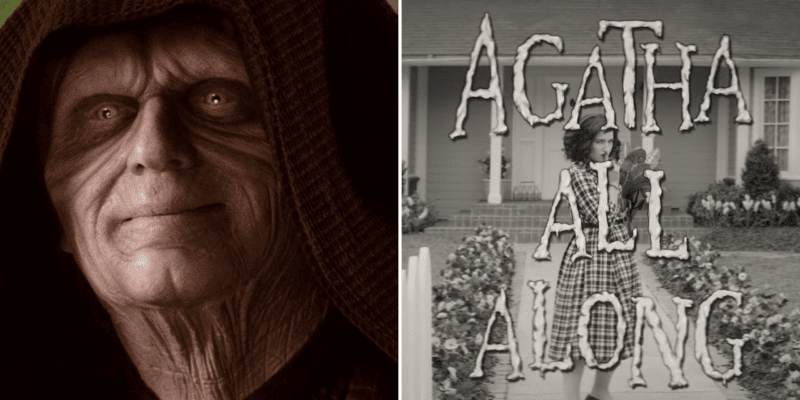 If you WandaVision fans can’t get “Agatha All Along” out of your head, we’ve got a surprise for you: Emperor Palpatine!

A fan has created a fantastic parody of “Agatha All Along” about everyone’s favorite Evil Emperor titled “Palpatine All Along”.

Palpatine parodies WandaVision‘s “Agatha All Along”!

In case you’ve forgotten, the famous song played as Kathryn Hahn’s character Agnes revealed herself to be the witch, Agatha Harkness. This all took place in WandaVision episode seven, much to the shock and surprise of Wanda Maximoff / Scarlet Witch (Elizabeth Olsen). It’s essentially the evil witch’s theme song; something fans can definitely get behind!

The song instantly became a fan favorite, and it even ranked in the billboard charts! However, the song’s legacy has seemingly endured, and it has now invaded the Star Wars universe!

“Palpatine All Along” takes the basic premise of a villain revealing their true identity and applies it to the Star Wars prequels. It’s a genius mix, as Emperor Palpatine (Ian McDiarmid) famously hid his identity for many years before he was revealed to be the Sith Lord, Darth Sidious.

You’ve got to check this one out for yourselves!

Who is Emperor Palpatine?

Sheev Palpatine is a dark lord of the Sith and the main antagonist behind all three trilogies in the mainline Star Wars universe. He works in the shadows during Episode I: The Phantom Menace and Episode II: Attack of the Clones. However, he becomes integral to the action of Episode III: Revenge of the Sith, as he duals Mace Windu and takes on Anakin Skywalker as his apprentice, dubbing him Darth Vader.

Emperor Palpatine lets Darth Vader do the heavy lifting in Episode IV: A New Hope and only appears as a cameo in Episode V: The Empire Strikes Back. He then appears to taunt Luke Skywalker in Episode VI: Return of the Jedi, only to be killed (seemingly) by his apprentice.

Ian McDiarmid then famously returned as The Emperor in Star Wars Episode IX: The Rise of Skywalker, where he is revealed to be Rey’s grandfather. He was seemingly killed for good as the young Jedi harnessed all the Jedi’s power, including Luke Skywalker and Master Yoda.

What is Agatha All Along? And what does it have to do with Palpatine?

Agatha All Along is one of the many, many great things to come out of WandaVision: the first Disney+ exclusive by Marvel Studios.

WandaVision broke new ground for Marvel in more than one way, and including a musical number is certainly a first for the MCU! And yes, that was Kathryn Hahn singing! Hahn was an excellent surprise villain (though Marvel fans had a pretty good idea of who she really was from the beginning). Additionally, she proved to be a fantastic foil for Wanda (Elizabeth Olsen) and Vision (Paul Bettany).

As for Palpatine, Star Wars and Marvel go together like peas and carrots. Of course, both properties are famously owned by Disney. It was almost inevitable that a fan of both series would create an amazing parody like Palpatine All Along! However, unlike Agatha All Along, we don’t think that was the real Ian McDiarmid singing on Palpatine All Along. But we can dream.

One thing’s for sure. Any theme song for The Falcon and the Winter Soldier will never match the unbearable catchiness of Agatha All Along!

WandaVision is available for streaming on Disney+. It’s directed by Matt Shakman and written by Jac Shaeffer. It also stars Teyonah Parris as Monica Rambeau, Randall Park as Jimmy Woo, and Kat Dennings as Darcy Lewis.

Why do we love Emperor Palpatine?

Palpatine has become a beloved Star Wars character, standing strong alongside other classic characters like Obi Wan Kenobi, Boba Fett, and Han Solo. Perhaps its his mysterious visage or his absurd evilness – whatever it is, we love old Sheev.

This dark lord of the Sith has been through many different disciples including Darth Vader, Darth Maul, and Count Dooku. However, only Vader was able to best him in combat. His iconic death at the end of Return of the Jedi might just be the most consequential action in the entire Star Wars universe, and it’s certainly a big part of why we love to hate him.

Additionally, Palps has played a major role in media outside of the Skywalker Saga. His origins with Darth Plagueis have been explored in the extended universe and he also appeared several times in Star Wars: The Clone Wars. Additionally, the “Legends” canon features more than one Palpatine clone!

Alright, so he’ll never be Baby Yoda levels of lovable, but Palpatine is certainly one of the best villains in modern cinematic history; right alongside Darth Vader himself.

What do you think of this parody? Let us know in the comments below.

Comments Off on VIDEO: ‘WandaVision’ Parody: Palpatine All Along!