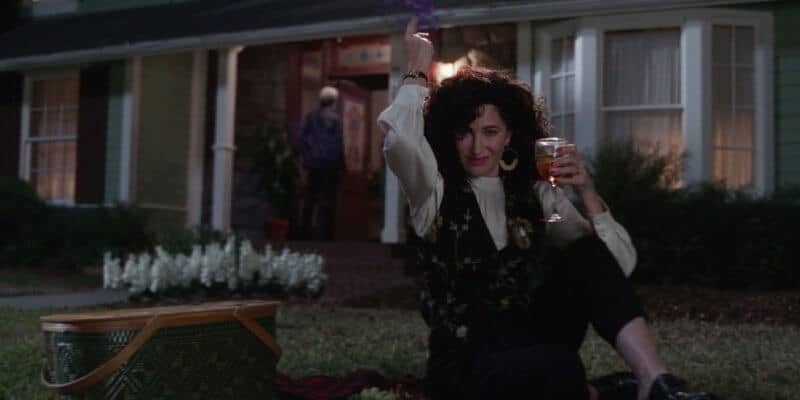 Actress Kathryn Hahn has spoken about her future with the Marvel Cinematic Universe.

She spoke to the New York Times in an interview covered by Comic Book.

Hahn has been widely praised for her role as the witch Agatha Harkness in Marvels first Disney+ series, WandaVision — Marvel fans are eager to see more of her.

What did Hahn say about WandaVision?

Speaking of how Marvel Studios plans future projects, she said, “I have no idea. They keep it really tight”.

When told that fans are keen to see her return, she said, “Oh, me too. Now that I have a taste of it [the Marvel Universe], I’m like ‘Ahh.’ I really, really love it.”

So Hahn is definitely keen to return. Fortunately for Marvel fans, Agatha Harkness was one of the few major characters to survive the final episode of Marvel’s WandaVision. Agatha was trapped in Westview by a merciful Wanda Maximoff, who opted not to kill her. Instead, she ensured that she’d forever play the part of the nosy neighbor, Agnes.

However, Elizabeth Olsen’s Wanda did hint that Agatha may return, as she mused that she knew where to find her should she need her. Unfortunately, the rest of Wanda’s family, including Vision (Paul Bettany) and her two sons, Tommy and Billy, were seemingly erased from her existence. Or so it seems; check out our theory on how Wanda’s boys may have actually survived.

As for Kathryn Hahn, she seemed to love the experience of playing Agatha. Speaking of her fate at the end of WandaVision episode nine, she said:

“I actually don’t think, ultimately, that she minds it. She needed to rest for a hot second. She’s been very restless. I think she was very lonely, for a very, very long time. She loves having the companionship — loves the mailman, loves Ralph, loves Dottie. For the moment, I think she’s actually OK to just loosen the corset and sit and have a muffin and a latte.”

Hopefully, this isn’t the end of Agatha. She, alongside Darcy Lewis (Kat Dennings), Monica Rambeau (Teyonah Parris), and Jimmy Woo (Randall Park), made a fantastic supporting cast. Fingers crossed the next time we see Scarlet Witch and Vision, Hahn will also return (preferably while singing ‘Agatha All Along‘!).

Additionally, this isn’t the first time that we’ve seen Hahn portray a Marvel character. She also portrayed Doc Ock in the 2018 animated film Spider-Man: Into the Spider-Verse.

From Agnes to Agatha Harkness

For hardcore Marvel fans, the signs were all there. We reported early on that the character was likely to actually be an existing Marvel comics character, Agatha Harkness. Indeed, episode seven cleared everything up and we found out that it was “Agatha all Along“.

However, from episode one, Hahn has been a favorite among fans of WandaVision. Long before she was telling Wanda about the prophecy of the Scarlet Witch she was stealing our hearts with her sassy performance. Head Writer Jac Shaeffer wrote a great character, but it was Hahn’s performance that really brought her to life!

Hahn will undoubtedly stand alongside MCU favorites like Mark Ruffalo, Paul Rudd, and Captain Marvel star Brie Larson. She certainly made an impact on our adventures in Westview!

All nine episodes of WandaVision are available for streaming on Disney+. However, some fans are reportedly disappointed in the finale, despite Matt Shakman’s warnings about theorizing.