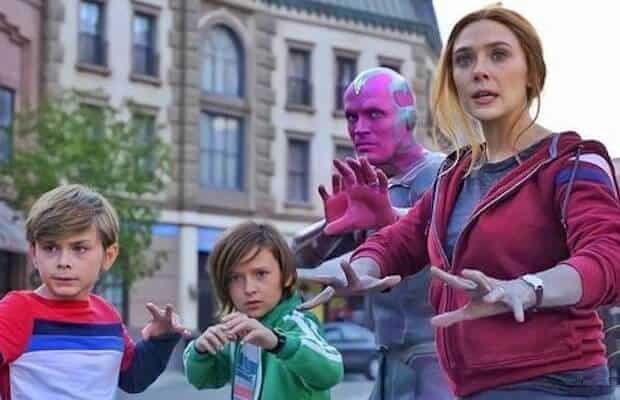 WandaVision is over. Marvel fans are left to process the emotional toll of the nine-episode series and while some are disappointed their theories did not pan out, the mid and post-credit scenes had only inspired new theories. Marvel‘s first Disney + exclusive series has been a wild ride ever since the trailer first dropped.

Related:The MCU Comes to TV: A Complete Guide to ‘WandaVision’

The final episode included an action-packed magical showdown between Wanda (Elizabeth Olsen) and Agatha (Kathryn Hahn) as everything that had been building slowly finally came to a head. Wanda was a quick study and after mastering the runes that Agatha showed her, she finally took on the mantle of the Scarlett Witch.

While many answers were given there were others raised that still need answers. The biggest being what happened to Billy and Tommy, Wanda and Vision’s superpowered twin sons. They are certainly not gone forever since Marvel‘s post Endgame storyline is slowly building to the Young Avengers, most of which will be set up in its line of Disney+ series.

After Wanda defeated Agatha she was able to move to the final stage of grief, acceptance. The whole show has been about the process of grieving, which in the words of Vision (Paul Bettany) “what is grief but love preserving”. The “Hex” that allowed her family to exist comes down and while we are not shown the tear-jerking moment (thank the Lord because I would still be sobbing), Wanda’s family fades away with her spell then she leaves Westview alone.

While Wanda has been officially retconned as a witch in the Marvel Cinematic Universe and a powerful one at that. What she unleashed by accepting her magical abilities will most likely be the catalyst for the events in the upcoming Marvel movie Doctor Strange in the Multiverse of Madness.

We know that Wanda will be joining the Sorcerer Supreme in the film and with the post-credit scene in “The Series Finale,” Marvel fans and theorists finally have their best hint yet at what the driving force will be.

The scene opens on a remote mountain location which may or may not be a reference to Wanda Maximoff’s home from her comic book origin, Wundagore Mountain. Wanda at first seems to be at peace, alone in her isolation.

However, as it continues audiences see that Wanda is studying the Darkhold (retconned from Agents of SHIELD) in her astral form in an image clearly hinting towards Doctor Strange (Benedict Cumberbatch) doing the same thing in Doctor Strange.

In the last moments of the scene, Billy (Julian Hilliard) and Tommy (Jett Klyne) can be heard calling out to their mother for help. The question now becomes are the boys still alive and if so how and where could they be?

How Billy and Tommy Survived

One of the things that WandaVision took great pains to establish was that Wanda cannot create something from nothing. She can rewrite reality and shape it how she desires. The Vision that was inside the “Hex” with her was created from the piece of the Mind Stone that lived inside her.

If that is true then where did Billy and Tommy come from? One theory is that she pulled them into her classic television sitcom from another reality. While that theory is similar to the one surrounding Evan Peter’s return as Quicksilver/ Pietro Maximoff, it would explain where they came from. His introduction could have been a red herring meant to distract from the proof of the multiverse hidden in plain sight.

If Billy and Tommy came from another reality it is possible that when Wanda let go of her spell they would have returned to their world. In the comic books, even after Billy and Tommy disappeared they still existed in another form and were reincarnated as Wiccan and Speed.

Where Are Billy And Tommy Now

If Billy and Tommy were erased from existence in the main reality of the Marvel Cinematic Universe that does not mean they are gone forever. Rumors have already begun circulating online that they will join their mother in Doctor Strange 2.

Perhaps, after studying the Darkhold Wanda unlocked a portal to wherever Billy and Tommy ended up. One possibility was it was the Dream Dimension, which is ruled by the villain Nightmare, who is rumored to be one of the dark forces at play in the Doctor Strange sequel.

The Dream Dimension is the collective subconscious of humanity, and it can be accessed through the astral plane. That is where Wanda was during the post-credit scene. In the Dream Dimension, the limits on Wanda’s ability to create something from nothing would cease to exist.

Mephisto Has Billy and Tommy

Everyone following the theories on WandaVision has heard the name Mephisto time and time again. And while Marvel’s version of the devil never ended up making an appearance in the series, his name is not going away any time soon.

In the comics, Mephisto is directly involved with Billy and Tommy. After Wanda learns they never existed and her subsequent breakdown, Billy and Tommy vanish as they did at the end of WandaVision. It is later revealed that they were actually fragments of Mephisto’s soul.

Mephisto is also known for making deals. Perhaps he is luring Wanda to him with the sounds of her sons’ voices. Wanda might not be able to make Billy and Tommy real on her own and she could make a deal with the devil to get what she wants and the unintended consequences could unravel the multiverse and start Doctor Strange in the Multiverse Madness.

For now, fans can sit back and enjoy the next chapter of the Marvel Cinematic Universe: Falcon and the Winter Soldier premiering March 19th.

Tell us below how you are dealing with the finale episode of WandaVision and where you think Billy and Tommy will show up again first.