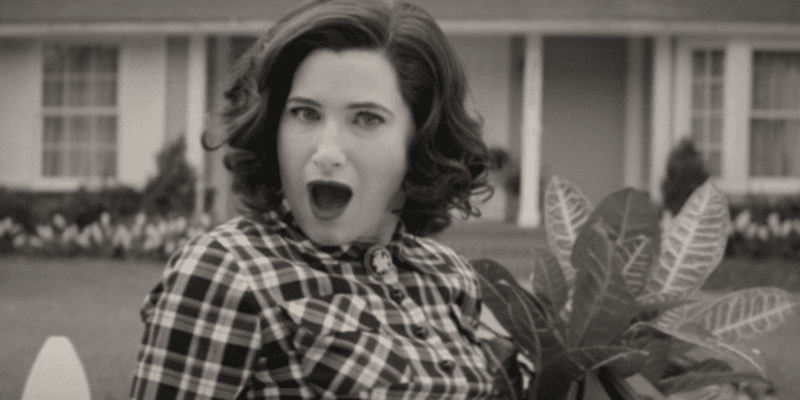 The new WandaVision song “Agatha All Along” is a Billboard and iTunes hit that features a hidden meaning that connects each tune through the series.

Every Marvel fan is in for a treat with each new WandaVision episode. Without a doubt, one of the biggest surprises in the hit Disney+ series is Kathryn Hahn’s character, Agatha Harkness. The character has seen a great deal of screen time, and now, the music charts, with “Agatha All Along.” In fact, the earworm has just become a Billboard charts hit.

In episode seven of WandaVision, rightfully titled “Breaking the Fourth Wall,” Kathryn Hahn’s mysterious nosy neighbor character finally revealed herself as Agatha Harkness, a chief villain from Marvel Comics. In the episode, Elizabeth Olsen’s Scarlet Witch/Wanda Maximoff unknowingly walks into a trap as her “caring” neighbor, Agnes, brings the distraught character into her Victorian-era home. Finally catching her prey in a trap, Agnes lures Wanda into her bewitched basement and reveals her real identity in true Disney fashion — through song, of course!

Viewers were not expecting a 2-minute, earworm song explaining “who’s been messing up everything.” WandaVision‘s Robert and Kristen Anderson-Lopez — the husband and wife power duo behind Frozen’s Let It Go, and Coco’s Remember Me — really hit it out of the park with this tune.

What makes the song gold is that Kathryn Hahn sings lead vocals on the track, capitalizing on the fact that she’s been the real director behind WandaVision this whole time.

Watch the original version of the song below.

The song topped the iTunes soundtrack chart list upon its initial release, and now Billboard has certified the tune as a “chart hit.”

The tune, which plays at the end of the show’s seventh episode, “Breaking the Fourth Wall,” debuts at No. 36 on the Digital Song Sales survey (dated March 6) with 3,000 downloads sold in the tracking week ending Feb. 25, according to MRC Data. It also tallied 1.6 million U.S. streams in that span. The song was released Feb. 23 on the WandaVision: Episode 7 original soundtrack.

This is a first for the Marvel Cinematic Universe, as the series nailed creating multiple tunes inspired by classic sitcom tv shows like The Brady Bunch.

Just like TripleDent Gum from Inside Out, people haven’t been able to get this catchy jingle out of their heads. YouTube videos featuring the instant classic are reaching millions of views, with thousands of happy comments surrounding the song, unlike Let It Go (which, to some — namely the parents of toddler girls — got very old very fast).

Agatha All Along quickly dominating the music charts is fascinating alone, but there’s something deeper hidden in the truly mind-blowing song.

YouTuber Artsy Omni pointed out that there is a hidden motif in each WandaVision theme. According to Oxford Languages, a motif in music is “a short succession of notes producing a single impression; a brief melodic or rhythmic formula out of which longer passages are developed.” A motif is essentially the “riff” in a song that’s repeated and can produce other narrative aspects.

Each WandaVision song throughout the series is centered around two La’s, a Mi sharp and a Mi flat, but the chord’s placement varies throughout each song. Robert and Kristen Anderson-Lopez connected every song in WandaVision by forming longer passages later expanded out of the simple chord progression.

Agatha All Along follows the same chord structure as the first WandaVision them but is shifted down by three keys. Much like each character in the classic sitcom series, they’re all connected one way or another to form a larger story.

Kristen herself even confirmed that this wasn’t the first time WandaVision fans heard the song. She wrote:

If you are wondering why you were so ready for the last song, it’s because, you were hearing the same song week after week.

If you are wondering why you were so ready for the last song, it’s because, you were hearing the same song week after week. https://t.co/Mj7Dguy4le via @YouTube #WandaVision #AgathaAllAlong #Itwasintervalallalong

Now, with Paul Bettany’s Vision, Monica Rambeau, Darcy Lewis, FBI Agent Jimmy Woo, and Evan Peters’s Pietro Maximoff/Quicksilver ramping up for the series finale this Friday, Marvel fans are hoping that the hit series can put a perfect ribbon on top of this Marvel present.

While it’s unclear who’s expected to show up for the finale (Doctor Strange?!), it’s safe to bet there’ll be another song that follows this hidden motif and won’t leave your head anytime soon. Catch the season finale this Friday on Disney plus!

Did you know this about WandaVision? Let us know in the comments below!