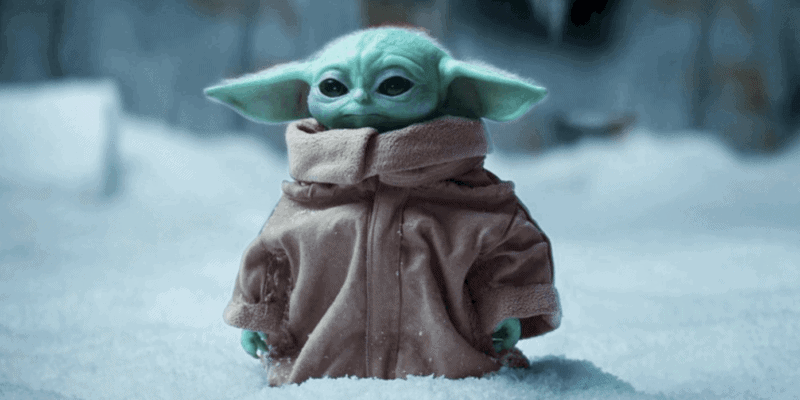 There are few more recognizable characters in modern American popular culture than The Mandalorian’s Baby Yoda.

Thanks to Ahsoka Tano’s (Rosario Dawson) live-action debut in The Mandalorian Season 2, we now know the tiny, 50-year-old foundling’s real name is Grogu, but that hasn’t stopped the masses from calling him by his more well-known moniker. Hey, even Mandalorian creator Jon Favreau says it’s okay.

Now, the adorable Star Wars character — who has already been made into an augmented reality character and appeared on everything from cereal boxes to ugly Christmas sweaters — is the subject of some incredibly impressive snow art in the state of Indiana.

The Snow Artist shared photos (and even a 360-degree video) of his impressive Baby Yoda 3D artwork on Facebook. He wrote:

TA-DA!!!
Grogu!!
Also known as The Child and Baby Yoda from The Mandalorian TV series!
I was out of ideas so I ask YOU for suggestions and several people suggested Baby Yoda-THANK YOU!!!!!
It took 7 hours to create this little guy.
I almost didn’t get to complete this sculpture because the day that I began the temperature got up to 36 degrees and the snow was melting but later that day the temp dropped to 32 and I was able to complete it.
Enjoy!!

TA-DA!!!???Grogu!!Also known as The Child and Baby Yoda from The Mandalorian TV series!I was out of ideas so I ask…

The Baby Yoda snow sculpture — which was crafted in Greenfield, Indiana — has gone viral, with over 35,000 likes and over 18,000 shares. The artist has been blown away by the success of the piece. He posted these thoughts in the comments of his original post:

WOW!!!!
I’m blown away guys!
15 MILLION PEOPLE have seen my sculpture!
This thing has Snowballed
This is just amazing!!!!
Thank you ALL for your support!
I never expected ANYTHING like this- I figured maybe 50,000 tops so I’m smiling ear to ear!!!

In another post, The Snow Artist shared the immense amount of work that goes into preparing for his annual designs.

It’s not as simple as it would seem-a lot of planning went into this design. It all starts before any Snow falls.
In the Fall around early December I mow my lawn one last time shorter than usual so the Grass blades won’t be sticking up through the snow- I want a smooth white surface around my sculptures. Then I get out my leaf blower and get rid of all the leaves in the yard so the snow will be free of leaves when I use it to build with. So Grogu first became an idea when on December 15, 2020 I posted that I needed some ideas for my next sculpture because the ideas that I had were not very good.

Local Indianapolis ABC News affiliate WRTV shared the following details about the icy Mandalorian tribute — I mean, really, we might as well be back on Maldo Kreis with the krykna:

The return of snowfall last weekend in Central Indiana meant the return of the Snow Artist.

Rick Horton’s latest frosty creation outside his Greenfield home is Baby Yoda from “The Mandalorian.”

Horton has created many snow sculptures over the past 20 years, such as bald eagles, a UFO and Minions from the “Despicable Me” movies.

He said he had run out of ideas, so he took requests from the public and they suggested “The Child” from the Disney+ series.

The cold definitely bothers me, but we think Elsa would absolutely love to try her hand at building a Grogu next time her ice powers get a little out of control.

What’s next for the actual Baby Yoda?

As for Grogu’s next appearance in The Mandalorian saga, nobody knows where he’ll end up next — except for Jon Favreau and Dave Filoni.

When we last saw bounty hunter Din Djarin (Pedro Pascal) and his “son,” they were saying a tearful goodbye to one another before Grogu left to complete his Jedi training with none other than Luke Skywalker (CGI Mark Hamill) who is traversing the galaxy before constructing his new Jedi Temple.

Djarin — who has now earned the ire of Bo-Katan Kryze (Katee Sackhoff) after becoming the de facto rule of Mandalore after by winning the Darksaber in battle with Moff Gideon (Giancarlo Esposito) — promised Grogu he would see him again, but we don’t know exactly what that looks like.

The Mandalorian has three confirmed Disney+ spinoff series — Ahsoka, Rangers of the New Republic, and The Book of Boba Fett. There are also rumors of a Luke Skywalker spinoff that could introduce Star Wars Legends’ character, Mara Jade, into the canonical Star Wars universe for the first time.

To sum it up, Star Wars fan community: Round and round and round we go, where we’ll stop nobody knows. That is, at least until The Mandalorian Season 3 premieres sometime in 2022.

What do you think about this crazy Grogu snow art? Where do you think we’ll see the tiny Jedi again in The Mandalorian universe?