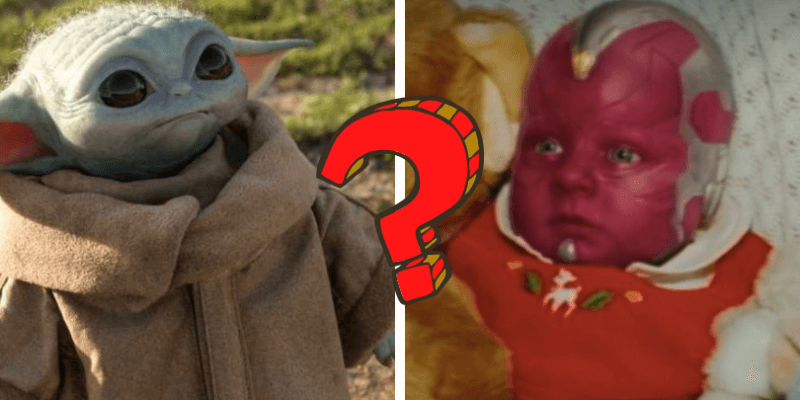 Marvel fans around the world have been buzzing about WandaVision. The amazing cameos, the twist endings, the insane tone shifts — this show has it all. Now, WandaVision fans have a new reason to get excited: Baby Vision is now an internet sensation. In episode 5 of WandaVision, the opening sitcom theme included photos of its main characters growing up, as many 80s sitcoms do. This show employs so many ‘Easter eggs’, it’s difficult (but fun) to try and keep up! During the montage, we received Marvel fan gold: Baby Vision. Fans took to Twitter to express their love for the tiny superhero – and suggest a competition that Star Wars fans may find intriguing.

Since Disney+ brings fans incredible fandom content into fans’ homes, we all have grown attached to the Marvel and Star Wars characters the streaming service has created or expanded upon. It’s only logical that viewers would connect the brand new Baby Vision character to The Mandalorian darling, Baby Yoda (AKA Grogu). Just look at some of the tweets fans shared on Twitter after episode 5 of WandaVision, which featured the debut of Baby Vision.

#Marvel was like: I’ll see your #BabyYoda and raise you a #BabyVision

#StarWars we got #BabyYoda #MCU : We got #BabyVision #WandaVision #DisneyPlus pic.twitter.com/HOJxV5FUFe

With these fan reactions, it’s hard not to wonder who would win in an ultimate battle of cuteness: Baby Vision vs. Baby Yoda. But, how do we stage this battle? Is it based on cuteness? Deadliness? Cute deadliness? Let’s ponder this debate. But remember, we’re all winners because we live in a world with both Baby Vision and Baby Yoda.

Note: No Baby Visions or Baby Yodas were harmed in the making of this hypothetical battle.

Baby Vision vs. Baby Yoda: A Battle of Cuteness

In a showdown based completely on cuteness, this is a difficult decision. Baby Yoda definitely has more screen time in which he can win our hearts. However, Baby Vision made an impression on viewers by only a small montage of his cuteness. While Baby Vision certainly has not eaten anyone’s endangered eggs, he also has not had a life beyond the frame of the “Hex” alternate reality. That may loose this little guy some points. Vision, of course, has more story to endear him to our hearts. But, Baby Vision is quite detached from any story (since we know Vision was never actually a baby).

Yet, I do not believe this lack of story attachment has any effect on his cuteness level. If we break this down, Baby Yoda has big eyes to gaze lovingly with, while Baby Vision has a beautiful skin tone that is just inhuman. Baby Vision’s fashion sense is charmingly retro, while Baby Yoda’s fashion sense focuses on comfort and utility. Then, of course, there’s the big, pointy ears vs. no ears debate that Baby Vision simply would not hear of.

But, cuteness is only half this battle. The other half is much more ability-based, so we may see a different winner.

Baby Vision vs. Baby Yoda: A Battle of Powers

When it comes to a battle of pure power, the challenge gets a bit more complicated. While Baby Yoda has the potential to become a powerful Jedi (or Sith Lord), Baby Vision’s power level is undefined. Baby Vision would likely have the same powers of grown Vision. A “synthezoid” would not age; it would simply be, even if his body were updated over time. Yes, Vision could receive software updates and changes, but hear me out. Since Baby Vision does not actually exist outside of the “Hex” dimension, we cannot know his powers. However, we can assume that the rules would be the same for Baby Vision as they are for the real Vision. Vision is an android created by human invention, rather than an aging organic being.

With all this being said, in their current hypothesized states of power, I think Baby Vision would win a physical battle. Of course, I would like to think that the physical round of battle would never happen. Imagine: Baby Yoda and Baby Vision cross into the same universe. First of all, we would have to implement safety measures to ensure the world did not explode from the cuteness overload. Secondly, I think if these adorable monoliths of fandom met, I like to think they would be best buddies instead of mortal enemies.

Therefore, Baby Vision technically wins this portion of the battle, but let’s hope we never have to worry about jealousy between the two sweet superbabies.

The Result of the Showdown

I think these two tie in this battle currently. However, if I had to choose a winner overall, I think Baby Yoda is the current tie-breaking champion simply due to our longer friendship with Grogu. While we know adult Vision quite well, we only met Baby Vision recently. Hopefully, he will grace us with his presence again. Until then, let’s hope he is content with Grogu holding on to the cuteness throne. If he isn’t, let’s hope Wanda doesn’t find out and expand the “Hex” into the Star Wars universe. Or – maybe we should hope she does. How amazing would that multiverse be?

Related: Holland Talks ‘Spider-Man 3’, Calls It The “Most Ambitious Superhero Movie Ever Made”

Who do you think wins the Baby Vision vs. Baby Yoda showdown? Let us know in the comments!

Comments Off on Baby Vision vs. Baby Yoda: A Battle of Adorable Proportions