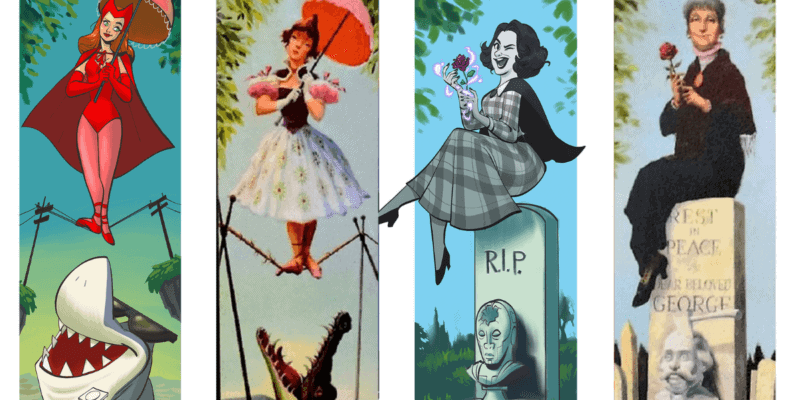 If you like WandaVision and Disney’s The Haunted Mansion, you’ve got to see the fabulous art collection known as “Wanda Mansion”.

These prints from artist Brian Kesinger are simply fabulous and a must-have for any Marvel and Disney fanatic. Additionally, signed prints of the artwork are available to buy on Brian’s website right now!

For those unaware, these images are a recreation of the iconic art from The Haunted Mansion ride at several Disney theme parks. As Guests descend into the depth of the mansion, these seemingly pleasant images reveal a frightening lower half. The portraits slowly stretch and become more and more disturbing (and also a little hilarious!).

Brian has done a fantastic job reconstructing the stretching portraits using some of WandaVision‘s most iconic characters to create new art. Notably, we can see Wanda / Scarlet Witch standing above the animated Shark from the sixth episode of the series, which is a recreation of the image of a lady standing over the crocodile from Haunted Mansion.

Indeed, if you’re interested in both WandaVision and The Haunted Mansion, you’ve got to grab yourself one of these! The set of four costs $75, while individual prints start at $20. Full payment and shipping information can be found on Brian’s website.

If you don’t want to buy all four of them together, as we mentioned earlier, Brian sells each image as its own print. Don’t miss out on hanging this fantastic art in your home if you’re a big fan of both Disney parks and the MCU.

Furthermore, the attention to detail on each portrait is just fantastic. We particularly love the work on the fourth picture, which sees Jimmy Woo (Randall Park), Darcy Lewis (Kat Dennings), and Monica Rambeau (Teyonah Parris) recreate yet another iconic Haunted Mansion pose.

WandaVision may be over, but with Brian’s help, you can bring a bit of Westview home with you. Furthermore, if you’re itching to ride Walt Disney World‘s spookiest attraction, but can’t because of travel restrictions, at least you can take Haunted Mansion home with this beautiful bit of art!

What is The Haunted Mansion?

Any Disney fan can tell you what an iconic attraction The Haunted Mansion is. The ride is present at several of the Disney Parks around the world in some form or another. It has a deep lore about a tragic incident and a pair of star-crossed lovers who meet a grisly fate. However, the ride is actually absent in one park: Shanghai Disneyland. This is due to cultural differences in the way ghosts, the afterlife, and other important thematic elements are looked at in China.

The ride is present in other Disney Parks including Disneyland, Walt Disney World, Hong Kong Disneyland, and Tokyo Disneyland. Disneyland Paris also has a version of the ride named Phantom Manor, though it essentially serves as the same ride.

The attraction starts out as one of the darkest Disney rides out there. You board a Doom Buggy which takes you around a ghostly mansion filled with frightening imagery and terrifying specters. However, at about the half-way mark, things turn from spooky to hilarious as you descend into a full on ghost party! Disney’s The Haunted Mansion has remained a fan favorite for several years and the ride’s iconography as become as iconic as Johnny Depp’s Captain Jack Sparrow.

The main attraction has become so popular, that characters like Madame Leota, Hatbox Ghost, and the hitchhiking ghosts have even got their own merchandise, including Funko pops! It’s no surprise that Brian chose this ride as the inspiration for the “Wanda Mansion” collection.

The WandaVision finale took fans on a wild ride

Elizabeth Olsen and Paul Bettany took comic book fans on a journey across the season of WandaVision. The ninth episode saw all the secrets revealed, as Olsen’s Wanda Maximoff finally transformed into the Scarlet Witch, for the first time. Brian’s art reflects Wanda’s new digs as the Scarlet Witch, as well as the Shark (now obviously a metaphor for Agatha’s manipulation).

Additionally, Paul Bettany’s Vision sadly died, as he was erased from existence. Fortunately for Marvel fans, White Vision is still out there and alive, so we haven’t seen the last of him yet! Sadly, fans got a little too carried away with theorizing and many were disappointed to see that characters like Doctor Strange never turned up.

However, we know that Olsen will return in Doctor Strange in the Multiverse of Madness. Furthermore, Teyonah Parris will return in Captain Marvel 2, likewise with Randall Park in Ant-Man and the Wasp: Quantumania, and Kat Dennings in Thor: Love and Thunder.

Hopefully, we’ll see a series that’s just as epic when Sam Wilson journeys to become the new Captain America in The Falcon and the Winter Soldier. As the Marvel Universe continues to expand, you can be sure that fans like Brian will create awesome new art that celebrates it.