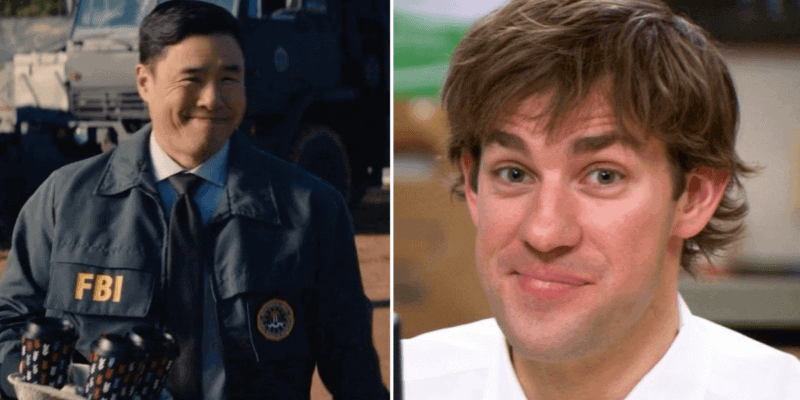 The Office fans were in for a treat with last week’s WandaVision episode, in which nearly all the characters broke the “fourth wall,” just like Jim Halpert from The Office or Ben Wyatt from Parks and Recreation. Marvel’s first streaming series on Disney+ has taken the world by storm, with Elizabeth Olsen’s Scarlet Witch and Paul Bettany’s Vision constantly amazing their viewers. One character, however, has stolen the hearts of any Marvel fan with his hilarious spirit and magic card tricks: FBI Agent Jimmy Woo (Randall Park).

New rumors suggest there could be a collision of Jim Halperts from The Office with one special actor’s inclusion.

Recent rumors around WandaVision suggest that Monica Rambeau’s aerospace engineer contact could be the Fantastic Four‘s Reed Richards, and fans are calling for actor John Krasinski to take the helm.

Krasinski has an impressive library of Hollywood hits. Still, he’s best known for his portrayal of master prankster Jim Halpert on NBC’s The Office; a smash hit series that arguably revolutionized TV sitcoms. Krasinski, director of A Quiet Place (2018) and creator of the popular Some Good News on YouTube, previously tossed his hat in the Disney ring when voicing Frank McCay in Pixar’s Monsters University (2013).

Much like other fan theories — like Rosario Dawson being the perfect actress for a live-action Ashoka Tano — nearly every Marvel fan has dreamt of casting John Krasinski and his wife, Emily Blunt — another successful actor and Disney’s Mary Poppins in Mary Poppins Returns (2018) — as Reed Richards and Susan Storm in the upcoming Fantastic Four film.

In episode seven of WandaVision, rightly titled Breaking the Fourth Wall, fans were blown away by Monica Rambeau’s character transformation into a superhero, much like Marvel comics foretold. On top of that, Kat Dennings’s Darcy Lewis officially met a perplexed Vision and caught the ex-Avenger up to date on current events. However, no moment could surpass the official introduction of Kathryn Hahn’s character: Agatha Harkness.

Agatha All Along has been stuck in my head since Friday, but I’m not complaining. Agnes’s slow burn into Agatha Harkness was so well executed, with numerous Easter eggs and subtle plot points. This character’s inclusion shows Marvel’s intricate planning — and proves that Kevin Feige & Co.’s attention to detail is nearly unrivaled.

Peters’s introduction into the MCU confirmed that Disney and Marvel Studios are ready to welcome Marvel entities from 20th Century Studios library, including the Fantastic Four.

If fan service can convince The Mandalorian to include actress Rosario Dawson as Ashoka Tano, there’s a healthy chance we could see John Krasinski as Mister Fantastic, and even Emily Blunt as Invisible Woman, in the MCU.

WandaVision would be the perfect opportunity to introduce the Fantastic Four into the Marvel Cinematic Universe. Agatha Harkness, Wanda Maximoff, and Monica Rambeau are likely to finish the season battling it out with their cosmic powers, so John Krasinski as Reed Richards could join WandaVision and fulfill Paul Bettany’s promise of an astounding cameo that’s yet to come.

It is worth noting, of course, that Doctor Strange (Benedict Cumberbatch) has yet to appear in the series and could also be a notable cameo.

If Krasinski shows up, though, it would mean there are two Jim Halperts in the Marvel Cinematic Universe.

One of The Office‘s best cold opens included Marvel’s Randall Park posing as Jim Halpert in Dunder Mifflin’s Scranton branch to throw off assistant (to the) regional manager Dwight Schrute (Rainn Wilson). Randall’s performance was spot on in his Office cameo, and any fan of the classic sitcom series constantly refers to Park’s FBI Agent Jimmy Woo as “Jim”.

While it could be pipe dream to see Krasinki take-on a Fantastic Four role and share the screen with Randall Park again, we could theoretically see this The Office reunion soon!

Do you think John Krasinski will join the MCU? Let us know in the comments below!