'WandaVision' to Receive 'Mandalorian'-Style Documentary - Inside the Magic 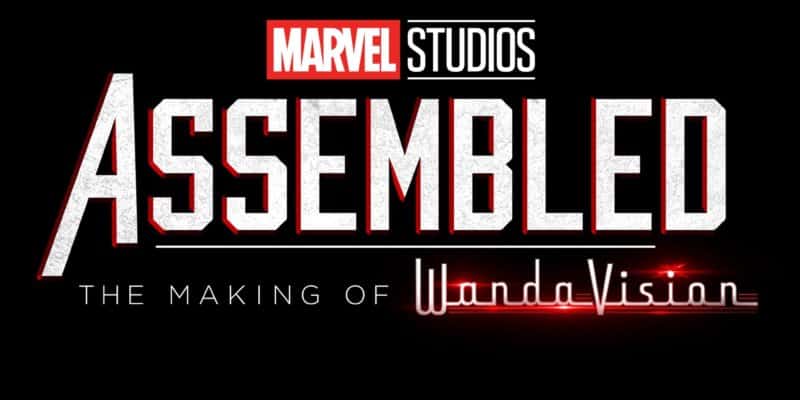 Marvel’s hit series WandaVision will have a behind-the-scenes documentary debuting on Disney+ this March! If you cannot get enough of WandaVision, this is great news as there will be even more to watch once the series airs its last episode.

Much like the Disney Gallery: Star Wars: The Mandalorian, which offered an in-depth behind-the-scenes look at the hit Disney+ series, The Mandalorian, WandaVision is set to get the same treatment!

Marvel’s ASSEMBLED will feature special looks into many Marvel movies and series, starting with the making of WandaVision just one week after the series last episode of its first season.

@MarvelStudios‘ ASSEMBLED, a new documentary series of specials, goes behind the scenes of the series and movies of the MCU. The first special, ASSEMBLED: The Making of #WandaVision, is streaming March 12 on #DisneyPlus.

.@MarvelStudios' ASSEMBLED, a new documentary series of specials, goes behind the scenes of the series and movies of the MCU. The first special, ASSEMBLED: The Making of #WandaVision, is streaming March 12 on #DisneyPlus. pic.twitter.com/iLX2cPdMcZ

This is going to be interesting as the series takes viewers through multiple decades of iconic television. It will be fun for fans of WandaVision to see how Marvel was able to pull this off so seamlessly, while also integrating a mysterious storyline!

Marvel gave us some additional details on the upcoming series, ASSEMBLED, sharing that upcoming episodes released will highlight different Marvel series and MCU films — it will also feature some of our favorite stars such as Scarlett Johansson (Wanda Maximoff, Scarlet Witch) and Jeremy Renner (Hawkeye).

ASSEMBLED will take viewers through productions such as WandaVision, The Falcon and The Winter Soldier, and Loki via exclusive on-set footage. Join filmmakers and stars like Scarlett Johansson and Jeremy Renner as they detail the genesis of the Black Widow film, and the Hawkeye series.

Arriving on the streaming service shortly after theatrical releases and series completions, ASSEMBLED is an immersive, and in-depth examination of the next phase of the Marvel Cinematic Universe, and will arrive soon on Disney+

The first episode of ASSEMBLED will focus on the critically acclaimed WandaVision. Join Elizabeth Olsen, Paul Bettany and WandaVision’s creative team as the episode pulls back the curtain on this highly groundbreaking series. Learn how the production’s surprising concept took shape by drawing inspiration from classic sitcoms. Witness how the crew went to great lengths to emulate various filmmaking methods used during the early years of television. Discover the unique challenges and ultimate rewards of performing an entire episode in front of a live studio audience. Spend time with exciting newcomers to the MCU, such as Teyonah Parris and Kathryn Hahn, along with returning favorites like Kat Dennings and Randall Park.

WandaVision only has three episodes left of its first season! Here are some details from Marvel to help catch you up on the series if you haven’t started watching yet:

Starring Elizabeth Olsen and Paul Bettany, WandaVision marks the first series from Marvel Studios streaming exclusively on Disney+. The series is a blend of classic television and the Marvel Cinematic Universe, and joining Olsen and Bettany are Kat Dennings, who reprises her role as Darcy Lewis from Marvel Studios’ Thor and Thor: The Dark World; Randall Park, who reprises his role as Agent Jimmy Woo from Ant-Man and The Wasp; and newcomers Kathryn Hahn, who plays their plucky neighbor, and Teyonah Parris, who plays the adult Monica Rambeau, who was first introduced in Captain Marvel.

We cannot wait to see this documentary and all the secret gears that helped make WandaVision tick!

Will you be watching Marvel Studio’s Assembled? Let us know in the comments!

Comments Off on ‘WandaVision’ to Receive ‘Mandalorian’-Style Documentary