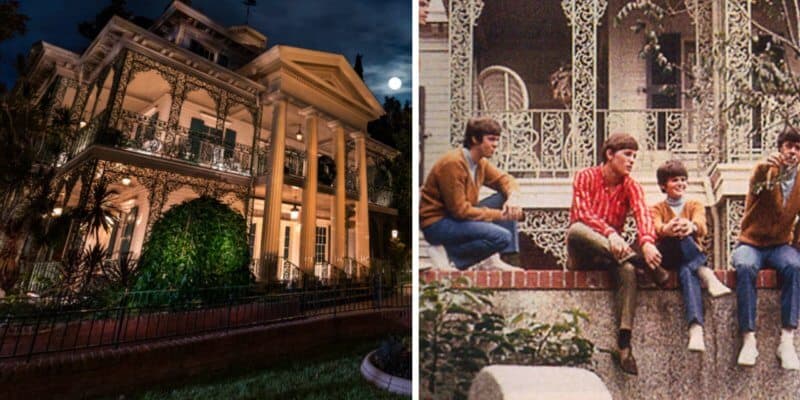 Finding out about hidden rooms all over the Disney Parks is always exciting for Disney fans — it lets us know that there is always so much more to explore, even if we may never get the chance to. Now, it seems like the spookiest attraction of all, Disneyland’s Haunted Mansion, has a fully furnished secret room that was used on the second floor of the attraction.

Former teen idol Donny Osmond used to perform alongside his brothers as The Osmonds, and their rise to fame got them an insider ticket for a Disneyland special. In 1970 the Osmond Brothers participated in The Magical World of Disney alongside E.J. Peaker and Kurt Russell for a Halloween special that was highlighting Disneyland’s new attraction at the time, Haunted Mansion.

According to IMDB, the plot of the special went as follows:

The Osmond Brothers, accompanied by Kurt Russell and E.J. Peaker, come to Disneyland to perform at a show being held there. But Donny and Jay Osmond go off to explore the park. Worried that they will miss the performance, the rest of the cast go to try and retrieve them before it is too late. They also visit the then-newest Disneyland attraction at the time, the Haunted Mansion.

Now while Osmond was hanging out at Disneyland for a full week filming, he was also a regular kid who needed to take classes and undergo schooling. Like most kids who work on film and television sets, homeschooling or tutoring is always required for a certain amount of hours each day — but where do you find a classroom at Disneyland?

Donny Osmond took to Instagram for a throwback of him and his brothers from that Disney special and told his fans exactly where the singing sensation attended school during his week in Disneyland, and it seems that his class was rather large — filled with 999 other happy haunts!

Even though Disneyland is closed right now due to COVID-19, I remember back to this week in 1970 when my brothers and I filmed “The Wonderful World of Disney – The Haunted Mansion” with the talented @official._.kurtrussell and E.J. Peaker in the Magic Kingdom.

All of us got to spend the entire day at Disneyland.

I was only 12 years old at the time and obviously still in school. There was a room on the second floor of The Haunted Mansion in a small corner that was not being used for the ride. That was where I had school with my teacher during filming.

I’m pretty sure that I’m the only person that can claim that The Haunted Mansion was my schoolhouse, and that’s why it is still my favorite ride in The Magic Kingdom.

Hopefully it will be safe for Disneyland and other entertainment venues to open soon.

What are your favorite rides at Disneyland or Disney World? #ThrowbackThursday

Although it seems Osmond made a few mix-ups calling Disneyland, Magic Kingdom (it’s okay; people do it all the time, as Disneyland is Walt’s original Magic Kingdom) — one thing is certain — Osmond just confirmed there is a secret second-floor room in Disneyland’s Haunted Mansion! If Osmond, who was 12 years old at the time, was allowed into this room for schooling, that means the room must have been in good enough condition for Disney to allow a child pop star to use.

From Osmond’s description, it seems that this room must have been just off one of the show scenes of Disneyland’s Haunted Mansion, considering it was a room not being used for the ride — and one that must have its own private entrance if Osmond was able to enter and exit without disrupting Guests.

What is in that room you ask? It looks like we are going to have to hope that the actor goes more in-depth about his “Disneyland High” experience once again because this room seems to be quite secretive with no information about it online. Walt often created spaces that he could use as an escape — and this room in the Haunted Mansion likely was one of them. Club 33, the firehouse apartment on Main Street U.S.A., as well as the Disneyland Dream Suite, were all created so that Walt would have personal spaces in his theme park that he could use both personally and professionally — and now it seems we get to add another room to that list!

If you want to check out The Osmonds 1970 TV special The Magical World of Disney, you can watch it below!

Most recently, Disneyland’s Haunted Mansion underwent a refurbishment, and now that Disneyland is finally open, Guests can once again ride the attraction!

Upon your return to the Haunted Mansion at Disneyland park, you may discover the ghosts have been busy updating a few elements in and around the estate…

Outside, freshly landscaped details now adorn the site for dearly departed pets, representing their stories from beyond the grave.

If you want to check out a video on the new Haunted Mansion, take a look below… although it looks like Guests still will not be able to enter that secret room…

Did you know that Disneyland’s Haunted Mansion had a secret room in it? What other attractions do you think have secret rooms or areas Guests don’t typically get to explore?