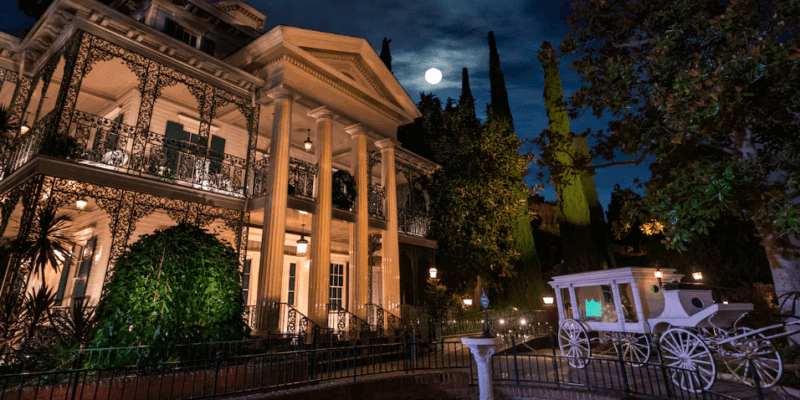 The Haunted Mansion hosts 999 happy haunts, and there’s always room for one more, 365 days a year…that is, unless Disneyland is closed or the ride is under refurbishment.

In 2020, we got a double whammy. Not only was it announced that the original Haunted Mansion attraction at Disneyland was closing for a lengthy refurbishment in 2020, but also ever Disney Park around the world unexpectedly closed this year, therefore prolonging the closure of this New Orleans Square staple.

Thankfully, there is hope for 2021, and we are eagerly awaiting Disneyland’s reopening. For now, here’s your guide to the Haunted Mansion and the renovations occurring at this famous attraction at the Happiest Place on Earth. We wanted to recap everything that has been announced about this refurbishment, in case you missed it.

There’s Always Room For One More

The Haunted Mansion is a fan-favorite attraction for Disney fans all over the world, and the original Disney Park hosts the oldest version of the ride. But with rich history comes age, so it’s no wonder the ride has to get a tune-up every now and then.

Below is the official description of the Haunted Mansion at Disneyland Park in California:

Creepy Fun for Little Ones
The Haunted Mansion is dark and contains some mildly frightening scenes, but there is no gore. The ghostly residents are friendly and the ride is slow-moving.

Every year for the holiday season — from the beginning of the Halloween season in September to after the new year begins in January — Haunted Mansion Holiday delights Guests with a festive overlay of The Nightmare Before Christmas. So, with this being our article all about the Haunted Mansion refurb, we had to mention Haunted Mansion Holiday, since, for many Disneyland Guests, this is the last version of the attraction that they experienced before the refurbishment began and the theme parks began their temporary closure in March.

Decked Out for the Hallow-Days
Pumpkin King Jack Skellington has been busy decorating the Haunted Mansion with frightfully festive touches inspired by Tim Burton’s The Nightmare Before Christmas.

Experience some of your favorite sights, special seasonal surprises—and scare-aracters from the movie. Sally, Oogie Boogie and other Nightmare nasties will be on hand to wish you “Season’s Screamings!”

Haunted Mansion Havoc: About the Refurbishment

It was announced over a year ago in early December 2019, that Disneyland’s Haunted Mansion would undergo a lengthy refurbishment throughout 2020. Just as soon as the holiday season ended and Haunted Mansion Holiday closed, the holiday decor was taken down and scrims were put up covering the facade of the Mansion attraction. January 20 was the last day Guests were able to ride the attraction.

According to a report by local Southern California news source the OC Register, the refurbishment of the Haunted Mansion was originally intended to last for approximately two months in 2020. At the time, it was reported that the ride would return later in spring “after the interiors and exteriors are refreshed and some attraction mechanics are refurbished, Disneyland officials said.”

The work will include paint and trim on the interior and exterior of the attraction along with lighting and mechanical work inside the ride building. The renovated ride will look refreshed, but no visual changes are expected to be made to the attraction.

However, because Disneyland Resort closed mid-March as a result of the ongoing pandemic, the closure of the Haunted Mansion was — let’s just say — extended. But, during the theme park closures, Disney has been hard at work on some major updates — including the Haunted Mansion! It is being widely noted that we can expect the Haunted Mansion refurbishment to be complete when Disneyland Park and Disney California Adventure Park reopen sometime in 2021.

Read More Magic: Disneyland Resort Made Some Major Updates During the Closure

We don’t yet know when we can take a ride in a doom buggy and pick up some hitchhiking ghosts again, but one thing’s for sure: we miss the Haunted Mansion so much, we may decide to move in when it finally reopens!

Want to book a Disneyland trip so you can ride the Haunted Mansion ASAP? Or want to head to Disney World to experience the Florida theme parks, since they are currently open? Click here!