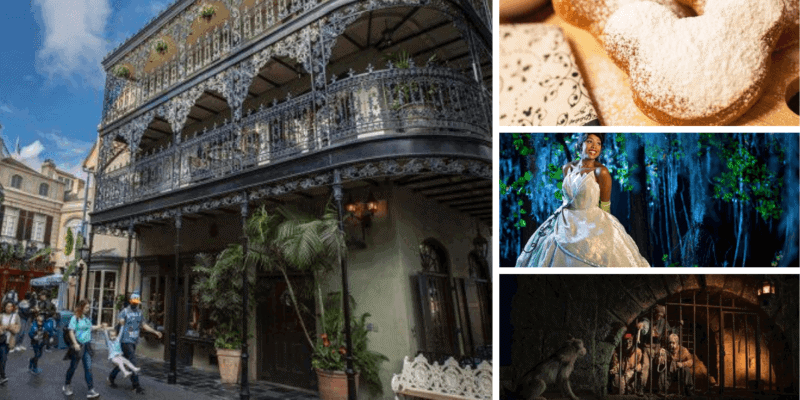 You can take a virtual tour around Disneyland, but for a deeper look into the parks history, we’ve created a guide to one of the most iconic and historic locations in all of Disneyland Resort. New Orleans Square is a highly unique and special location at the Happiest Place on Earth. It is home to some of the oldest attractions in the theme park (and since Disneyland is the first Disney Park, that means New Orleans Square is where you’ll find some of the oldest Disney Parks attractions in the world) and some of the best food in all of Disneyland Resort.

If you want to book a trip to Disneyland Resort, click here to reach out to the Authorized Disney Vacation Planners at Academy Travel.

What is New Orleans Square?

New Orleans Square is an area unique to Disneyland. Located in Disneyland park just past Adventureland, this themed land is home to several of Disneyland’s Guest-favorite attractions and dining locations. The area is themed after New Orleans and provides Guests with an immersive experience as they meander Royal Street and embrace scents of beignets and gumbo.

Related: Walk in Walt’s Shoes: How to Experience Disneyland Just as Walt Disney Would

Though the area has changed here and there, it largely remains the same as it did when it first opened in Disneyland over 50 years ago. It is still one of the most immersive lands in the Disney Parks due to the attention to detail and authenticity that Walt Disney Imagineering maintained from the beginning.

Below, an excerpt from Disneyland: Memories of a Lifetime provides some insight into the atmosphere of the land:

“Here is the Paris of the American frontier: the Crescent City of New Orleans as it was 150 years ago. Within its sheltered courtyards and winding streets, elegance and charm mingle comfortably with the irreverent sounds of Dixieland jazz. In this romantic yet adventurous setting guests are immersed in the sights and sounds of New Orleans of the late 1850s. The aromas of chicory and freshly baked fritters fill the air while the Louisiana state flag flies proudly overhead and hte billowing white sails of a mighty galleon can be seen in the distance beyond the city.”

Where to Find New Orleans Square in Disneyland

If you enter Disneyland park and walk down Main Street, U.S.A. to the Hub, veer left to walk through Adventureland. Meander through Adventureland past the Tropical Hideaway, Jungle Cruise, and Tarzan’s Treehouse. There, you will find Pirates of the Caribbean and the rest of New Orleans Square.

If you are walking through Frontierland, walk toward the Rivers of America. From there, you should see landmarks like Pirates of the Caribbean and Cafe Orleans, both located in New Orleans Square.

If you are coming from Star Wars: Galaxy’s Edge or Critter Country, turn right to walk toward Haunted Mansion. Once you see the Rivers of American on your left and Haunted Mansion on your right, you have made it to New Orleans Square.

There are three rides located in New Orleans Square at Disneyland: Pirates of the Caribbean, the Haunted Mansion, and the Disneyland Railroad. We have included the official descriptions of each ride, as well as where you can find them on the Disneyland park map.

If you take a look at the map above, you will see the Haunted Mansion on the left, the Disneyland Railroad station in the middle, and Pirates of the Caribbean on the right. Note that this is a bird’s eye view, so when you are walking on the path along the Rivers of America or meandering Royal Street in New Orleans Square, your perspective will be different.

The New Orleans Square train station is the second stop on the Disneyland Railroad’s grand circle tour of Disneyland park. In honor of the 60th anniversary, a very special feature was installed here. Disney Parks Blog shared, “The second stop on the Disneyland Railroad is home to the telegraph cable office, where a paraphrased portion of Walt Disney’s opening-day speech from July 17, 1955, can be heard in Morse code.”

Read More: The History of the Disneyland Railroad

There are many dining options in New Orleans Square. Below is a list of all of the dining locations in this land to give you an idea of what you will find. Keep in mind that this is the only area of Disneyland Resort where you will find the famous Mickey-shaped beignets (available at both the Mint Julep Bar and Cafe Orleans).

Embark on a culinary adventure with Cajun and Creole cuisine as you watch Pirates of the Caribbean boats glide past.

Known for: Being the restaurant “inside” the Pirates of the Caribbean attraction.

Known for: Offering Cajun cuisine in a sit-down setting with views of the Rivers of America. Also, the Monte Cristo sandwich and Pommes Frites!

Walt Disney used to enjoy a cup of coffee at New Orleans Square now and again. The historic photo above shows Walt inside Cafe Orleans with some Cast Members at the time.

That coffee machine is still at Cafe Orleans today! Take a closer look the next time you eat at the restaurant.

Sup on time-honored southern specialties, soups, salads and sandwiches in a lush garden that looks out on New Orleans Square.

Known for: Being a great place to pick up some seasonal goodies or delicious soup, salad, and sandwiches. Musicians also delight guests on the stage at this outdoor dining location from time to time.

While away a warm afternoon with a non-alcoholic mint julep in New Orleans Square. Fresh Mickey beignets and soft drinks are also served at this walk-up window within the garden patio of the French Market Restaurant.

Known for: Mickey beignets and mint juleps, a favorite snack combination for Disneyland fans of all ages.

You’ve got it made in the shade with a scrumptious sourdough bowl of clam chowder, steak gumbo or vegetarian gumbo. Sit on the patio under a beautiful wrought-iron balcony and enjoy fritters and fountain beverages.

Known for: Gumbo and fritters — pick some up after your mint julep!

Shopping and Other Attractions in New Orleans Square at Disneyland

Below is a list of the retail locations in New Orleans Square:

Note that these musicians’ performances are not listed on the Disneyland Resort official website or in the Disneyland App, so we recommend asking a Cast Member nearby for information about when you can expect performances. The Bootstrappers are our favorite pirate band — they often perform on the weekdays!

Want to hear some atmospheric New Orleans Square music in the meantime, if you can’t make it to the parks anytime soon? Listen below!

You can often spot the following characters in New Orleans Square:

Related: Splash Mountain to Be Rethemed to ‘Princess and the Frog’!

The famous Club 33 is also located in New Orleans Square. Club 33 is a highly exclusive and desired club within the Disney Company and fandom. To be able to be a Club 33 member or be a Guest of the historic Club 33 at Disneyland is a bucket list item for so many Disney fans. Click here to read more about Club 33. And if you don’t mind spoilers, watch the video below!

If you want to visit the Happiest Place on Earth so you can meander through the historic New Orleans Square at Disneyland, click here to book a trip with the Authorized Disney Vacation Planners at Academy Travel!