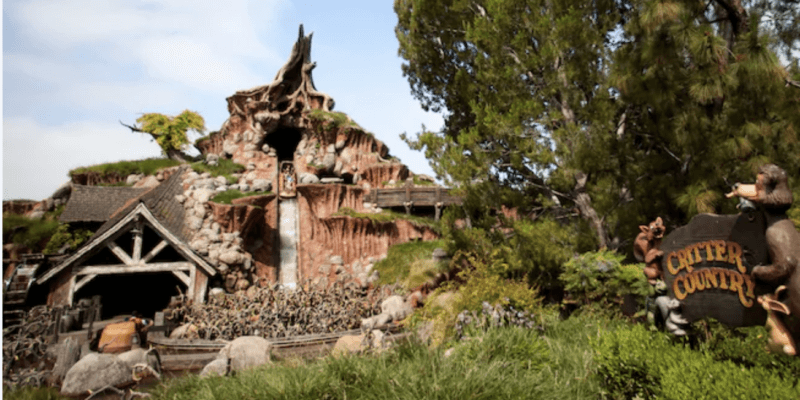 Taking a tour of Disneyland? Want to know where you can ride attractions like Splash Mountain and feast on treats like Tigger Tails and loaded fries? Critter Country is the place to go!

Read along in our guide to Critter Country at Disneyland so you can learn everything there is to do, see, and eat in this unique land at the Happiest Place on Earth, Disneyland Resort in Anaheim, California. 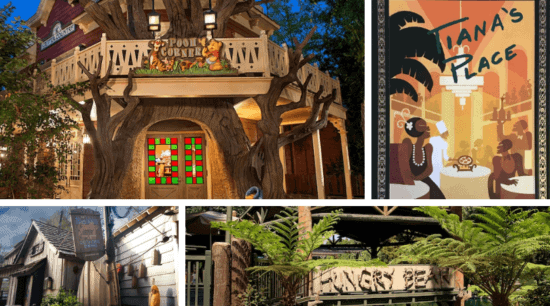 Theme of Critter Country in Disneyland

When meandering through Disneyland Park, the Happiest Place on Earth, you will find a variety of themed lands that transport you to different stories, eras, and even galaxies. Critter Country, the land of furry friends and silly songs, is one of those places.

From Disneyland — Memories of a Lifetime:

Every day is a “Zip-a-Dee-Doo-Dah” kind of day in Critter Country, a little world of shady trees and cool streams tucked away in a quiet corner of the backwoods of Disneyland Park. Nestled amid a forest of Aleppo, Canary Island, Monterey, and Italian stone pines, along with coast redwood, locusts, white birch, and evergreen elms, Critter Country is the perfect setting for long lazy afternoons and an opportunity to simply light in the down-home country atmosphere. Keen eyes might spit wily Brer Rabbit outsmarting Brer Fox and Brer Bear atop Chickapin hill…

Where to Find Critter Country in Disneyland

There are two ways to get to Critter Country in Disneyland: through Star Wars: Galaxy’s Edge or through New Orleans Square. When looking at a map of the theme park, this land is located on the far left side nestled in between the Haunted Mansion, Rivers of America, and Batuu.

Attractions and Experiences in Critter Country

The Many Adventures of Winnie the Pooh

The Many Adventures of Winnie the Pooh brought a Fantasyland-style dark ride to the corner of the theme park when it replaced the Country Bear Jamboree in the early 2000s. This attraction takes Guests through the stories of Pooh, Piglet, Tigger, and all of their friends from the Hundred Acre Wood.

A Storybook Come to Life
Get lost in the pages of A.A. Milne’s classic tales as you glide through Pooh’s most memorable adventures. Board your beehive and get swept up in a gust of wind with Piglet, Gopher, Eeyore, Kanga and Roo. Band together with Tigger and friends to stay afloat in a torrential downpour.

Celebrate sunny days and togetherness as Pooh finally gets his paws on some honey. This visual extravaganza filled with classic Disney songs is sure to delight cubs of all ages!

Inspired by the Disney Classic
Based on the stories by A.A. Milne, the Disney film was released in 1977 and included songs written by Disney Legends, the Sherman Brothers.

At Pooh Corner, you will find Winnie the Pooh merchandise galore, but it is truly known for delicious sweet treats and snacks! If you love Disney treats, we highly recommend purchasing them from Pooh Corner as you will often be able to find staples that are also sold at the Candy Palace and Marceline’s Confectionery without having to wait in a long line.

Although not an opening day attraction for Disneyland, Splash Mountain quickly became an icon of the theme park when it opened a few decades later in 1989. Many Disney fans feel a trip to the Happiest Place on Earth, the original Magic Kingdom, is not complete without a ride on Splash Mountain. But be warned, you will get wet, or possibly soaked!

You Will Get Wet!
This attraction includes 950,000 gallons of water, 3 dips and a 5-story drop. Where you’re seated will determine how wet you’ll get. Riders in the back may experience a sudden splash or spray; those who opt for the front can expect to get soaked.

A Splash of History
Many of the critters in the cast originally made their Disneyland park debut at the classic show America Sings, where they performed patriotic melodies in Tomorrowland from 1974 to 1988.

This is where will find all of your Splash Mountain merchandise in one place. If you are a fan of the attraction or you want to get a souvenir t-shirt to commemorate your experience, this is the place to purchase it!

Keep in mind that even though Splash Mountain is currently a Critter Country staple, the attraction is getting a major retheme in the future.

In summer 2020, Disney announced that Splash Mountain — which opened at Disneyland Park in 1989 with a theme inspired by Song of the South — will be reimagined and become an attraction based on the 2009 Walt Disney Animation Studios film The Princess and the Frog.

Splash Mountain – at both Disneyland park in California and Magic Kingdom park in Florida – will soon be completely reimagined. The theme is inspired by an all-time favorite animated Disney film, “The Princess and the Frog.” We pick up this story after the final kiss, and join Princess Tiana and Louis on a musical adventure – featuring some of the powerful music from the film – as they prepare for their first-ever Mardi Gras performance.

At this time, Disney has not announced when Splash Mountain will close in order for the massive refurbishment and attraction overhaul to take place. It’s clear that this will be a complete reimagining and it will take some time. Right now and for the time being, Guests will have the opportunity to experience Splash Mountain in its classic Critter Country attraction form. As soon as a closing date is announced and Disney shares a timeline for the new Princess and the Frog ride, we will update our website.

Hungry Bear Restaurant is one of our personal favorite spots at Disneyland Resort. Not only does it have the best, most affordable loaded fries and onion rings on Disney property, but also it offers breathtaking views of the Rivers of America and a calm, shady spot to unwind on a day at the California theme parks. This is also the last remaining spot in Disneyland with a theme inspired by the Country Bear Jamboree!

Critter Country is one of the many themed lands at the Disneyland Resort, and you won’t want to miss it on your next vacation! Planning a trip to the Happiest Place on Earth is a breeze when you work with the Authorized Disney Vacation Planners at Academy Travel, whose Disney travel agent services are completely free. Click here to book a trip and make you Disney dreams come true!

What is your favorite land at Disneyland? Let us know in the comments!