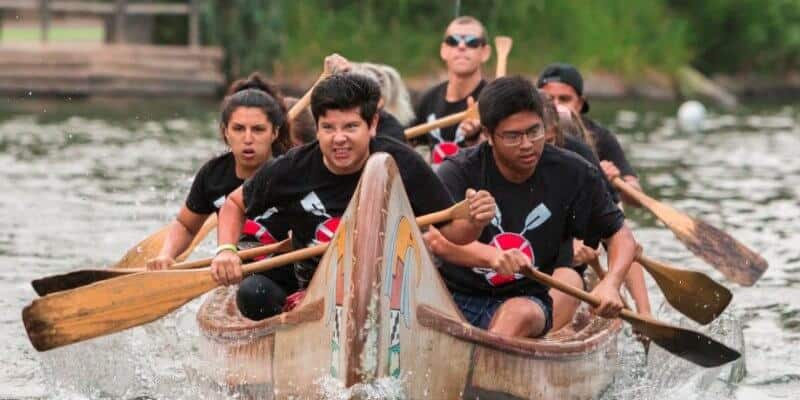 Even experts in every facet of Disneyana might be surprised to learn about a time-honored tradition at Disneyland Resort that mixes competition, camaraderie, Cast Members and canoes–and all before the park ever opens to eager Guests waiting to make their way down Main Street U. S. A.

This week, 86 teams of Cast Members–ten to fourteen members per team–met at the break of day aboard the Davy Crockett Explorer Canoes for Disneyland’s yearly summertime canoe races–a tradition more than 50 years in the making.

One of the teams calls themselves the “Golden Oars,” and one of the teammates is an 89-year-old former Cast Member who anxiously awaits the return of the vent each year.

The usual course runs from approximately the Haunted Mansion to the Hungry Bear Restaurant. But there are a few teams that compete in a timed rowing competition that winds all the way around Tom Sawyer Island.

It’s a pleasantly scenic route–one that runs along the backwoods of Frontierland, along the railings of New Orleans Square and past the high peak of Chick-A-Pin Hill that looks down on Critter Country.

Understandably, the top two winning teams usually consist of former and current Cast Members, each of whom either worked–or is working–the Davy Crockett canoes attraction in Critter Country.

That was the beginning of a challenge between Frontierland Cast Members and Adventureland Cast Members that birthed a tradition of canoe racing that has since spread to Walt Disney World, Tokyo Disney Resort, Disneyland Paris and Hong Kong Disneyland Resort.

Do you enjoy the Davy Crockett canoes? Are you a Disneyland Cast Member–former or current–who participates in the yearly races?