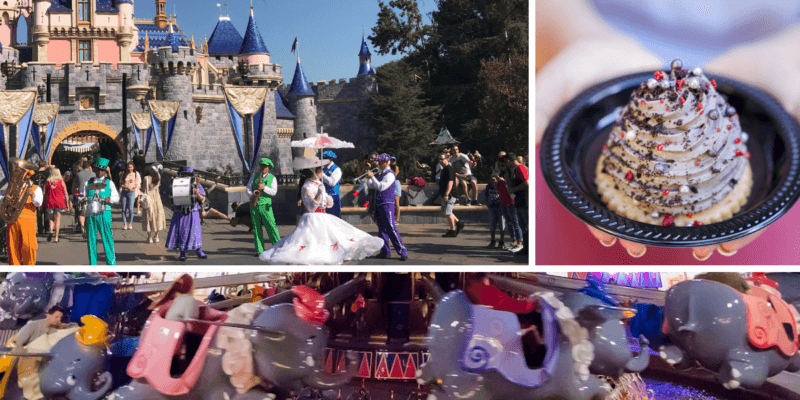 When you walk into Disneyland park, you enter a world of Yesterday, Tomorrow, and Fantasy. So in this Disneyland guide, we’re hopping aboard a flying elephant to soar to Neverland and encounter magic beyond our wildest dreams. It’s time to explore Fantasyland, the most magical land in the Happiest Place on Earth.

Click here to book your next trip to Disneyland Resort!

Disneyland is made up of several lands, but one of the most iconic is Fantasyland. Here, you walk through the centerpiece of the original Magic Kingdom — Sleeping Beauty Castle — into a world of pure magic and imagination.

From Disneyland: Memories of a Lifetime, we get an idea of how Walt Disney himself had always thought of this happy little kingdom:

Cross over the moat and through the archways of Sleeping Beauty Castle to enter “the happiest kingdom of them all” — Fantasyland. Enchanting tales of childhood adapted from Walt Disney’s classic animated films come to life in this timeless realm of imagination. You can visit Never Land, sour through the skies with Dumbo, journey with little Alice to Wonderland, and travel the road to Pleasure Island with Pinocchio.

“Here is the world of imagination, hopes and dreams,” Walt Disney stated on opening day. “In this timeless land of enchantment, the age of chivalry, magic, and make-believe are reborn–and fairy tales come true. Fantasyland is dedicated to the young and the young-in-heart — to those who believe that when you wish upon a star, your dreams come true.”

Now, enter Disneyland, walk through the Sleeping Beauty Castle gates, and enter a world beyond your wildest dreams. It’s time for fairy tales to come to life in Fantasyland!

What You Can’t Miss in Fantasyland

We love this magical area of Walt’s original theme park. There’s something so charming about it! Some of the oldest Disney attractions are right here, and there are also plenty of new things to see and do while you meander this fairy tale land.

Here are a few of the things you can’t miss on your visit.

Did you know you can actually step inside the Disneyland castle? This is one of the most unique and treasured areas in all of Disneyland.

Step into the Story

Explore winding passageways where the epic tale of Princess Aurora is told through spellbinding dioramas.

A Walk Through History

Inspired by Neuschwanstein castle in Bavaria, Sleeping Beauty Castle opened on July 17, 1955, along with Disneyland Park. Guests could not actually walk through the castle’s interior until 1957.

The drawbridge has only been lowered twice—once at the opening of the park in 1955 and again in 1983 at the rededication of Fantasyland.

Note on accessibility: any Guests who are unable to walk through the attraction (which requires walking up and down narrow flights of dimly-lit stairs) can view a video version. All you have to do is ask a nearby Cast Member.

Matterhorn Bobsleds is one of the oldest attractions at Disneyland Resort. A true original like Mickey Mouse himself, this is a must-do when you are at Disneyland as it’s entirely unique to the park.

Additionally, dark rides — like Alice in Wonderland, Snow White’s Scary Adventures, Peter Pan’s Flight, Mr. Toad’s Wild Ride, and Pinocchio’s Daring Journey — bring about a wave of nostalgia. These attractions are Disneyland originals, and although they have gone through some refurbishments, they still offer the same magic they always have since they debuted decades ago.

Spot Familiar Faces
The ride opened in 1966, but additional characters debuted in 2009—thoughtfully placed in the appropriate nations.

We had to make a special note of “it’s a small world” since the original version of this classic attraction is right here at home in Disneyland!

Characters are known to have a magical presence in Fantasyland. We often spot our favorite Disney couples — from Belle and the Beast to Aladdin and Jasmine to Rapunzel and Flynn — in Fantasyland. And sometimes, we can even Mary Poppins and Bert dancing with the Pearly Band in front of Sleeping Beauty Castle!

Be sure to always check the Disneyland app for information on characters in the park — but also keep your eyes peeled. You never know when Peter Pan will want to whisk you away to Neverland (or when Captain Hook will want to teach you to be a pirate!).

Nothing says Disney Parks like memorable snacks! Here are a few of our favorite things to eat in Fantasyland, and where to find them.

Have you always wanted to try the famous “Grey Stuff” as seen in Beauty and the Beast? Well thanks to Disney Parks, you can!  This is a must-try snack since it is so iconic. And since Red Rose Taverne (across from Casey Jr.’s Circus Train and near the pathway that leads into Frontierland) is a quick-service dining location, the Grey Stuff is easily accessible — even from Mobile Order!

Another snack you can’t find anywhere else in DLR is the cheddar garlic bagel twist from Maurice’s Treats. This snack cart is found in Fantasy Faire, the alcove where Disney Princess meet and greets typically occur.

This snack — which could be a light meal! — is a departure from the classic turkey leg but just as satisfying for carnivores. Find it at Troubador Tavern just across from the entrance to ToonTown.

Attractions in Fantasyland at Disneyland

Here is a complete list of every attraction you will find in Fantasyland at Disneyland — many of which are perfect for kids and are family-friendly, so parents, take a look!

Restaurants in Fantasyland at Disneyland

Here is a complete list of all of the dining locations you will find in Fantasyland at Disneyland:

…as well as churros, pretzels, popcorn, turkey legs, and more, all found at carts throughout the land.

Want to visit for yourself?

If you want to visit the Happiest Place on Earth so you can meander through the historic Fantasyland, see your favorite fairy tales come to life, fly to Neverland with a fairy, spin in a giant teacup in Wonderland, and try the Grey Stuff (it’s delicious!), click here to book a trip with the Authorized Disney Vacation Planners at Academy Travel!

Comments Off on Guide to Fantasyland at Disneyland