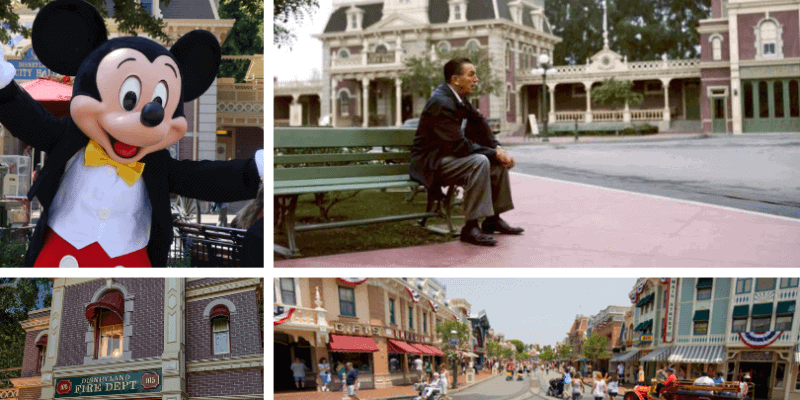 We love Main Street, U.S.A. Consistently ranked among the best lands at Disneyland Resort and replicated at Disney Parks around the world, the original Main Street is incomparable. This land is your introduction to Disneyland park, the “opening credits” of your day at the Happiest Place on Earth.

But how did Main Street, U.S.A. come to be? What makes it so special? And why do we think you could spend hours — if not an entire day — hanging out in this area of Disneyland?

In this edition of our Guide to Disneyland, you’ll learn everything you need to know about Main Street, U.S.A.

Main Street, U.S.A. is as old as Disneyland itself. Though this area has undergone some changes throughout the past six decades, it still remains the whimsical, turn-of-the-century, charming street that Disney fans have always known it to be. D23 notes that Walt Disney himself wanted this area of Disneyland to present an “idealized town at the turn of the century.” Inspired by Walt’s childhood, this street uses forced perspective to seem larger, and the windows honor those who played an instrumental role in the creation of the first Disney Park.

To give you a bit more of an idea of the significance of this land, here is an excerpt from the book Disneyland: Memories of a Lifetime describing Disney Main Street, inspired by Marceline, Walt’s hometown:

Disneyland Park memories begin on Main Street, U.S.A. Time seems to slow and soften amid the smells of freshly baked muffins and candies, the steady clip-clop of the horse-drawn streetcar, and the twinkling pin lights outlining the gingerbread trim of the buildings. Through the years Main Street has become an unofficial hometown for the many Disneyland guests who have traversed its charming lane, experienced its unique shops, been entertained by its performers, and dined from its delightful menus.

“Here is America from 1890 to 1910, at the crossroads of an era,” Walt Disney once commented. “Here the gas lamp is giving way to the electric lamp, and a newcomer, the sputtering ‘horseless carriage,’ has challenged Old Dobbin for the streetcar right-of-way.” Inspired by Walt’s own hometown of Marceline, Missouri, Main Street is the essence of the hometown American that greeted the dawn of the 20th century.”

Before you get to Main Street, you’ll enter Town Square. This area is the home to the Main Street Train Station of the Disneyland Railroad, an opening day attraction. It’s also where you’ll find Great Moments with Mr. Lincoln, one of the most historic and meaningful attractions in not just Disneyland, but theme parks around the world. And of course, we can’t discuss Town Square without sharing more about Walt’s apartment.

As mentioned, Main Street drew inspiration from Walt Disney’s hometown of Marceline. And even though it wasn’t actually a real-life town, it still was Walt’s home away from home in many ways. One homey aspect of Disneyland Park is located at the Disney Main Street Fire Station.

The Fire Station in Town Square has been at Disneyland since the theme park opened in 1955. And ever since the early years of the Happiest Place on Earth, Walt Disney had his very own apartment above the fire station. He would often stay there, and it became a place where he could relax and spend time with family. When he was “home” in the apartment, Walt would turn on a lamp in the window. And since he passed away, that lamp remains on, illuminating the window of the apartment and letting Guests know that Walt’s spirit lives on in Disneyland.

List of Restaurants, Shops, and Attractions on Main Street, U.S.A.

Here is a complete list of locations on Main Street and in Town Square.

…and of course, there are plenty of carts where you can get donuts, churros, popcorn, and more!

What to Eat On Main Street at Disneyland

Where are all the foodies? One of the most magical Disney meals is a meal on Main Street. There’s nothing like taking in the atmosphere while sitting outside at Carnation Café, or grabbing a coffee at Market House and a seasonal cake pop from the Candy Palace and people watching from a bench.

Below are our top picks for where to eat on Main Street.

This is Inside the Magic’s top recommendation for breakfast on Main Street. Who can go wrong with Mickey waffles? Whether you want this iconic Disney breakfast or something savory or seasonal, you can’t go wrong with eating breakfast at Carnation Cafe. Pro tip: ask for an outdoor table so you can people watch.

Below is the official description of Carnation Cafe:

Dine on classic American comfort food, including some of Walt’s favorite dishes, at this Main Street, U.S.A. institution.

A Legendary Locale
Relax under a candy-striped umbrella and watch the world pass by—or unwind inside the Victorian-style dining room as waiters in vintage dress bustle past. The Carnation Café takes you on a trip to the turn-of-the-century with a nostalgic menu of delicious delights for breakfast, lunch or dinner.

This is Inside the Magic’s top recommendation for lunch on Main Street. If you go to Disneyland, you have to get a corn dog. There are other spots to get them on Disney property, but the Little Red Wagon is iconic. This makes for a great lunch (though we’d eat a Disney corn dog any time of day).

Jolly Holiday Bakery Café has some of the most unique snacks on Disneyland property, but it takes the cake for our top snack destination on Main Street. Here, you’ll find iconic sweets like the Matterhorn macaroon as well as great seasonal goodies like pumpkin cheesecake during the fall. There is always something new to try at Jolly Holiday, making this a can’t-miss food stop on your visit!

Relax on the charming garden patio of this Mary Poppins-themed eatery with fresh baked goods, coffee and tea. After 10:30 AM, café-style lunch items are served.

If you want to enjoy one of Walt’s favorite meals on your trip, you’ve got to have dinner at Plaza Inn. Formerly known as the Red Wagon Inn, the Plaza Inn has been feeding Guests since the theme park opened in 1955.

Dine on home-style favorites in a lavish Victorian setting, one of the original landmarks of Disneyland Park. Drenched in dazzling décor, it’s no surprise that the Plaza Inn, which opened in 1955, was one of Walt Disney’s favorite places to dine.

It’s also become a go-to spot for many Guests over the years—and when you taste the restaurant’s signature Specialty Chicken, you’ll understand why. This delicious dish features 3 pieces of herb-seasoned fried chicken served with mashed potatoes, mixed vegetables and a buttermilk biscuit.

Shopping on Main Street at Disneyland

Heading into the park and only want to have to look inside one store? This is your one-stop shop. Similar to World of Disney at Downtown Disney, the Emporium is a large Disney store that sells anything and everything:

Though they sell snacks, this is technically a merchandise location. But we’re happy to include it! Here, you’ll find all of those delicious treats like caramel apples and churro toffee, and often this is the place where you’ll find those seasonal goodies for Halloween, Christmas, Valentine’s Day, and other holidays.

If you’re looking for a unique keepsake, we recommend stopping by the Silhouette Studio. A silhouette portrait can make for a wonderful souvenir — and you can even bring in a photo of your pet to have their silhouette created, as well!

Transform a magical day into a keepsake treasure, courtesy of silhouettes featuring your entire family. Watch in wonder as our artists create at a rate of 60 seconds per portrait—you can even tuck their work into its very own picture frame!

Who to Find on Main Street

You can always spot some characters and “residents” roaming around Main Street. We often look forward to seeing Mickey and Minnie, the Dapper Dans, and of course the Disneyland Band! You never quite know who you’re going to find, so grab a snack and pick a bench in Town Square, or chill out at the Main Street Train Station overlooking the entire park.

Book Your Next Magical Vacation!

Looking to plan a Disney trip? We’ve got you covered. We always recommend the Authorized Disney Vacation Planners at Academy Travel, an Earmarked Diamond travel agency. Academy Travel specializes in all things Disney and can help plan your perfect trip to Disneyland. Click here for more information and to book a vacation to the original Happiest Place on Earth!

Comments Off on Guide to Main Street at Disneyland