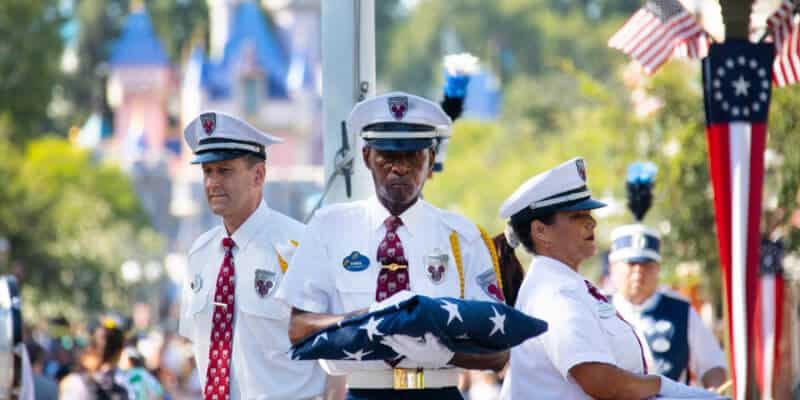 For many years, Disney’s daily Flag Retreat Ceremony has become a tradition of honoring and supporting our nation’s military heroes. Located near the entrance of Main Street, U.S.A., in Walt Disney World Florida and Disneyland in California, Guests come to celebrate and thank veterans of the past and present in a patriotic ceremony that touches the hearts of many Americans and out of state visitors from around the world.

So, it is only fitting that we share the return of this star-spangled event on Independence Day. As per Disney Parks Blog,

Magic Kingdom Park welcomed back their daily flag retreat July 1, resuming the tradition of selecting an active-duty military member or veteran from among that park’s daily visitors. As shadows grew long in the late afternoon in Town Square, many watched silently as a guest U.S. Air Force veteran joined members of Magic Kingdom’s security team to respectfully lower the flag and carry it in a processional down Main Street, U.S.A. The ceremony included the recitation of the Pledge of Allegiance, and the singing of “God Bless America” and the “Star Spangled Banner,” accompanied by the Main Street Philharmonic marching band.

“It has been an honor for our security cast to keep our flag flying every day over Magic Kingdom since the park first opened in 1971,” said Army veteran Eileen Underwood, Magic Kingdom’s senior security manager. “We were thrilled to resume our daily flag retreat ceremonies to honor our country and those who serve around the world in defense of our freedoms. It’s a special moment for all our guests that really reaffirms the feeling that this is truly a magical place.”

When Disneyland reopened to Disney fans on April 30, many Guests were thrilled to say the pledge of allegiance once again and hear the trumpets sound off in celebration. Senior Production Manager of Disneyland, and Navy veteran Nick Filippone, was one of them who was overjoyed and emotionally stated,

“I was so proud to see our Disneyland security and entertainment teams once again present our beloved flag retreat ceremony in Town Square from the very first day we were able to welcome Guests back,” said Nick. “We have been honored to continue Walt’s patriotic legacy with keeping the American flag flying throughout the park’s closure showing that no matter what else was happening, we could maintain this element of our heritage.”

We also invite those interested in learning how to build or enhance their organization’s hiring, training and support of military veterans and spouses to attend the 2021 Veterans Institute Summit presented by Disney Institute on September 13-14, 2021 at Walt Disney World Resort.  Registration for this complimentary event is now open.

If you’re heading to either Disney Park today, I hope you get to experience this wonderful and heart-felt event and we at Inside the Magic wish you and your family a spectacular fourth of July!

What is your favorite memory of this patriotic ceremony? Let us know in the comments below!

Visiting Walt Disney World or Disneyland soon and need help organizing your trip? Let our friends at Academy Travel help, plus they are EarMarked Diamond!