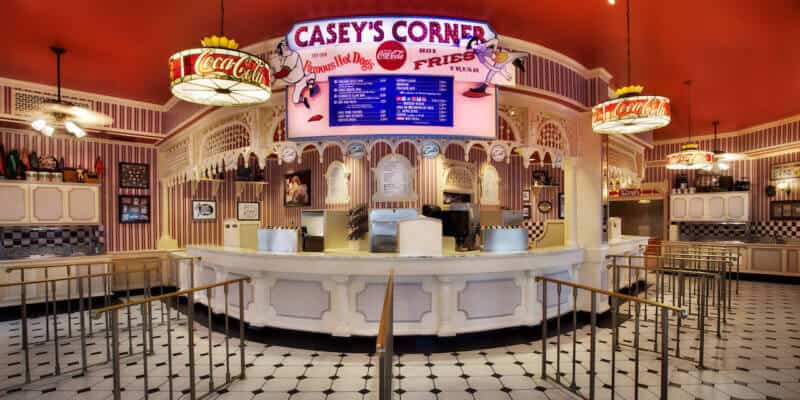 Get ready to hit your craving for hot dogs out of the park! Casey’s Corner on Main Street, U.S.A., will reopen June 30 with their classic all-beef hot dogs. Catch hold of a Chili-Cheese All-Beef Hot Dog or dig into a pile of Corn Dog Nuggets with, of course, cheese sauce. And my fav, the plant-based Loaded Slaw Dog (plant-based sausage topped with pickled slaw, barbecue vegan aïoli, and roasted corn relish), is back! The Frozen Mint Julep Lemonade is a refreshing homerun to go along with your hot dog. And don’t forget, mobile order is available at Casey’s Corner.

Casey’s Corner reopening on June 30 is amazing news for Disney fans. The Magic Kingdom staple — located on the corner of Main Street, U.S.A. — did not reopen with the rest of Walt Disney World Resort last summer. It has remained closed for quite some time, but starting tomorrow, the restaurant will welcome Guests through its doors once again.

The official Casey’s Corner reopening announcement touches on the menu update, which you can read more about here.

With the official update to the Casey’s Corner menu as well as the updates that were made to the interior of the restaurant. We recently reported on the tables and chairs that were seen inside the restaurant, and Magic Kingdom Guests have been closely watching the Main Street dining location for some time now, hoping for a clue for a reopening date. Now, we know for a fact that this week will mark a new beginning for Casey’s Corner and Guests will get to enjoy their favorite Disney World foods once again.

We know we can’t wait to enjoy some classic Casey’s corn dog nuggets and hot dogs while waiting for the Happily Ever After fireworks to begin. Who else wishes they were on the Hug Grass right now? The reopening of Casey’s Corner signals that Disney World is continuing to move “back to normal” — and we know that there are so many longtime fans who are thrilled about it.

Are you as excited for the reopening of Casey’s Corner as we are? Let us know in the comments and click here to book a trip!