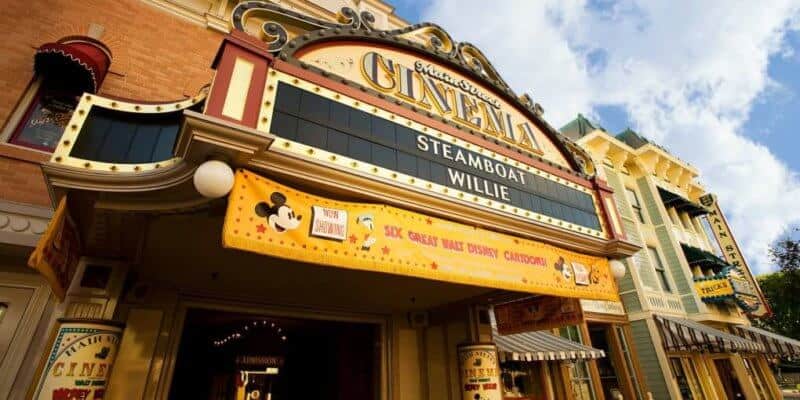 Disneyland’s decision to sell merchandise inside Main Street Cinema lasted less than a week before the company removed all merchandise from the location altogether. After seeing that Disney had moved merchandise into the original 1955 Main Street U.S.A. attraction and placed a “Cartoons and Collectibles” sign outside the attractions’ doors, fans took to social media to express their distaste for the decision. And as it turns out, Disney listened.

OC Register shared that all merchandise was removed from Main Street Cinema on Thursday and Disneyland has instead moved park benches into the cinema so guests can sit down inside. The benches are part of a series of tests Disneyland is performing in order to bring more people into Main Street Cinema. Other tests include adding a snack option to the theater. While Disneyland fans weren’t happy at the decision to add merchandise into the cinema, Disneyland shared with OC Register that adding merchandise brought around 10 times the typical number of guests visiting the theater.

As we reported earlier this week, Main Street Cinema is known among Disneyland regulars as an air-conditioned haven away from the hustle and bustle of the theme park, where guests can step back in time to the days when Walt Disney himself walked Main Street, U.S.A. and enjoy some original Mickey Mouse cartoons. The benches seem to encourage more guests to sit and stay a while as they meander into the cinema.

The benches may not stay for long, and it’s safe to say that bringing the merchandise back to Main Street Cinema would result in an outcry from fans, even if it brings more foot traffic to the theater. Still, we hope that the merchandise only lasting a few days is a sign of Disneyland’s care for guest opinions and that Main Street Cinema is here to stay for as long as Disneyland is.

After facing criticism from fans regarding the decision to sell merchandise at the original Main Street Cinema attraction at Disneyland, Disney issued an official statement.

“We continue to operate Main Street Cinema as a theater and there have been no changes to film showings,” Disneyland said in an official statement. “We’re looking at a variety of ways to drive interest in this beloved location.”

OC Register reports that Disneyland officials said the attraction has not officially been turned into a merchandise location and still operates as the same attraction it has been known as since it opened on Main Street, U.S.A. in 1955. According to the local Orange County news outlet, officials are currently testing a number of options for driving more traffic into the cinema, although additional options for the attraction have not yet been announced and a timeframe for the test has not been given.

“We’re looking at a lot of different options for what we could do,” said Disneyland spokesperson Suzi Brown.

Other than being the Happiest Place on Earth, one of the greatest appeals of Disneyland is its value of tradition and honoring of the past. Since 1955, Disneyland has transported guests back in time the moment they set foot through the park gates and cross under the Disneyland Railroad. And Main Street, U.S.A. is as charming and timeless as Disneyland gets.

So when Disneyland locals and long-time fans realized that Disney had transformed one of the most time-honoring Disneyland attractions into a gift shop, you can imagine they were not happy. The Main Street Cinema, one of the original attractions from 1955 located on Main Street, U.S.A., has recently begun selling merchandise…when it’s sole purpose is to entertain guests with classic Disney cartoons, the same cartoons that families would have enjoyed back when Disneyland first opened. While the shop still plays the cartoons it usually did, it seems as though Disneyland may be looking to fill the space with merchandise available for purchase, instead. Now, as a sign has been placed on the sidewalk to draw guests in to enjoy “cartoons and collectibles,” and multiple display tables and racks house the same Disney gifts you could find in other merchandise locations throughout the resort.

Many Disneyland changes and updates are met with mixed opinions, but this seems to be one change that a majority of fans are unhappy about. The hashtag #MainStreetCinema was even trending on Twitter for quite some time over the weekend, as fans took to social media to voice their opinions on Disney’s decision to implement merchandise inside this classic Disneyland attraction. Here’s what some of the fans have to say:

@Disneyland @DisneylandToday I’m first to defend Disneyland when it comes to unpopular changes. However, I’m appalled by your decision to turn The Main Street Cinema into a store!! This is an insult to Walt’s memory. It all started with a mouse. Not merchandise. #Disneyland

This is a disgrace to what Walt intended the Cinema to be used for.@Disneyland Do the right thing and put everything back. https://t.co/vEJTWeUXeG

Merchandise at #MainStreetCinema in #DISNEYLAND is no big deal! Who even notices stuff like that? pic.twitter.com/bz56RSfdub

This is frankly disgusting, @Disneyland @DisneylandToday and you should remove it immediately. Honestly, how much extra money could you be making selling THIS merch here? It’s the same stuff you can buy in other shops throughout the resort! Who is this for??

Not to beat a dead horse @DisneylandToday, but currently Main Street Cinema is trending on Twitter. Just a hint at how upset people are over this felonious attack on a piece of Disneyland history. This decision maker needs to be dealt with.

I wonder when @Disneyland / @DisneyParks is gonna turn Walt's Apartment into a Starbucks or Uncle Walt's Main Street Treasures gift shop, I mean they couldn't leave the Main Street Cinema Alone, so obviously nothing is sacred. #mainstreetcinema

What do you think of the changes made to the Main Street Cinema? Let us know in the comments!