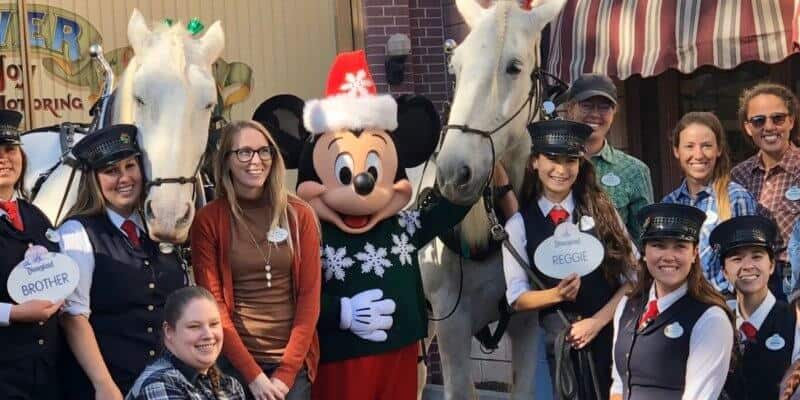 One of the most iconic and memorable parts of walking down Main Street U.S.A. is hearing that click-clacking of the horse’s hooves as they pull the famous trolley down the middle.

There were actually two white draft horses that worked at Disneyland for the past decade. Reggie and Brother took turns transporting Disney guests down Main Street U.S.A. in those one-of-a-kind and vintage trolleys.

It was often difficult to tell the difference between the two, but there is one distinction (much like the way you tell Chip and Dale apart from one another).

That’s right — The color of their noses. Brother is the one with the pink nose!

Another way to tell the difference between these two draft horses is their personalities. Reggie typically took the morning shifts in Disneyland because Brother isn’t a morning horse and tended to sleep in through the sun and then took over the later shifts in the day.

But now, we have some news to report about the pair — Reggie and Brother have officially retired and have been adopted by a Disney cast member!

Both of these draft horses have been pulling trolleys down Main Street U.S.A. for more than a decade but now, Reggie and Brother will spend their retirement happily on a farm in the Norco area, according to Disneyland officials.

Two @Disneyland greats retired today, Brother and Reggie. They pulled wagons down Main Street, U.S.A. for 11 years. Now 18, they were adopted by a Cast Member and will live out the rest of their days on a bucolic farm. pic.twitter.com/GkP1HVvzs0

A Disneyland fan, @Whitesox89, tweeted “So long to 2 of my favorite Disneyland horses. I’ll really miss them, but I wish them all the best in their very well deserved retirement and I thank them so much for their many years of work.”

The horse-drawn trolleys down Main Street U.S.A. have been a tradition ever since the park opened in 1955. Horses pull the trolleys as they transport Disney guests right down the middle of Main Street U.S.A., from Sleeping Beauty Castle to the Disneyland Train Station.

The Disneyland horses are treated just like family and are even considered cast members themselves. They even have their own oversized cast member name tags in Disneyland’s Circle D Ranch‘s tack room!

While Reggie and Brother were off duty from pulling the trolley down Main Street U.S.A., the duo could be seen appearing in city parades throughout Southern California as well as pulling Cinderella’s Coach for fairy tale weddings at Disneyland!

Reggie and Brother are, in fact, brothers as they have the same father and came to Disneyland at the same time from Blackpark Farms in Canada.

Both Reggie and Brother are 18 years old.

We are wishing Reggie and Brother a happy retirement! Are you sad to see the duo retire? Let us know in the comments.