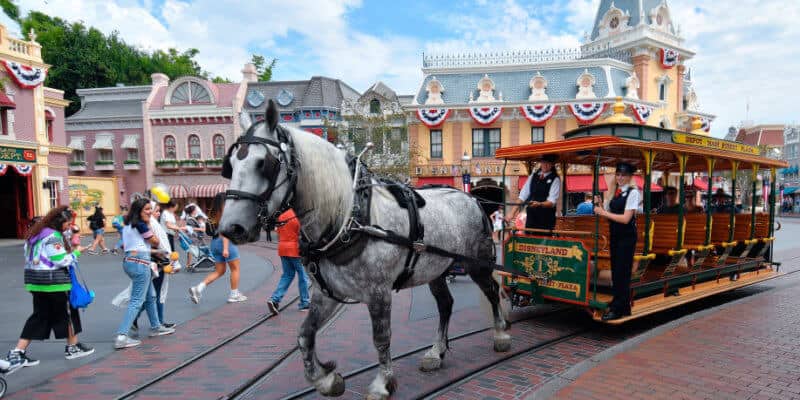 Named for one of the most memorable characters from Disney’s classic 1964 film adaptation of Mary Poppins, Bert is six years old and weighs in at approximately 1,800 pounds. Bert’s size and strength make him the perfect addition to the Disneyland team, which pull guests using 19th century-inspired streetcars that offer minimal resistance thanks to the design of their metal wheels and track.

Bert was born and raised on a family owned and operated farm in Bent, Montana where he displayed his friendly personality from an early age, making him a true star for the Disneyland family. Disney Cast Members have quickly picked up on Bert’s personality knowing that such tricks as blowing strawberries are ploys of Bert’s to get some extra attention and pets from his human friends.

Percheron Draft Horses like Bert are named for the Perche Province in France where the breed originates from. Bert’s gray and white coat makes him a stunning addition to the team of horses at Disneyland, eight of which are Percheron like Bert and two are half-Percheron horses. Bert is excited to be taking over the “reigns” for Holly, a Belgian Draft Horse who after a 15 year career on Disneyland is living out her retirement at the home of a Disney Cast Member.

While Disneyland’s total fleet of currently consists of 16 horses (and will increase to 18 by this fall), only about four horses work on Main Street each day. (The park typically operates with two horses at a time in two-three hour sets.) Before appearing in the park, the horses are trained at Disneyland’s Circle D Ranch in Norco, CA, about an hour east of Anaheim. When Disneyland’s horses complete their training, they celebrate with a “graduation” of experiencing their first trips down Main Street U.S.A.

Next time you visit Disneyland’s Main Street U.S.A., give a warm welcome to Bert, and keep an eye out for the next additions coming to the fleet later this year!

Want to plan a trip to Disneyland to visit Bert and the other Main Street horses? Check out our friends at Academy Travel, Authorized Disney Vacation Planners who can help give you the Disneyland trip of your dreams. Click here for a no obligation vacation quote from Academy Travel to plan your next visit to see Bert and everything else Disneyland has to offer!

Have you ever seen the horses that work on Main Street U.S.A.? Share your vacation memories with us in the comments!