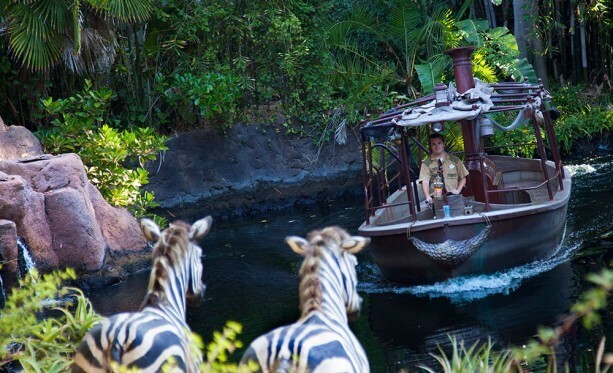 When you enter Disneyland Park, the original Magic Kingdom in California, do you go right toward Tomorrowland or left toward Adventureland? For those seeking adventure, this guide is made just for you. Here, we set a course for the rivers of the Jungle Cruise as we share everything you need to know about Adventureland at Disneyland.

Adventureland is one of the most beloved lands at Disneyland for the sense of wonder and exploration it brings. Over the years, the land has undergone its fair share of changes, but the true spirit of Adventureland — adventure itself — has remained intact.

From Disneyland: Memories of a Lifetime:

As brave Disneyland Park guests enter Adventureland their senses are stirred by the sights of intense jungle foliage, the harrowing sounds of not-too-distant wild animals, and the aromas of tropical blossoms. In this remarkable realm of adventure and exploration guests experience n amazing amalgam of many of the world’s far-off places and uncharted regions.

“Here is adventure,” Walt Disney commented. “Here is romance. Here is mystery. Tropical rivers…silently flowing into the unknown. The unbelievable splendor of exotic flowers…the eerie sound of the jungle…with eyes that are always watching. This is Adventureland.”

Now is the best time to book a trip to the Disneyland Resort!

What to see while in Adventureland at Disneyland

Here are some of our must-sees in Adventureland, one of our favorite areas in Disneyland Park.

As you meander the streets of Adventureland, there are plenty of hidden gems to be on the lookout for. No matter where you look, there is something to see. Every sign, statue, figurine, and piece of writing is intentionally placed. While you are waiting in line for an attraction or sipping on a Dole Whip float, keep your eyes peeled. This is probably one of the best lands in the park for a game of I Spy!

Also, the Adventureland Bazaar is one of the best gift shops in the park as it sells merchandise specific to the Adventureland attractions (Jungle Cruise, Indiana Jones Adventure, Walt Disney’s Enchanted Tiki Room) as well as tropical-inspired merchandise, like Aulani-inspired Minnie ears and tropical patterned clothing. You can also find very fun and unique toys for kids at the Bazaar, so if there is an animal lover in your family, this is the gift shop to stop at while on your Disneyland vacation.

Tarzan’s Treehouse is a walkthrough attraction in Adventureland. It is highly popular among kids as it allows them a place to play while at the park, and the scenes throughout depict the classic characters from the animated film Tarzan. But this area actually offers some of the best views in all of Disneyland. You can see New Orleans Square, Adventureland, and even Big Thunder Mountain and the Rivers of America, as well as other classic Disneyland landmarks.

What to eat while in Adventureland at Disneyland

Want to know what to eat while you are in Adventureland (or particular, what sweet, ice cream treat you can buy here)? Two words: Dole Whip.

There are a couple of notable dining options here, including two Guest-favorite places to eat in the theme park that also happen to be located in Adventureland.

Want to try all the best foods at Disneyland Resort? Click here to book a trip with Academy Travel!

Although Dole Whip is sold at a few different locations on Disneyland Resort property, our favorite place to purchase this sweet treat is at the Tropical Hideaway. This quick-service dining location offers a variety of Dole Whip snacks, as well as bao and lumpia. Click here to view the full menu.

If you are craving a high-protein snack, we recommend Bengal Barbecue. Here, you will find meat or vegetable skewers that are sure to satisfy every savory craving. Plus, you can take them on the go, or there is plenty of seating nearby!

Some of the most popular and historic attractions at Disneyland Park are located in Adventureland. This area of the original Magic Kingdom truly has it all — amazing animatronics, popular rides, and of course, adventure!

Ready to head to Disneyland Resort? Click here to book a trip!

Walt Disney’s Enchanted Tiki Room is a historic attraction that paved the way for audio-animatronics in Disney Parks around the world.

A Musical Paradise
An extravagant feast for your eyes and ears, this theater-in-the-round show invites you to experience the beauty and magic of the Pacific Islands.

Take your seat in an air-conditioned ceremonial house in the heart of Polynesia. As the lights dim, 4 talking macaws spring to life. Before long, the chorus of crooning birds is joined by an enchanting cast of over 225 choreographed Audio-Animatronics performers.

Sing along and enjoy the magic of this jubilant Disney classic!

Enter an Enchanted Garden
As you gather on the lush patio before the show, carved totem poles representing island gods spring to life and introduce themselves.

Don’t forget to treat yourself to a world-famous Pineapple Dole Whip® from the patio-side Tiki Juice Bar while you wait!

An Animation First
The Audio-Animatronics technology that powers the show was introduced to the world when Walt Disney’s Enchanted Tiki Room debuted in 1963 at Disneyland Park.

This groundbreaking technology allowed animators to synchronize movement, audio and visual effects, paving the way for other classic attractions like “it’s a small world”, Pirates of the Caribbean and Haunted Mansion.

Dinner with the Birds
Walt Disney originally envisioned the Enchanted Tiki Room as a dinner show. However, he knew the attraction would be so popular that he changed the format to accommodate more Guests before it opened.

Today in the Tiki Room
The current show has been enhanced with a state-of-the-art show-control system, remastered audio and energy-efficient lighting—while maintaining all the charm and wit of the original.

Guests can now dine on the flavors of the tropics at The Tropical Hideaway restaurant right next door. You lucky people you!

Indiana Jones Adventure is certainly one of the most thrilling attractions at Disneyland, even decades after it first opened. It continues to anchor Adventureland as a must-visit land in Disneyland Park and draws long lines daily.

Know Before You Go
Indiana Jones Adventure is neither a roller coaster nor a typical slow-speed attraction like Haunted Mansion. You’ll board a 12-person vehicle for a fast-paced thrill ride that realistically simulates quick driving over rough terrain.

A classic Disneyland attraction, Jungle Cruise is often a can’t-miss ride on a day at the park. But recently, Disney announced that the Jungle Cruise would be undergoing some changes — click here to read more about that!

Head off to Adventure
Board a canopied tramp steamer and leave civilization behind on a tongue-in-cheek journey through the globe’s most “treacherous” rivers—and oldest gags.
Highlights of your unforgettable adventure include:

A Classic Cruise
The original Jungle Cruise opened on July 17, 1955 at Disneyland Park. Based on Disney’s award-winning True-Life Adventure films, the attraction had a more educational tone. In the early 1960s, Walt Disney introduced more drama and asked animator Marc Davis to sketch some humorous gags.

At Home in the Jungle
Your adventure begins as you clamber up a tree stump and cross a rope bridge high in the sky. Overgrown with vines and constructed out of parts salvaged from his tragic shipwreck, the tree house features ingenious inventions and vignettes from Tarzan’s epic life story.

Stay and Play at Base Camp
Down below, explore the gear Tarzan and Jane left behind at Base Camp.

Want to book a trip to the Happiest Place on Earth so you can experience all of the adventures that Disneyland has in store? Click here to work with our favorite Disney travel agents at Academy Travel to make your vacation dreams come true!

What is your favorite land in Disneyland? Let us know in the comments!

Comments Off on Disneyland Guide: Adventureland