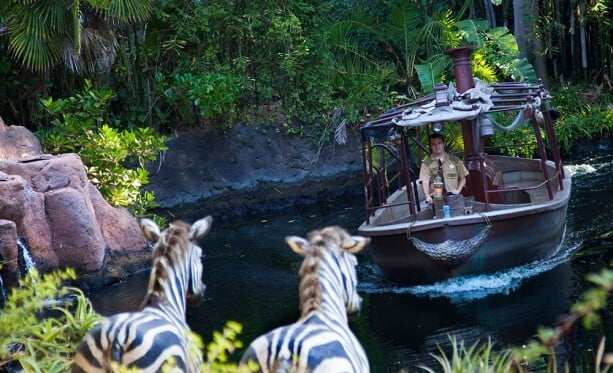 As the Jungle Cruise reimagining takes place “live” on the East Coast, Disney Parks fans have been wondering how the transition to the new storyline will affect the reopening of the fan-favorite ride at Disneyland Park.

Would the attraction open to adventurers when the Park reopened? We’ve learned that no, the Jungle Cruise ride will stay closed this spring, but straight from Ken Potrock, President of Disneyland Resort, there is a new opening date!

Magic Kingdom’s interaction of the Adventureland boat ride was already announced to be staying open when changes took place (like the rhino pole and Trader Sam’s removal and subsequent gift shop). But Disneyland’s opening day Jungle Cruise attraction will remain closed as Guests return on April 30th, over a year after its pandemic-related closure.

A guest on this week’s D23 Inside Disney Podcast, Ken Potrock has worked for Disney for more than 25 years in positions leading DVC, Adventures By Disney, and Disney Cruise Line. Other accomplishments include the transformation of Disney Springs and Commercial Products and Merchandise.

The podcast description for Episode 85 reads, “[…] Plus, Disneyland Resort president Ken Potrock on reopening the parks, surprising changes, slinging webs with Spider-Man, and when Jungle Cruise will reopen.”

On April 30th, 2021, Disneyland Resort reopens to guests that reside in California after 112 straight days of closure. Potrock looks forward most to riding Star Wars Rise of the Resistance and sharing the Park’s changes with Guests. Potrock commented on technology maximizing Guest fun, which is a positive change moving into the future and reimagining Snow White’s Enchanted Wish, which will be more approachable for all Guests, especially children to whom the ride is geared.

The most notable update discussed by Potrock with D23 (for this reporter, especially), is the Disneyland update of the classic, fan-favorite, Adventureland attraction: Jungle Cruise. Potrock starts his Jungle Cruise discussion around 28:00 minutes if you’d like to listen along to the full podcast on the D23 home site. Potrock thinks, (in all transparency):

“[…] that there were some very important things that were wrong in the attraction.  That we had depicted people and things in ways that in today’s environment, just quite honestly wasn’t as respectful as they needed to be. So we needed to go in and make some of those changes to the attraction, but at the same time respect the tradition of the ride. and really the core of the ride which are the skippers. And make them an even larger sort of centerpiece of the story. And so, not only did we fix some of thing things that needed to be fixed, but we enhanced the story in some wonderful ways centering around the skippers, and again, I think that’s just breakout. I don’t think there’s anybody that will come off that particular ride without a smile on their face.

And I think that the club that is the Skippers, by the way; the current Skippers, but also many Skippers from years past, were involved in helping us craft the story, and again, I think they’ve nailed it. So I’m incredibly excited about that and excited to be able to tell you that it will be opening this summer.

It should be noted that Jungle Cruise Skippers both past and present have been involved in the upcoming reimagining that we noticed last year. What wonderful growth for a legacy theme park ride that has such an incredible following and dedicated fans.

Hopefully, the Imagineers are hard at work making magic backstage and new scenes in Adventureland. Disneyland Guests will be able to see the full ride when it opens “this summer” according to Potrock. That could be as soon as June or possibly as late as mid-August.

Seeing as Walt Disney World Resort’s Jungle Cruise has already started to have changes made, we’re hoping that it stays on schedule to be finished later this year… perhaps by end of summer like Disneyland? Stay tuned to Inside the Magic for more Jungle Cruise updates!

Are you ready to set sail with the Jungle Cruise Skippers this summer at Disneyland Park? Leave us a comment (or a joke!) below!

Comments Off on Disneyland’s Jungle Cruise to Open “This Summer”