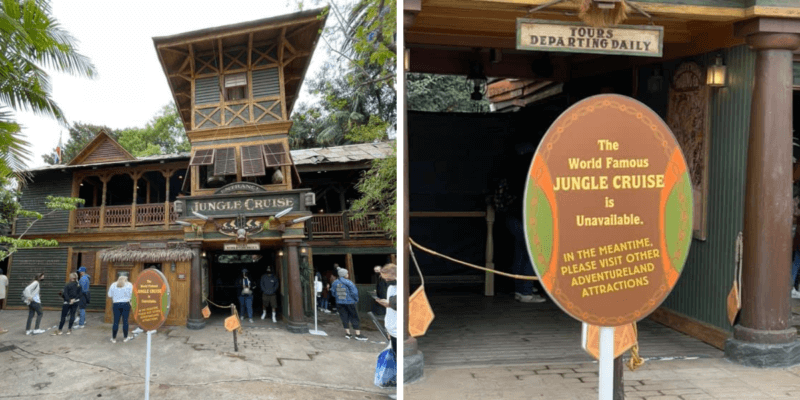 The work has begun on Disneyland’s Jungle Cruise! The exotic fan-favorite attraction has (and will) remain closed to Disney Guests during the extensive reimagining, unlike its East Coast Magic Kingdom cousin.

Opening later this summer, the Jungle Cruise now serves a new purpose while Imagineers tinker behind the curtain, but the fun is just around the river bend…

If you are walking around Adventureland, listen between the lion roars and drum beats. You might just hear a few construction noises behind the Jungle Cruise queue building. We peeked behind the Go-Away-Green colored scrim and could barely see the river was drained in order to allow the workers easier access to the mechanics of the animatronics and show scenes.

The queue is also occasionally serving to allow more spacing for Guests waiting to ride the Indiana Jones Adventure (this reporter’s favorite attraction at Disneyland Park). Though the CDC has relaxed guidelines, it is important to note that currently at Disneyland, the theme parks are still enforcing six feet of social distancing. If Disneyland decides to ease up on social distancing in the near future (just like Walt Disney World is), this area will most likely no longer serve for distancing but as of now, the six feet of social distancing is still in place, meaning the queue lines can extend extensively into other areas of the theme park.

Looking down from above on the walkways, you can see assorted construction supplies behind the faux walls, waiting to be used and helping to hold up the wooden fence wall. These are not visible from the ground view.

An enchanting addition to Disneyland’s Jungle Cruise building is the placement of this sign on the aforementioned wooden wall. An entire poster was created to show that the attraction is currently “out of service.” Detailed on the bottom of the poster in yellow font, it reads, “Resuming DAILY River Service this summer!” We’ll be ready to set “sale” for Trader Sam’s Trading Post!

In other Jungle Cruise and Adventureland news, Disney’s Jungle Cruise movie will debut July 30 in both theaters worldwide and on Disney+. Dwayne “The Rock” Johnson broke this news last week via his Instagram channel as well as in a Disney publicity release.  Just in case you are afraid of mixing the upcoming film with the classic theme park attraction, just know that the movie will not be integrated into the ride, even though Dwayne Johnson was involved in the attraction’s reimagining.

If you’re chomping at the bit to see the Jungle Cruise’s new look at Disneyland Park, contact the travel professionals at Academy Travel. While you might not get all the backside-of-water puns from these non-skippers, the crew will absolutely guarantee a fun adventure that you’re sure to write home about.

What are you most excited to see in the refreshed Jungle Cruise ride? Leave us a comment below!