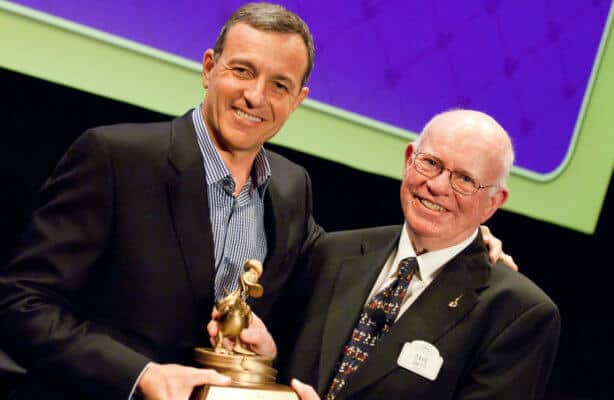 Late legendary Disney archivist Dave Smith will receive his own tribute window on Main Street in Disneyland, it’s been announced by Bob Iger. The window will be revealed on June 22nd, 2020, marking the 50th anniversary of the founding of the Walt Disney Archives.

Over his four decade long career, Smith wrote extensively on the history of Disney and was crucially responsible for transforming the company’s initially one-man archive team into a slick, well-documented archive of the company’s extensive history. He retired in 2010 but continued to act as an advisor under the role of Chief Archivist Emeritus.

In 2007, he was awarded the high honor of the Disney Legends Award, cementing his place in Disney history. Smith sadly passed away in 2019 at the age of 78, but he’ll forever be remembered as the ultimate authority on the history of the company.

Related: Robert Downey Jr. and James Earl Jones highlight the list of Disney Legends to be honored at D23 Expo 2019

Names assigned to the windows on Main Street are only afforded to a small set of people (often in the form of fictional entrepreneurs) who have contributed to the company, and it’s regarded as the highest honor that Disneyland Resort can bestow.

See Dave Smith’s biography from the Walt Disney Company below for the full insight into his legendary career;

Dave was hired in 1970 by Walt’s brother—and The Walt Disney Company co-founder—Roy O. Disney, and his first responsibility was cataloguing every item inside Walt’s office suite, which had been left untouched after Walt’s passing four years prior. Thanks to Dave’s meticulously detailed notes and records, the Archives was able to restore the suite in 2015, and today Disney employees are able to visit and draw inspiration from this remarkable space. During his time as Disney’s Chief Archivist, Dave grew the Archives from a simple one-person department to a model among corpo­rate archives. He was regarded by fans and historians as the final authority on matters of Disney history, and was an active member of the Society of California Archivists. He served from 1980 to 2001 as Executive Director of the Manuscript Society, an international association of collectors, dealers, librarians, archivists, and others interested in manuscript material.

Born and raised in Pasadena, California, the child of librarians and educators, Dave earned a B.A. in history and a Master’s Degree in Library Science from the University of California at Berkeley. Before coming to Disney, he gained library and archives experience working in the Manuscript Department of the Huntington Library in San Marino, California, interning at the Library of Congress in Washington, D.C., and serving on the staff of the Research Library at U.C.L.A.

Dave wrote extensively about Disney history, with regular columns in Disney fan publications and websites, as well as authoring, co-authoring, and editing numerous articles and books on Disney history, including the official Disney encyclopedia Disney A to Z, Disney: The First 100 Years, The Quotable Walt Disney, Disney Trivia from the Vault, and The Ultimate Disney Trivia Books 1, 2, 3, and 4.

In October 2007, Dave was honored with the prestigious Disney Legend Award. A resident of Burbank, California, Dave retired in 2010 after his 40th anniversary with The Walt Disney Company and continued working for the next nine years as a consultant for the Company, with the title of Chief Archivist Emeritus.

What do you think about the contributions of Dave Smith to the Walt Disney Company? Let us know your thoughts in the comments below.