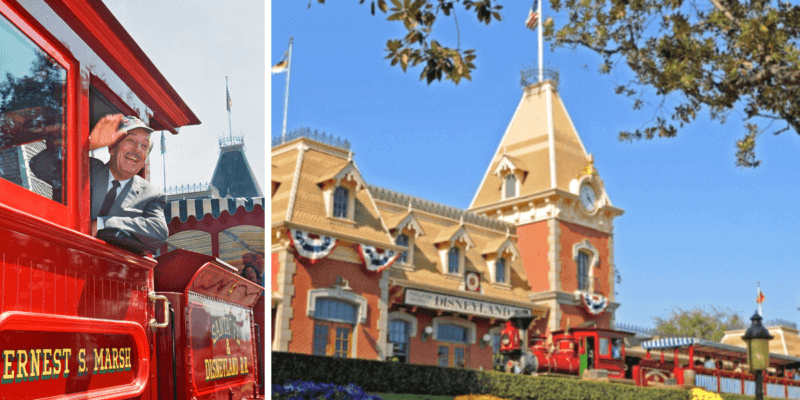 The Disneyland Railroad is an original opening day attraction at Disneyland park. Exactly 65 years ago on July 17, Disneyland opened to Guests, giving them the opportunity to take a ride on a true Walt Disney classic. Let’s take a closer look at the Disneyland Railroad, learn about its history, and share why this attraction is truly one of the most magical features of the Happiest Place on Earth.

“I just want it to look like nothing else in the world, and it should be surrounded by a train,” said Walt Disney when speaking of his vision for Disneyland.

About the Disneyland Railroad

The Disneyland Railroad is an attraction that has been at the Happiest Place on Earth since 1955. It is a true Disney Park staple, as it pays homage to Walt Disney’s love of trains. When Walt Disney was planning Disneyland decades ago, he knew that a train had to be one of the attractions available for Guests of all ages to experience and enjoy.

Over the years, we have shared memories with our friends and loved ones aboard the Disneyland Railroad. To this day, I can hop aboard the train and take a tour of Disneyland park just like Walt himself did all those decades ago. There is something so special and meaningful about getting to experience something so nostalgic.

Since opening day in 1955, more steam engines have been added to the Disneyland Railroad, and to this day there are five total. Want some fun facts? Disney provides us with some on the official website:

The 5 meticulously restored, working narrow-gauge engines were named after American locomotive legends. The lone exception is the Ward Kimball, named after the Disney Animator who originally inspired Walt Disney’s passion for the railway.

The Disneyland Railroad also gives us an inside look at some pretty amazing elements of Disneyland park. We get to pass through New Orleans Square, a land unique to Disneyland. We get to see actually inside Splash Mountain and see the majestic Rivers of America. And we even get to see the Primeval World, a Disney classic that was actually a diorama constructed by Disney for the 1964 New York World’s Fair. These are elements of the Disneyland Railroad that are unique to the southern California park.

You can read a bit more about the Disneyland Railroad as it exists today in the official attraction description below:

Steam along the banks of the Rivers of America and behold rugged landscapes inspired by 4 of America’s majestic rivers: the Mississippi, the Columbia, the Missouri and the Rio Grande. Each are carefully recreated, complete with indigenous rock formations, wildlife and picturesque waterfalls.

Between the Tomorrowland and Main Street, U.S.A. stations, a special treat awaits! See Walt Disney’s legendary dioramas of the Grand Canyon and Primeval World – Land of the Dinosaurs, where you’ll encounter a thrilling prehistoric land of towering Audio-Animatronics dinosaurs come to life.

The Disneyland Railroad Through the Years

The Disneyland Railroad has undergone some changes through the years, from minor tune-ups to track changes to refurbishments. Take a look at some of the photos of this beautiful attraction through history.

Here’s a look at all five steam engines.

This locomotive was named for Cyrus Kurtz Holliday, founder of the Atchison & Topeka Railroad (later the Santa Fe Railroad, established in 1859). This steam engine was built by WED Enterprises (now Walt Disney Imagineering) in Burbank, CA. It is inspired by Walt Disney’s model train engine, the Lilly Belle, which was the centerpiece of Walt’s backyard railroad, the Carolwood Pacific. You can view a model of the Carolwood Pacific at the Main Street Train Station. The Lilly Belle, some of the freight cars, and the caboose are now on display at the Walt Disney Family Museum in San Francisco.

Named for Edward Payson Ripley, who was the first president of the Atchison, Topeka & Santa Fe Railroad, this engine also built by WED Enterprises. Both the E.P. Ripley and the C.K. Holliday were opening day steam engines in 1955.

Named after Fred G. Gurley, who was president of the Santa Fe Railway from 1944-1957, the Fred Gurley joined the Disneyland Railroad in 1958, although it is the oldest steam engine. It was built by Baldwin Locomotive Works in Philadelphia, PA, in 1894

This engine was added in 1959 and was named for Ernest S. Marsh, who was the president of Santa Fe Railroad at the time. It was built in 1925 by the same company that built the Fred Gurley.

Nearly 50 years later in 2005, the Ward Kimball joined the Disneyland Railroad as the fifth steam engine on Disneyland Resort property. This engine was actually named for Ward Kimball, a Disney animator and one of Walt Disney’s “Nine Old Men.” He is well-known for the creation of Jiminy Cricket, a classic Disney character, among his other achievements. He was named a Disney Legend in 1989. Like Walt, Ward loved trains. The Ward Kimball engine was dedicated in 2006 as part of Disneyland Resort’s 50th anniversary celebrations.

A Closer Look at the Disneyland Railroad

Disney Parks Blog has shared countless beautiful images of the Disneyland Railroad through the years. Below are some of our favorites, which give a closer look at the attraction as well as some of the stops (the railroad makes stops at these four stations: Main Street, U.S.A., New Orleans Square, Mickey’s ToonTown, and Tomorrowland).

What is your favorite attraction at Disneyland Resort? Do you prefer the original attractions that were Walt Disney’s favorites, or do you love the newer, innovative rides of the 21st century? Let us know in the comments!

Click here to book your next trip to Disneyland Resort and see what dreams are made of at the Happiest Place on Earth!

Comments Off on The Disneyland Railroad: A Walt Disney Classic