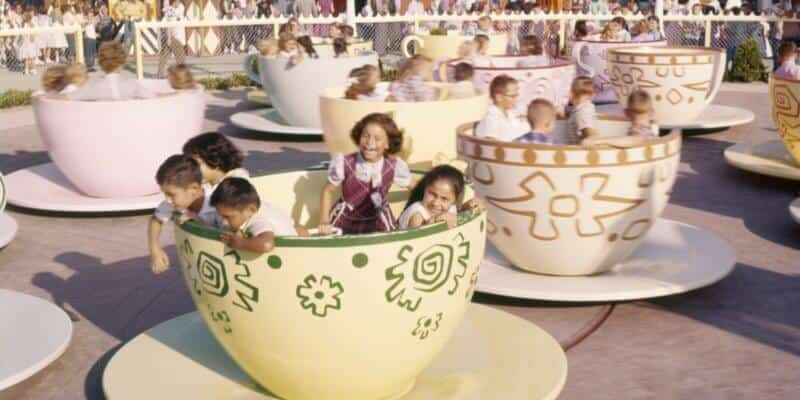 If you’ve ever done any reading on the subject, opening day at Disneyland in California might not bring a huge smile to your face.

Walt had magically transformed 160 acres of orange groves and $17 million into a brand-new theme park–the first park of its kind–Disneyland.

But opening day at the Happiest Place on Earth was anything but happy for many who visited, at least on the surface, and Walt must have wondered what he had gotten himself into. The day was so plagued with issues and problems, that July 17, 1955 came to be called “Black Sunday” by some of the Cast Members working at Disneyland that day.

Temperatures soared that day, and because the asphalt hadn’t yet fully set, it melted into a sticky tar substance, taking hold of the heels of ladies’ shoes left and right (pun intended). The opening of Disneyland took place right smack dab in the middle of a plumbers’ strike, which meant drinking fountains were sans water.

But plenty of water could be found flooding over the deck of the Mark Twain Riverboat which was filled to well beyond capacity, causing it to list from side to side.

Some of Disneyland’s attractions weren’t operating on that sweltering day in 1955, and this was disappointing to many children. Peter Pan’s Flight, Dumbo the Flying Elephant and the Rocket to the Moon rides weren’t up and running, and Tomorrowland, which was to depict life in 1986, looked eerily similar to life in 1955.

And it wasn’t just visitors to the theme park that saw the chaos.

Nearly 70 million of the 165 million people living in the United States tuned in to ABC for the 90-minute televised unveiling of Disneyland hosted by actor Ronald Reagan. The broadcast also featured Fess Parker (who played Davy Crockett in the “Davy Crockett, King of the Wild Frontier” series) riding a horse down Main Street U. S. A. and Sammy Davis, Jr. and Frank Sinatra taking a spin around the motorway on the Autopia ride.

But the problems had very little effect on attendance, if any, as Guests flocked to Anaheim to experience a piece of the magic for themselves. In just over six weeks’ time, Disneyland would see its one-millionth Guest walk through the gates.

We’ve got proof from that quasi-fateful day in 1955 that some dubbed “Black Sunday,” but to us, the evidence seems to point to smiles, regardless of the issues that Walt and his Imagineers must have been facing.

Families enjoyed attractions that realized their favorite Disney characters and made their stories come to dazzling life. Snow White’s Scary Adventures was one of the most popular.

Kids and adults alike could blaze a trail on the motorway at the Autopia attraction. The track was a full mile long. No frowns here.

The Mad Tea Party with the Mad Hatter, the March Hare, and the Doormouse from Disney’s Alice in Wonderland took on a whole new meaning once Disneyland opened. Guests of all ages were invited to join Alice and company for a spin in a vibrantly colored teacup.

On Opening Day at the Happiest Place on Earth, kids were also invited to take a cruise through the jungle along the Nile and Amazon Rivers. Gone were the days when seeing exotic animals meant flying to Africa and setting out on a safari. Just look at the jolly giraffes gazing down on the children aboard Disneyland’s Jungle Cruise attraction.

If families couldn’t make it to northwestern Arizona to hop on the back of a mule and take a tour of Grand Canyon, it was ok, now that Disneyland was open. Walt’s new theme park made it possible for Guests to take a mule-back tour of Frontierland.

And even though Disneyland’s Tomorrowland was a bit stuck in 1955, and not in 1986 as it was designed to be, it still opened with a pretty cool SpacePort.

There may have been issues with the drinking fountains and toilets on Opening Day at Disneyland, but the Golden Horseshoe restaurant was opened and offered food and drink to Guests. It was one of the very first restaurants opened at Disneyland.

The Golden Horseshoe restaurant unofficially opened on July 13, 4 days before the opening of Disneyland for a special occasion–the 30th wedding anniversary celebration of Walt and Lillian Disney. When Disneyland opened, the Golden Horseshoe had a children’s saloon inside for kids of all ages to enjoy.

From what we can tell, opening day at Disneyland really did bring smiles to Guests who were there to witness one of the most important days in the history of pop culture.

In fact, these pictures make us wish we had been there for opening day at Disneyland. You can almost see the magic in the atmosphere. We would have had a blast!

Were you there on opening day at Disneyland? Let us hear from you in the comments section below!

Comments Off on PHOTOS: A look back at Disneyland on opening day in 1955