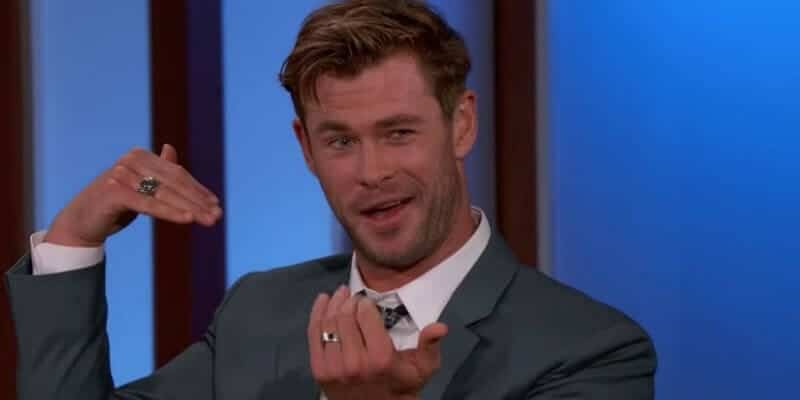 Chris Hemsworth, most known for fighting evil all across the universe as Thor, is coming under fire from his castmates after revealing the father took his daughter on a Disneyland ride even though she wasn’t tall enough.

In a recent press stop for “Avengers: Endgame,” Chris Hemsworth and his castmates all stopped by “Jimmy Kimmel Live” to discuss the new film, where Hemsworth also shared a comical story of how the father snuck his daughter onto a Disneyland attraction, which all his castmates and some fans on Twitter gave him slack for.

Last week, the Avengers united at Disneyland to celebrate a $5 million grant to benefit children’s hospitals, which the group spoke about on their appearance at “Jimmy Kimmel Live.” While discussing the benefit, Hemsworth also decided to share a story from that same appearance involving his daughter who really wanted to get on one of the theme park’s attractions (Guardians of the Galaxy – Mission: Breakout!), even though she wasn’t tall enough.

Hemsworth, who didn’t want to disappoint his daughter, decided to stuff her shoes with candy bars so she’d meet the height requirement. “So I grabbed a couple of Snicker bars and slammed it in the back of her shoe under the heel,” Hemsworth explained. “And they’re like okay, in you come,” said Hemsworth.

Hemsworth explained the story in a silly way. However, his castmate Scarlet Johansson was not fond of the story. “It’s wildly irresponsible as well,” she told Hemsworth.

Similar to Johansson, some fans on Twitter were not thrilled by the story and Hemsworth’s ability to bypass the park’s safety procedures. Although, some also thought it was hilarious.

@chrishemsworth @WaltDisneyWorld @JimmyKimmelLive Putting things in your daughter’s shoes so she can go on a Disney ride??? Really??? Those rules are there to protect your child! #ParentFail

CHRIS HEMSWORTH JUST SAID THEY TOLD HIS DAUGHTER SHE WAS TOO SHORT TO RIDE TOWER OF TERROR & SHE WAS SO SAD THAT HE SHOVED SNICKERS BARS IN HER SHOES TO MAKE HER TALLER. THEY WERE HAPPY THEY BEAT THE SYSTEM & FISTBUMPED AND RDJ IS SO MAD AT HIM FOR NOT BEING SAFE HAHA pic.twitter.com/nNF6pWaNLq

.Chris Hemsworth on Kimmel telling story of how his daughter wasn't tall enough for Guardians of the Galaxy ride at Disneyland so he stuffs some Snickers bars in her shoes so she meets the height requirement- ADORABLE

Chris Hemsworth shoved candy bars into his daughter's shoes so she'd appear tall enough to get on a ride at Disneyland.

Adjust your Chris rankings as needed.

During the interview, other cast mates also chimed in with their thoughts of disagreement. “I grab on to her, she is screaming the whole way down,” Hemsworth said.

In the end, Hemsworth did acknowledge that he had not made the best decision after all, to which Robert Downey Jr. responded “Maybe!” Hemsworth said he probably wouldn’t do it again, but let fans know that his daughter is “fine.”

What are your thoughts of Hemsworth cheating Disneyland’s rules and sneaking his daughter onto the Disneyland ride? Let us know in the comments below!