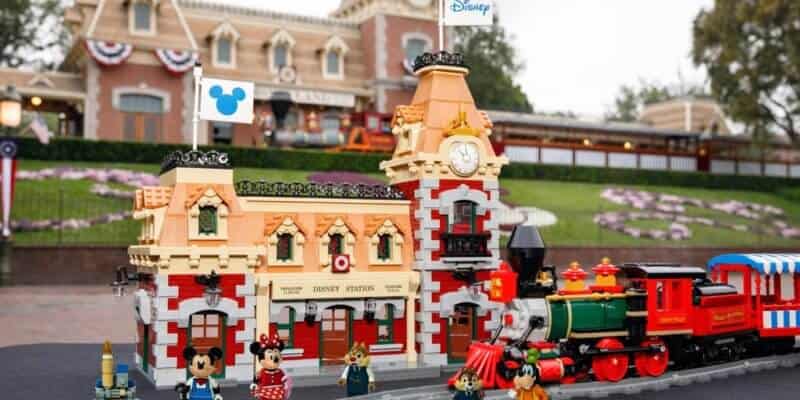 We don’t think we’ve ever seen a more realistic looking Disney Parks set from LEGO than this one. LEGO and Disney have done it again and created the playset of our dreams: a Disney train set.

While LEGO says that the Disney Train and Station set is modeled after the trains and stations that can be seen at various Disney Parks, from what we can tell it’s almost the spitting image of the Disneyland Railroad station at the entrance to Disneyland park in California. Yes, the LEGO colors are far more vibrant, but the structure and details are pretty much identical. Still, whether you’re a Disneyland fan, a LEGO fan, or a Disney trains fan, this is a set worth picking up.

The set is made up of nearly 3,000 pieces, with some being as detailed as a Disney Parks trashcan, and it includes Mickey Mouse in his full engineer uniform, Minnie, Goofy, Chip, and Dale. In addition to the mini-figures that look so darn cute in the station, the set also includes 20 pieces of both curved and straight railroad track, a full station measuring 15 inches tall, and a steam engine-style locomotive with three cars to attach behind it. You can even use the LEGO Power Up app to drive the train and recreate the fan-favorite Disneyland attraction.

Just look at the details:

The LEGO Disney Train and Station set will be available for LEGO VIP members beginning August 21 and for everyone else beginning September 1. It will retail for $329.99 and it’s sure to be popular, so sign up for the free LEGO VIP membership to get access to purchase the set next week. You can view all the details online here.

What do you think of this all-new set from LEGO modeled after the Disney Parks railroad stations? Let us know in the comments!