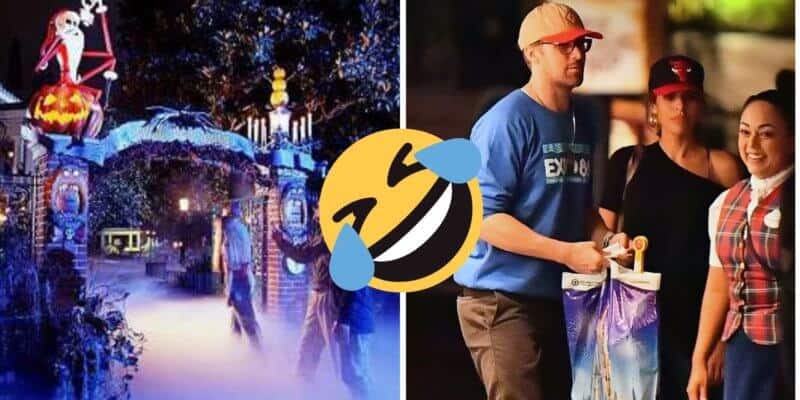 It’s always fun to see celebrities at any Disney Park. Usually, they are with a Cast Member guiding them though Magic Kingdom or Disneyland, and you might be able to snap a photo and tell your friends you saw the Jonas Brothers, but you can’t really interrupt their day and talk to them about it.

Well, what if you had the chance to chat with Ryan Gosling in a parking garage, would you ask him about Disney? Because that is exactly what these girls did.

Carrie Wittmer took to Twitter to post a Clevver News clip where Ryan Gosling had A LOT to say about The Haunted Mansion at Disneyland. The attraction is Gosling’s favorite, although when asked about how he liked the Nightmare Before Christmas overlay, Haunted Mansion Holiday, he became quite passionate.

“Im more about, Haunted Mansion… Im very upset about the Christmas time situation. They bring Christmas into Halloween? That’s a terrible idea. Let’s leave Christmas at Christmas. Cause at Halloween you want to go on the Haunted Mansion ride and do spooky things, and then at the end you’re in the doom buggy and you have a ghost candy cane next to you, that’s not scary.”

Ryan Gosling going OFF about the Haunted Mansion for 42 seconds pic.twitter.com/pVYkIbz0SV

The girls even tried to interject during Ryan Gosling’s Haunted Mansion monologue, but his hatred for the overlay overpowered any interruption.

Haunted Mansion Holiday is a popular overlay that takes over The Haunted Mansion attraction at Disneyland from Halloween through to Christmas giving the ride a Tim Burton twist! Nightmare Before Christmas enters the mansion and all of our favorite characters from Jack Skellington to Oogie-Boogie come out to play!

Do you agree with Ryan? Let us know!