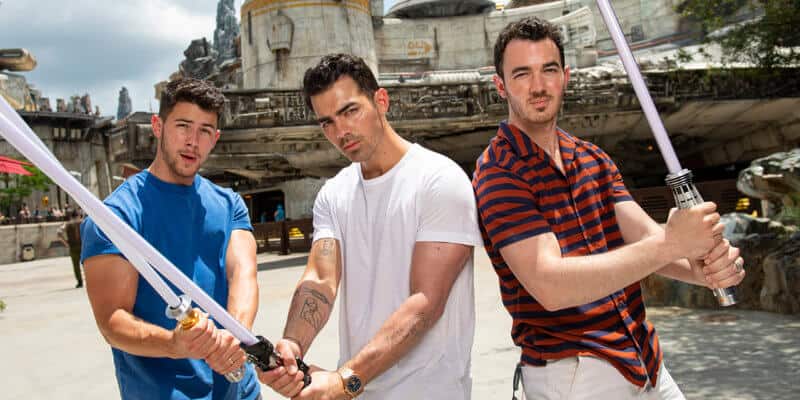 Walt Disney World’s Star Wars: Galaxy’s Edge is only weeks away from opening in Orlando, Florida! And in a special preview of the land, the Jonas Brothers–one of the most beloved boy bands of all time, paid it a visit and it was out of this world.

The band, which got its claim to fame under The Walt Disney Company, just got back from the intergalactic land while visiting with their families. Nick, Joe, and Kevin all experienced the land, taking in all of the many otherworldly experiences it has to offer. Pictured above, the Jonas Brothers can be seen posing with lightsabers in front of the new land’s attraction Millennium Falcon: Smugglers Run.

During their visit, the three even had a run-in with a some Stormtroopers. Luckily for the guys, it seems to have been quite pleasant.

During the Jonas Brothers’ time in the land, it goes without saying that the boys had to experience Smugglers Run. However, we’re not sure if the guys got to sample the blue milk. Currently, the intergalactic drink seems to be all the rage with cast members who have been experiencing the land in previews over this past week.

If you haven’t been following the brothers, you may not know that they’re currently on their Happiness Begins tour, which they just kicked off in Miami the night before their visit to Walt Disney World. Tonight, (Friday, August 9) the brothers have a stop in Orlando Florida at the Amway Arena. It’s part of a 67-city tour throughout North America and Mexico before the guys head over for more dates in Europe.

Will you be visiting Star Wars: Galaxy’s Edge at Walt Disney World when it opens at the end of this month? Let us know in the comments below!