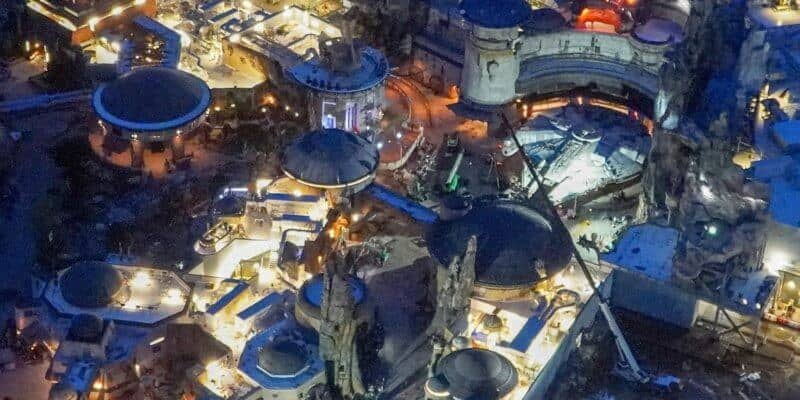 From a new series of images shared by Twitter user @Bioreconstruct, it seems Star Wars: Galaxy’s Edge is turning into the brightest land in the universe as construction continues on the Star Wars-themed land. In these new images, we don’t only see construction machines still overtaking the land but we also see themed lighting as well, highlighting its massive and stunning spires.

In the image below, we get a closer look at the Millennium Falcon: Smugglers Run, which depicts the fastest hunk of junk in the galaxy fully lit up! Lights can even be seen from inside the ship’s cockpit, which can be found closer to the center of the image.

A look at night construction near Millennium Falcon at Star Wars Galaxy's Edge DHS. Wouldn't you like to be the worker standing on roof of Oga's Cantina? (Lower right) pic.twitter.com/068nSzrCMa

This image gives a better look at the themed lighting coming to the spires in Galaxy’s Edge, which looks like an intense orange spotlight of some kind shining on the rocks. Additionally, the image also gives us a view of the Star Wars hotel, located right behind the themed land.

Construction has come quite a long way on the land and it continues as Cast Member previews approach. And according to Bioreconstruct, they could be as soon as only two weeks from today.

As we reported last week, Annual Passholder previews will be beginning in August for Platinum, Platinum Plus, and Premier Annual Passholders. For those who are not eligible for this special preview, don’t fret. Star Wars: Galaxy’s Edge will open at Walt Disney World on August 29. Also shared of the new land, its version of Star Wars: Rise of the Resistance is set to open later this year in December.

What are your thoughts on these stunning images of Star Wars: Galaxy’s Edge as it lights up at night? Let us know in the comments below!

All images featured in this article are from Twitter user @Bioreconstruct.

Comments Off on Star Wars: Galaxy’s Edge construction lights up the night at Disney World