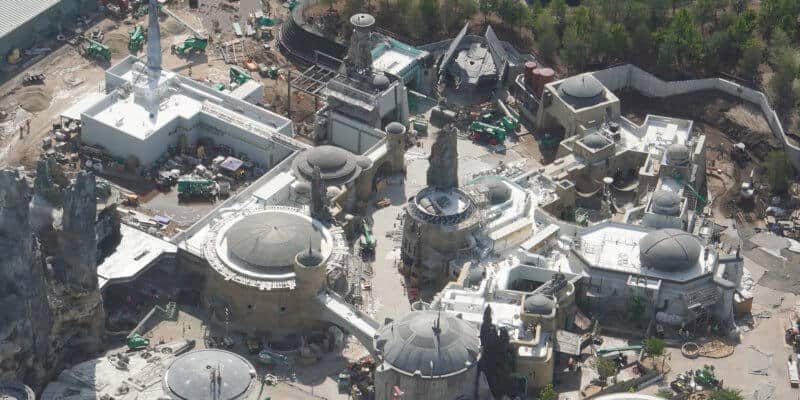 Star Wars: Galaxy’s Edge is only a few months away from its premiere at Walt Disney World and as the land’s debut approaches, so does the completion of its construction!

The land, themed after a galaxy far, far away, already made its premiere at Disneyland with a wildly impressive opening. And as the hype for the west coast version of the land begins to calm down, the clock is now starting to tick for Walt Disney World as their opening date is approaching.

Judging from these recently shared images from Twitter user @Bioreconstruct, it seems the company has made massive progress with the land. However, it also seems there is still work left to be done.

In the image above, we see that Millennium Falcon: Smugglers Run looks just about ready to blast off! Although, from this image, it seems that construction of the exterior of the attraction is still well underway, in addition to some of the other facades found around the other-worldly ride.

In this next image, we see that this petrified tree is complete, but the area around it still requires a little bit of work. Scaffolding, construction debris, and steel beams point to some of the work still required to finish off the land.

In defense of Walt Disney World, the new land isn’t set to premiere until the end of August, which gives the company about two months to tie up these loose ends. With the construction of any project this big, it’s probable that construction will be taking place on the land right up until its premiere date.

Below is an image comparing the Tie Echelon ship at Disneyland’s Galaxy’s Edge with Walt Disney World’s.

Aerial of Black Spire Outpost in DHS. It's fascinating to see this under construction, and also completed just 2 weeks ago in Disneyland. Clockwise from top, Dok-Ondar's, Oga's Cantina, Milk Stand, Droid Depot, Savi's Workshop. Can you spot a future shops? pic.twitter.com/ejgzh5Rv8R

Star Wars: Galaxy’s Edge is set to premiere at Disney’s Hollywood Studios August 29. Do you have plans to pay the new land a visit? If not, we suggest you contact our preferred travel agent partner Academy Travel! They can not only book you a reservation for this experience but they can also offer you expert advice and a no-obligation quote on a dream vacation. Academy Travel provides their services at no extra cost to you and you can click here to get a no-obligation quote and discuss your vacation with a Vacation Planners at Academy Travel.

What are your thoughts of the current construction status of Star Wars: Galaxy’s Edge at Walt Disney World? Let us know in the comments below!

All images featured in this article are from Twitter user @Bioreconstruct.